Would You Drink Your Latte Out of a Cup Made From Coffee? | Civil Eats

Would You Drink Your Latte Out of a Cup Made From Coffee?

The makers of the c2cup are brewing up a new solution to coffee waste, and a solution to the K-Cup. 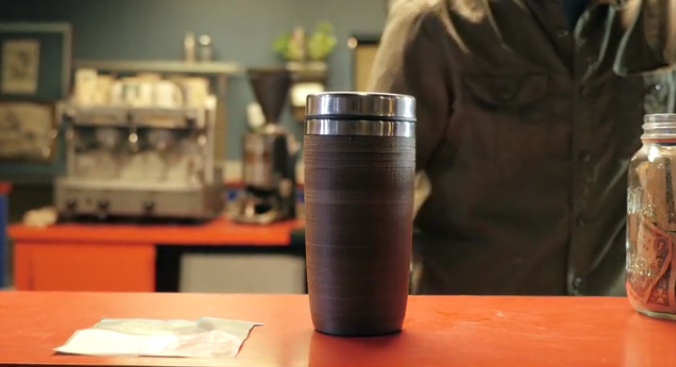 There is a great deal of waste behind your cup of coffee. Last year, researchers at the University of Bath in the UK found that a small coffee shop throws out roughly 22 pounds of used coffee grounds per day. In January, a satirical short film called “Kill the K-Cup” went viral, projecting a dystopian future overrun by the non-biodegradable, landfill-clogging, coffee-brewing pods. And just this month, the inventor of K-Cups publicly apologized for his innovation, telling The Atlantic, “No matter what they say … those things will never be recyclable.”

While some coffee drinkers work to reduce waste on the consumption end by buying reusable, compostable and, even (seed-embedded) plantable coffee cups, waste on the production end is a lot tougher to tackle. Enter the c2cup, a cup itself made from coffee waste.

The cup, designed by an engineering firm in Fargo, North Dakota, is made not from grounds used to brew the beverage, but from the coffee chaff, a byproduct derived from roasting, and an unregulated residual that usually goes straight into landfills.

“There is a waste stream generated from coffee during the roasting process that most roasters just have to get rid of—you know, municipal waste,” says Chad Ulven, co-founder of c2renew, the four-year-old company behind the c2cup. Coffee chaff is occasionally repurposed by sustainably minded roasters into livestock bedding, animal feed supplements, mulch, and compost, but usually in very limited quantities.

While statistics on how much chaff is produced in the U.S. or worldwide are difficult to come by, Ulven’s business partner Corey Kratcha says that the commercial-scale roaster where they source their chaff churns out “roughly 2,000 pounds per week of this material that would go to the landfill.”

Coffee isn’t Ulven and Kratcha’s first creative use of food byproducts. They’ve also made biocomposites with sugar beet pulp, nutshells, and sunflower hulls in an effort to design greener alternatives to chemically derived materials, which other companies have subsequently used to build everything from engine parts to compostable toothbrushes. But coffee holds a special place in their hearts. Ulven and Kratcha say it’s their favorite beverage, next to beer, and they think it’s a material to which many consumers can relate.

To make the c2cup, Ulven and Kratcha hybridized coffee chaff with a cornstarch-based resin, producing an all-natural plastic. They fashioned that material into a thin filament, then ran it through a 3-D printer, resulting in a detachable, compostable, heat-resistant shell that’s wrapped around the kind of stainless-steel insert typically found in travel mugs.

“Our material matches the same performance as petroleum-based products,” Ulven says. Plus, it looks just like coffee. “We want the consumer to see the natural aesthetic of the material; that earthy, organic, visual appeal and those variations and imperfections,” adds Kratcha. “We want you to be able to see the base of that biomass, that fiber content coming through the resin.”

Ulven and Kratcha also want to take their coffee resin biocomposite one step further. Despite K-Cup inventor John Sylvan’s insistence that it can’t be done, they believe their material can serve as an eco-friendly replacement to the plastics currently used in coffee-pod manufacturing.

Working with multiple kinds of material for the cup and the lid could pose a challenge. “For the cup, you need base resins that can handle these higher-temperature heat cycles when you’re brewing coffee. You need certain additives to address that, but we have those additives in the cup already,” says Kratcha. That’s why he and Ulven are currently in discussions with Keurig Green Mountain, which owns the K-Cup brand, but it’s also why they’re talking to a competitor that is “tired of these things going to landfills and looking to create something that is 100 percent bio-based,” he says.

The c2renew founders have less than a week left to raise nearly $75,000 on their current Kickstarter campaign for the cup, but Ulven and Kratcha are also in discussions with major coffee chains about selling the cup in stores.

“If the campaign doesn’t reach its goal, we’re still going to make the cup,” says Kratcha. In fact, they insist that raising money is secondary to raising awareness about how biocomposite material can add value to a food commodity’s waste stream.

“We’re focused on this ‘whole plants’ kind of philosophy,” says Ulven, referencing the nose-to-tail “whole animal” movement. “We’re taking residuals from plants, so there’s always a fresh supply. If farmers could sell food, and then sell the byproduct to people like us, they would be able to diversify their crops.”

“We want to create a really interesting and innovative product, but we also want to create an avenue to highlight bio-based development,” adds Kratcha. “That’s actually what the cup was intended for.”

The c2cup isn’t available commercially yet, but Kickstarter donors who invest $20 will get one in the mail later this year.

Rose Maura Lorre is a Montreal-based writer whose work has appeared in The New York Times, Salon, Dwell, Esquire.com and Eater, among other publications. In 2005, she received an award for Best Restaurant Criticism from the Association of Food Journalists for her writing in St. Louis' Riverfront Times. You can follow her on Twitter at @rosemauralorre. Read more >