In Vermont, a Slaughterhouse Invites an Audience | Civil Eats

In Vermont, a Slaughterhouse Invites an Audience

Would you visit a meat packing plant with a viewing room? 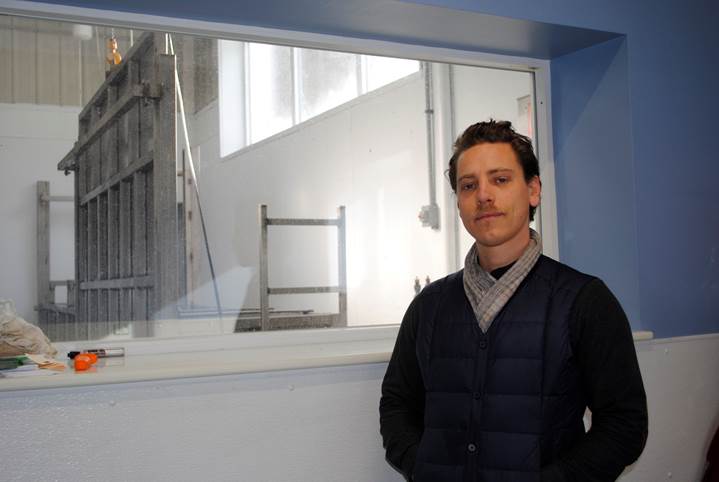 The Vermont Packinghouse doesn’t have a single window on the outside, save on the front door of the main office. This is especially ironic, because the slaughterhouse has something unique on the inside: public viewing windows that allow visitors to observe how animals become food.

I peered through that office window when I arrived at the newly opened meat plant last fall, looking for managing partner Arion Thiboumery, but all I spotted were a couple of desks strewn with files. A few back issues of Meatpaper, the now-defunct Bay Area magazine for meat-loving hipsters, lay on a side table in the office, indicating this wasn’t your traditional slaughterhouse.

The office door was locked, so to find Arion I circled the entire building, which is located in a light industrial park in North Springfield and looks a little like a Soviet-era apartment complex. Around the back, I eventually found an unlocked door and stumbled into a small room next to the slaughtering floor—an area that in most meat plants is quite off-limits to visitors.

I spotted a sanitation worker who eventually found Arion, and the plant’s 33-year-old managing partner greeted me wearing bright yellow muck boots and a hair net. Arion makes up in charm for what the building lacks of it, and after greeting me cheerfully he took me on a tour of the plant and showed me what might be its most unique feature: the “glass walls.”

When a Minneapolis blogger described her 2010 visit to what is possibly the only other slaughterhouse in America with a public viewing window, Minnesota-based Lorentz Meats, she wrote: “The mood was sober and respectful, but stopped short of being either sad or sentimental.”

One person, she went on to write, was visibly shaken by seeing activity on the kill floor, but others were parents who brought their children along, “clearly intending for them to learn the whole story of where their food comes from.”

Uber-transparency is the norm at both the Vermont and the Minnesota facilities because the owners are serving customers of the 21st century local food movement, who expect openness about all facets of food production. Other Vermont slaughterhouses are open about their practices, too—but they don’t have windows.

“In a lot of the older plants in Vermont it would be hard to make a structural change like that,” says Chelsea Bardot Lewis, business development administrator at the Vermont Agency of Agriculture. But she adds that a number of local slaughterhouses would not turn away someone with a genuine interest in seeing their process.

Arion, for his part, used to be a self-described “do-gooder academic type,” having earned a PhD in rural sociology and sustainable agriculture with a minor in meat science, but he turned to more hands-on projects at Lorentz because, “At the end of the day, if new food systems are going to happen, people have to come in and run businesses.”

According to interviews conducted for a 2014 Vermont report on consumer valuation of meat processing, a handful of local meat professionals agreed that “consumers don’t want to think about the slaughterhouse, regardless of whether it is local or not,” and they’re definitely not interested in the details of animal processing.

But for those who want to observe it—an act that can require courage and vulnerability, but that can ultimately spark greater respect for animals, for meat, and for meat industry workers—Vermont Packinghouse quietly offers the opportunity, and with some degree of pride. Says Arion: “This is a clean facility, we’ve got good animal handling, and we’re committed to having people come here.”

Anyone who calls in advance or stops by during business hours can be let in to observe, through the two small windows, the process by which live animals become food: the quick shot that renders the animal desensitized to pain; the hoisting of the animal by its legs, so it can bleed out; the splitting of the carcass; the removal of the hide and the insides.

No animals were being slaughtered on the first day I visited, but on a second visit I watched a large veal calf from Lisa Kaiman’s Jersey Girls Farm going through the process.

It took less than 30 seconds before the kill floor foreman, Cory LaCroix, managed to quiet the animal enough to place the captive bolt gun to its forehead and immediately desensitize it to pain. The animal did writhe, but Arion explained that this is because the cow’s cells and nerves in the individual muscles can remain active for two hours after death. (Workers confirm whether a stun was successful by touching the animal’s eye—if the animal doesn’t flinch, the stun was a success.)

The calf was then shackled by its hooves and hoisted upside down. As “Sweet Home Alabama” played on a radio, Cory and other workers bled out the carcass, split it in two, and removed the hide. Arion likes to say the Packinghouse uses “everything but the moo,” so the hide would go to JC Rendering out of New York State, the organs would be turned into offal, and everything else not given back to the farmer would be rendered and turned into pet food.

Outside, there are holding pens for the animals that were designed by Temple Grandin’s firm, so they meet the high standards that Grandin, a pioneer in humane livestock handling, has set. High walls and a horseshoe design keep animals calm as they walk through. The entire plant has been positively reviewed by Animal Welfare Approved.

When I asked Cory if it feels weird to have people watch him work, he said “Naw. This isn’t our first tour comin’ through!”

Indeed, since the plant opened last fall, the largest tours have consisted of a few dozen college students. Farmers also come to observe the facility where their animals’ lives will end.

“I want the best start for them and the best life and the best end—then I know I’ve done my job as a responsible farmer,” Lisa Kaiman told me. “So to find someplace that has also thought through that whole process is really important.”

Vermont Packinghouse isn’t the only new slaughterhouse on the Vermont food scene. At least four others have opened or changed ownership in the last five years.

According to Chelsea Bardot Lewis of the Vermont Agency of Agriculture, what the Packinghouse represents, with its state-of-the-art facility and close partnership with Black River Meats, is a statewide move toward greater collaboration between meat producers (the farmers and food companies) and meat processors (the slaughterhouse owners and butchers).

In Vermont’s small meat plants, Chelsea says, “processors are more in touch with what’s going on at farmers’ markets and what the end user wants, and producers are realizing there are skilled meat cutters across Vermont with whom they can create deeper partnerships. We’re definitely seeing greater professionalism and customer service.”

In the meantime, the daily work that goes into putting humanely raised, ethically slaughtered meat onto tables goes on, with all of it very much on display at Vermont Packinghouse.

As I left the small room where I had observed my first industrial slaughter, I spotted a small sign that said photography of the processing area was not allowed—which made sense. It’s always better to see new things with your own eyes.

A longer version of this post first appeared on Vermont’s Local Banquet.  Photo by Meg Lucas.