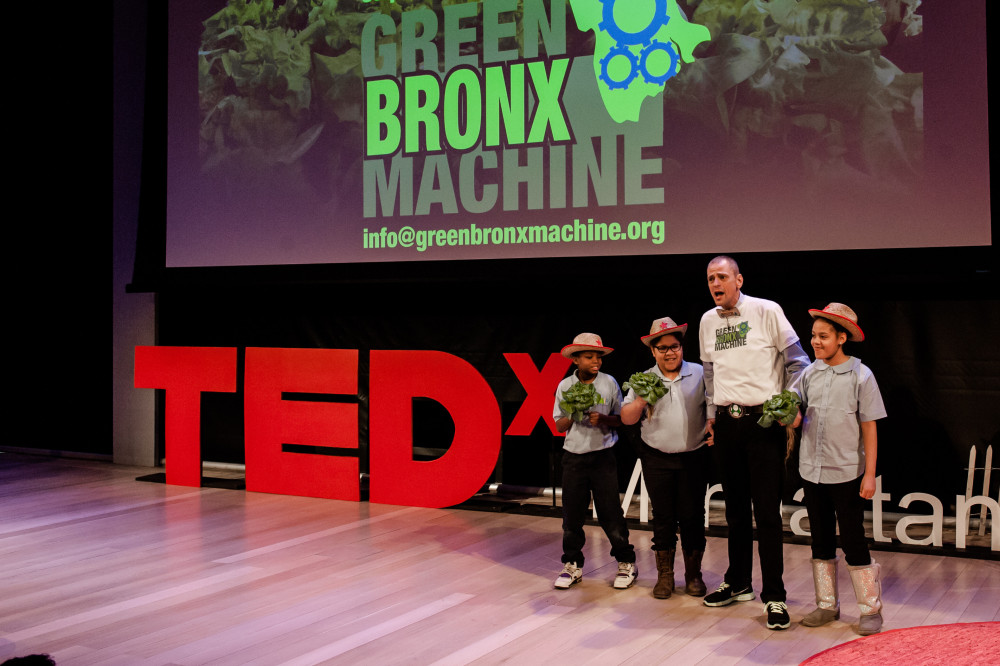 “The food movement needs money,” announced Shen Tong to hundreds of attendees at last weekend’s TedX Manhattan. He paused, thanked the crowd, and pretended to walk off the stage as if to end his talk there. “That’s probably the shortest TED talk you’ll ever hear,” he said. Virtually everyone at the one-day conference clapped and cheered at the investor and Food-X founder’s point (and it wasn’t the end of his talk). And while the food movement does need investment, it’s not as simple as writing a check.

For the last five years, a select group of food movement luminaries has flocked to this annual event, where they invest time in a larger conversation about solutions to an ailing food system. TEDx Manhattan’s theme “Changing The Way We Eat,” hasn’t changed, but it remains full of new energy and ideas.

Here are some of the highlights of the day (see the full list of speakers here): 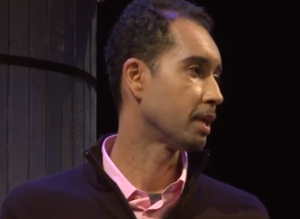 Anim Steel asked two questions of the crowd: “What would it mean to have a vision of the food movement that is as deep as the problem?” And: “How can we break through big structural problems with bold structural moves?” Steel is the founder of Real Food Challenge, a non-profit that hopes to take $1 billion of college food funds and direct them to local, fair, and sustainable sources over the next 10 years. He laid forth what he sees as essential ideas to get us there: Expand the base of people who own farmland, inspire people to take leadership in their communities’ futures, and find linkages between separate causes. But his vision is broader than food. “If we’re successful, we won’t just change the way that we eat. We’ll change the way we live and treat each other,” he said.

“Why does organic food cost more than conventional?” asked Ali Partovi. One reason is that the demand for organic has outstripped our supply. Between 4-5 percent of the food we eat in the U.S. is organic, but only 1 percent is actually grown here. Until we have more organic farms producing more food, says Partovi–an investor and partner in Farmland LP, which converts traditional farmland to organic–we’ll continue to depend on countries like India and China to fill the gaps. “We need both business innovation and policy change to support organic food,” he said.


Stephen Reily, the director of Seed Capital Kentucky, talked about the hunger many Americans feel to “rebuild a sense of community between farmers and ourselves.” Reily is behind FoodPort in West Louisville, a project that is being called the nation’s largest food hub.  The all-in-one concept would place existing food businesses along the local food supply chain–everything from a farm to a packing plant to a restaurant and compost facility–in a collaborative model of shared resources and assets. This is Reily’s second project, but through his first, which was a simpler food hub, he learned the following  lessons: 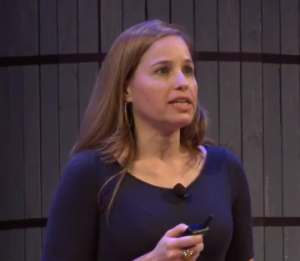 Michele Merkel of Food & Water Watch was one of the standout speakers. A lawyer for the U.S. Environmental Protection Agency (EPA) until she was asked to stop investigating a concentrated animal feeding operation (CAFO), Merkel said:  “I quit my job at the EPA, because I couldn’t do my job; and now I sue them. The factory farm fight is pitting neighbor against neighbor, family against family all across this country.”  Why? Because 15 years later the farmers are still suffering from the same facilities and it’s becoming increasingly difficult for citizens to obtain justice in all three branches of the government,” she said. Merkel didn’t mince words when she challenged everyone watching to go from being a passive eater to a food movement organizer. “Eaters must join farmers to save America’s food system and restore democracy,” she said. 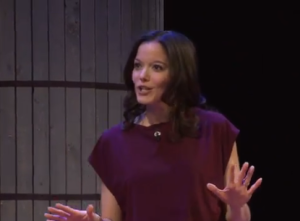 Deb Eschemeyer, FoodCorps co-founder and the first lady’s new right hand woman in charge of the Let’s Move Campaign did five pushups for the TEDx Manhattan audience, as part of the new “Give Me Five” campaign. She also spoke to the value of reaching across the aisle to protect school lunch. “There is nothing Democrat and there is nothing Republican about making sure that our healthy school lunches match scientific recommendations. That is not a partisan issue.”

Stefanie Sacks began her talk with a video about what it’s like to be a busy mother of two. The real-life footage showed her pushing a shopping cart down the aisle and negotiating with her son about the juice and sodas he wants her to buy, as she nimbly refuses. While food companies boost their bottom line by advertising to children, Sacks believes that “our health is nobody’s bottom line but our own.” The culinary nutritionist and author of What The Fork, argued that “small changes in food choice will make big everyday differences.” 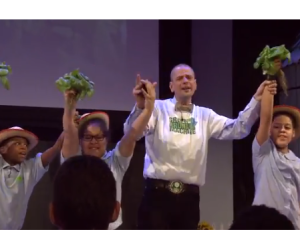 In a flow of non-stop words and energy, Stephen Ritz, winner of the Tedx Manhattan award for his farming education work at PS 55 in the Bronx, called the crowd his “equity warriors,” and referred to the students as his “harvest.” The self-named Green Bronx Machine gave an impassioned speech elaborating on his mission “to teach kids about food, where it comes from, and how it’s related to academic performance.” Named as a finalist to the Global Teacher’s Prize, Ritz shared his plans to send kids home with bags of groceries every week from his classroom , which he refers to as “the National Health & Wellness Center.” “It is easier to raise healthy children than fix broken men, dammit! And that’s why I’m putting my stake in the ground.”

Kendra Kimbirauskas,  from Socially Responsible Agriculture Project (SRAP), talked of our need to get on “common ground” and declared that in-fighting over whether to eat ethical meat, go meat-free, or advocate for bigger cages, is fracturing the food movement. “As long as animals are in factory farms they’re polluting our environment,” she said. She reminded the group of a core law of organizing: those most impacted by the problem need to be most visible in the fight to change it. “That’s why we need farmers to be standing out front and asking for change. And, because we all eat, consumers are the strongest constituents out there,” she said.

“Sustainability is a food system that doesn’t lurch from one crisis to the next,” said Danielle Nierenberg, the president of Food Tank, who described herself as a pollinator. “I like to spread information and solutions that are working on the ground.” This comment was in reference to her recent work in Sub-Saharan Africa and her focus on talking exclusively with women farmers to learn how they are getting by and what they needed to succeed. “Change,” Nierenberg said, “Will be lead by real actions and conversations with women farmers.”

10. Nikiko Masumoto on the Importance of Training New Farmers 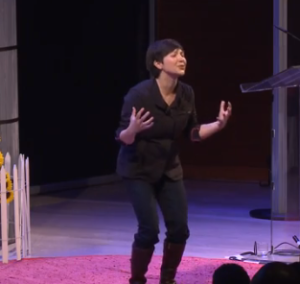 The day wrapped with Nikiko Masumoto, artist, storyteller, organizer, and farmer. Masumoto spoke of growing up on a small fruit farm in California’s Central Valley and the challenges her family has faced. She then brought up the need for new farmers, pointing to the fact that, according to the U.S. Department of Agriculture, nearly half of all farmers will retire in the next decade. She spun a dream-like story for the audience about the NFL. Not the National Football League, but the “National Farming League.” “Draft picks, sold out farming stands, scalpers outside Whole Foods, people would sleep outside of farmers’ markets, farmers would give guest appearances, imagine who would feed us.” The fantasy went on until nearly everyone (including this writer) was doing some combination of crying, laughing, clapping, and cheering.