In Nebraska, a Battle Over Corporate Pork Ownership | Civil Eats

In Nebraska, a Battle Over Corporate Pork Ownership

Most states in the Midwest now allow meatpacking companies to own hogs and contract with farmers to house and feed them. Nebraska is one of the last states to prohibit the practice as a way to protect family farms. 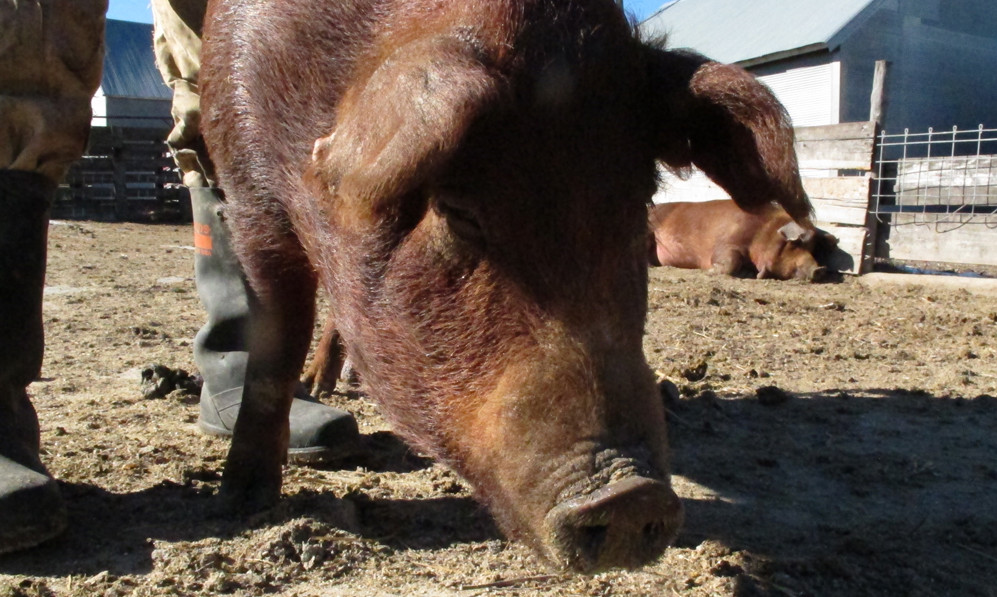 A proposed change to livestock rules has put Nebraska hog farmers at the center of a debate that gets to the very core of what it means to be a farmer today.

In the top pork producing states like Iowa, Minnesota and North Carolina, many farmers are under contract with giant meatpackers like Tyson or Smithfield Foods – the companies actually own the pigs and pay the farmers to raise them. That arrangement is illegal in Nebraska.

Like many other Midwest states, Nebraska barred corporations from owning livestock in the late 1990s in order to protect smaller farm businesses. After a slew of court challenges, Nebraska’s ban on meatpacker-owned livestock is one of the only laws still standing. And a bill introduced in the state’s legislature seeks to change that.

Meatpacking companies can keep costs down by owning hogs from birth to slaughter. Some hog farmers want to allow corporate ownership in the pork industry to help boost the rural economy. Opponents, however, say it puts too much power in the hands of packing companies.

Hog farmer Terry O’Neel says it’s time for Nebraska to allow corporations to own pigs. When he looks at the scope of the pork industry, he sees Nebraska losing ground to other states that allow it. Especially Iowa, Nebraska’s neighbor and the top pork state in the nation.

On a frigid afternoon, the winter wind cut across O’Neel’s farm near Friend in eastern Nebraska. But his pigs didn’t feel the chill. They were tucked away in heated steel barns across the yard from his home.

“We just weaned approximately 500-head of pigs today and they’re in a facility that’s about 85 degrees,” said O’Neel as we ducked into his farm office to get out of the cold. “Just like being in the Caribbean.”

O’Neel started out in the hog business in the mid-1980s, feeding 40 pigs on dirt lots. But gradually, the industry changed and it started to make economic sense to raise many more animals at a time. O’Neel’s farm changed with it. He started building the long, steel barns that dot the rural landscape. Each building can feed hundreds or thousands of animals. With 7,000 hogs on his farm, he still considers himself small compared to some of the hog feeders in Iowa.

Both Nebraska and Iowa have lost thousands of hog farms in the last 20 years, but Iowa has added millions of animals at the same time. That’s come with some environmental challenges, but what bothers O’Neel is a lot of Iowa’s pigs are processed in Nebraska packing plants.

Nebraska State Sen. Ken Schilz of Ogallala, says that policy is getting in the way of rural growth.

“(Nebraska has) been in population decline for the last 50 years,” Schilz said. “So we’d better start doing some things to entice people to come back.”

Schilz introduced a bill which would lift the packer ban on livestock ownership, but only for hogs, not cattle. It’s a slightly different version from a bill he introduced last year. And it’s part of a package of proposals aimed at growing Nebraska’s livestock industry. Another bill would standardize the county zoning process, while also creating a state board that could review rejected siting permits for livestock facilities. A third bill would create economic incentives for counties to attract livestock operations.

The idea behind allowing farmers to contract with pork processors is to provide another source of income for farm families who may not have enough land to bring a son or daughter back in the business.

Schilz says with packer contracts, more young farmers could get loans to build hog barns. Critics say that would mean giving up control over the most valuable part of the farm, the livestock.

Traci Bruckner of the Center for Rural Affairs says Nebraska’s ban on packer ownership prevents meat companies from dominating the pork industry the way they do the chicken industry. She says consumers might not notice, but you can see the results in farm country.

“We think farmers should own livestock in the state, not packers,” Bruckner said. “If vertical integration was the answer rural America would be a paradise, and it’s not.”

Instead of more hog buildings on fewer farms, Bruckner and others want to see more farms adding smaller numbers of pigs. Bruckner says promoting packer-owned livestock would make that harder for farmers like Ryan Schieffer.

Schieffer sells a few hundred hogs each year from his farm near Crofton in northeast Nebraska. His operation is a throwback, considering where the hog industry is today. The animals wander in and out of open sheds that have been around for decades. He feeds them by filling and carrying buckets by hand.

“I see that old barn with rusted tin on top but it still shelters those girls just fine,” Schieffer said as he carried two buckets into a hog pen.

Until recently, Schieffer was still trying to sell his animals to big packers for commodity prices. But that traditional cash market barely exists today.

“It’s gotten to the point where that’s not working anymore,” Schieffer said. “It worked in my dad’s generation, but no, it doesn’t fly now.”

“You can do a lot with a little if you want to raise them this way, but, it’s not just ‘Take these to Tyson, or Smithfield,’” Schieffer said. “You have to find your own markets. That’s where it gets tricky.”

As the pork industry becomes more concentrated, small and mid-sized producers are forced to either get bigger, get out, or get into a niche market.

Taking away Nebraska’s packer ban would give farmers another way to grab a share of the pork industry. But the concern is whether that could actually leave hog farmers with fewer ways to compete in the long run.

This article originally appeared on the Harvest Public Media website.