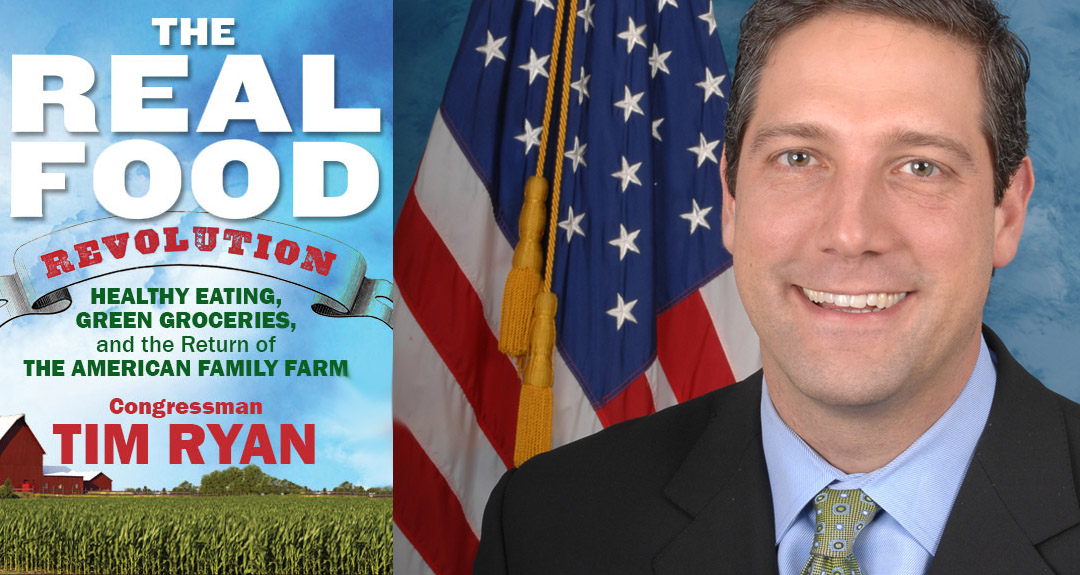 When it comes to changing the food system, Tim Ryan (D-Ohio) might be the most outspoken member of Congress yet. Now in his sixth term, Ryan is the author of Real Food Revolution, Healthy Eating, Green Groceries, and the Return of the American Family Farm. Former President Bill Clinton describes the book as “a straightforward and much-needed prescription to help transform our country’s food systems and improve our well-being.”

We spoke with Congressman Ryan about added sugar, the farm bill, and his guilty food pleasures.

In Real Food Revolution you detail our broken food system. Do you have one “big idea” that concerned eaters can rally around for change?

Shift subsidies. We’re now subsidizing crops that are leading to highly processed foods made with high fructose corn syrup and soy oil because we’re making those crops and those products artificially cheap with taxpayers’ dollars. That’s leading to a great deal of sickness in our country. In five years, half the country is either going to have diabetes or pre-diabetes. If we took those billions of dollars from subsidizing those particular crops and we shifted them to farmers so that they could grow fresh fruits and vegetables, I think we would move in the direction of having healthy foods be affordable and accessible to all Americans and therefore use that food as our medicine to bring down health care costs.

What do you say to the farmers and their lobbyists who like the current subsidy system?

I think farmers will be fine as long as we say, “we just want you to grow something different and we’ll help create a market for you.” Our public institutions, our schools, our universities, and our prisons all spend a good deal of money on food budgets. So if we increased locally sourced fresh fruits and vegetables, lean meats, etc. [through subsidies] and tied the local farmers into those institutional markets, then they would have a place to sell the food.

You have the food industry that can push back, but I think there’s a place for all of them in this new system. The bottom line is we’re a sick country and they need to do their duty to make sure that we move the system in a healthier direction.

I’m sure there will be some big fights about it, which is why I’ve spent a good deal of time trying to rally people around the country to be a part of the movement, and so their members of Congress–whether they’re in Kansas or Ohio or New York City–have the political support to go out and push this change.

Highly processed food is the main culprit. And added sugar. Take a container of yogurt. It says 24 grams of sugar on the label, but you have no idea what that means. There’s no daily allowance next to it either.

One of the simple things we’ve done is sent a letter to the U.S. Food and Drug Administration (FDA) asking to convert these grams into teaspoons so that the average American can actually understand that there’s four grams of white, granulated sugar in every teaspoon. All of a sudden the average mom or dad out there buying it says, “Wow, that’s six teaspoons of sugar?”

I can’t picture myself giving my child six teaspoons of sugar and expecting them to behave normally. We wonder why they are bouncing off the walls. Then we discipline them or they try to sit in a desk and learn algebra. We’re setting these kids up for failure.

Consumers appear to be waking up, as evident in the decline of junk food sales and McDonald’s recent announcement that it is phasing out antibiotics in chicken. But there’s little evidence that federal policy will catch up any time soon. How do we make change in Congress?

You’ve got to build out the organic political movement that’s happening all across the country. Until you do that Congress is removed because there’s pressure to do other things on other areas and if you don’t get their attention and apply the political pressure, you never can get it done.

You have two revealing stories in your book about interactions with Ohio farm bureau members and corporate food lobbyists who were angry when you voted against the last farm bill. Conventional wisdom dictates Democrats with that type of voting record in agriculture states like yours don’t last long in Congress. How do you pull it off?

They were upset that I didn’t vote for the farm bill, but we’re with them on a lot of other issues and we are respectful of what they do. I explained that I voted against the bill because it’s continuing to create long-term deficits in Medicare and Medicaid. We’re not going to be able to afford a farm bill next time if half the country has diabetes or pre-diabetes because all our budgets will be spent taking care of people who are really sick.

We have a great farm bureau in Ohio that I have sat down [with its leaders] on issues like the algae bloom in Lake Erie, where they actually had to shut off the water from a Toledo facility for a weekend. The Ohio Farm Bureau was there from the beginning and asked, “how can we be a part of the solution?” Which is why I am optimistic about changing the food system. So I think just being honest and not hating on them, not blaming them is the key.

You mention Toledo. Des Moines, Iowa is having a similar issue with algae linked to farm runoff. Is throwing more conservation money at the problem going to solve it?

What we’ve done in Ohio is ask the U.S. Environmental Protection Agency (EPA) to act more aggressively and expeditiously for clean water protection. We’re talking to the National Oceanic and Atmospheric Administration (NOAA) about completing the Great Lakes algae bloom report so that we can further understand exactly what’s happening there. We want more U.S. Department of Agriculture conservation funds going to address these problems. Sometimes it does take more investments.

The problem really is that the farmers were doing what they were told to do by applying fertilizer. Better precision in application will help that. And we’ve continued to remove wetlands, which were the natural filter for a lot of this runoff. We need to go back and say these wetlands were here for a reason; they had a job to do.

Do you have some favorite farmers in your district?

Miller’s Farm is one of my local favorites. They do all grassfed meat, and use no antibiotics in their chickens. Generally we do soy and corn at pretty high levels, but we also have a good number of specialty producers. Ohio is kind of a prime place for trying to transform the food system and continuing to build out the specialty farms and sustainable farming.

How have you changed your eating habits since learning more about the food system?

The first story in the book is about how my brother busted me one night in a hotel room with chicken wings and ice cream. I eat a lot less chicken wings now than I used to and I try to have them baked instead of deep-fried. I pretty much cut out bread and pasta and growing up Italian that’s very hard. But my wife has a gluten allergy so we do spaghetti squash instead.

We buy lean meat and chicken without antibiotics. That’s one of my big concerns–how many antibiotics we’re ingesting now. We have one basic rule if you want to be bad, you’ve got to be good. So you try to be good 75-80 percent of the time and then if you’re in an Italian restaurant in Youngstown, Ohio you probably need to order some tiramisu and split it between everybody.

You remind your readers to be careful about blaming farmers because they’ve been put into a tough spot. Who’s responsible for our broken food system?

The original idea [of the Green Revolution] was pretty noble: how are we going to feed the world and use the bounty of the United States and its transport capacity to feed the world? Applying industrial methods to farming increased output, but it went too far considering half the food we’re growing doesn’t go right to the table because its fed to animals or processed first.

[Processed foods] are artificially cheap and affordable to average people in places like Youngstown and Akron, Ohio. Because there is also a high level of income inequality, people need to eat calories and they’re going to get them in the cheapest way they can. That’s why shifting subsidies to support healthy diets is critical.