A new report shows how rising heat in America's Heartland could wreak havoc in the decades to come. 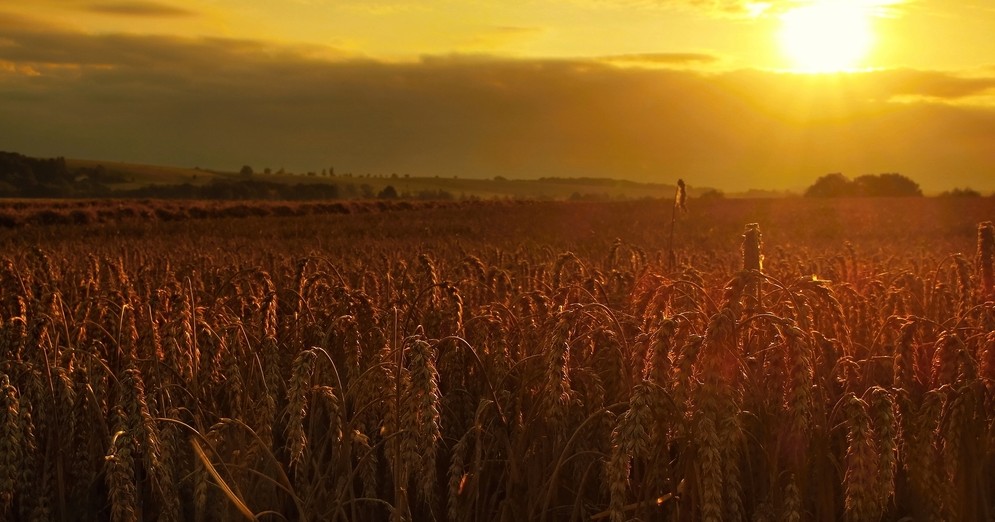 Devastating crop losses, over-heated cows, and major changes to farm infrastructure. According to a new report from the Risky Business Project, these are just a few of the problems that will arise in the coming decades as the climate warms.

In fact, rising heat triggered by greenhouse gas emissions could lower crop yields in parts of the Midwest as much as 90 percent by the end of the century, the report warns. With over half a million farms valued at $135 billion per year, commodity agriculture dominates the Midwest economy. The region produces 65 percent of the nation’s soybeans and corn and nearly as much of the wheat. But without significant adaptations for infrastructure and livestock housing, climate change could have devastating economic impacts on the agriculture industry.

Heat in the Heartland: Climate Change and Economic Risk in the Midwest is the first regional study from the Risky Business Project, which launched with a comprehensive national climate report last June. According to the data, the number of days with temperatures ranging above 95 degrees could double or triple in Midwestern states, rivaling Arizona’s heat records in the coming years. Missouri, Iowa, Illinois, and Indiana will be hit hardest. By end of century, Illinois alone could lose between $1.5 billion to $13 billion a year because of lowered yields for the three major commodity crops: corn, soybeans, and wheat.

At the same time, actual impact will vary depending on state, county, and crop. Corn, for example, is more susceptible to heat than wheat. That means major corn producing states like Missouri and Iowa, could be hit harder than Michigan to the north, where farmers could choose to practice methods such as double-cropping, or harvesting more than one crop in a single year, as warmer temperatures allow for longer growing seasons.

Increased heat and humidity will also impact livestock. Higher body temperatures in poultry and cows can disrupt their performance, production, and fertility and result in less meat, milk, or eggs, the report notes. Premature, heat-related animal deaths are another possible outcome, along with higher feed and water costs, and changed animal disease patterns.

One risk that hasn’t received as much attention, according to the report, is the impact of rising temperatures on the productivity of agricultural workers. Agriculture falls into the same “high-risk” category as construction, manufacturing, and transportation, where the work tends to take place outside. As heat rises, labor productivity, not surprisingly, falls. Some Midwest states could see a 3 percent decline in productivity by 2100, especially in agriculture, where workers are necessarily outdoors for a good part of the day.

The Risky Business Project is co-chaired by an unlikely bipartisan trio of wealthy investors: Michael Bloomberg, the billionaire former mayor of New York; Tom Steyer, a hedge fund manager turned environmental activist; and Henry Paulson, the retired Goldman Sachs executive and former U.S. Secretary of the Treasury, who was named by TIME magazine as one of 25 people to blame for the 2008 financial crisis.

The “Risk” committee includes Cargill’s executive chairman and four former U.S. cabinet members. Their goal is to shift the discussion on climate change from the domain of environmentalists to the front page of the business section by using risk assessment language and analysis techniques familiar to the business world.

The report urges the business community to resist complacency in the face of climate change. For some regions, looking the other way is no longer an option and the same will soon be true of the Midwest. In fact, the southeastern U.S. is already feeling the heat, says Kate Gordon, executive director at the Risky Business Project and lead author on Heat in the Heartland. “Those states are at the leading edge of heat-related impacts due to climate change, and we are seeing yield declines in commodity crops like cotton and soy,” she told Civil Eats.

These threats aren’t looming in the far off future, warns Gordon. Over next five to 25 years, Missouri is looking at a 25 percent crop decline; that number could jump from between 37 percent to 90 percent by the end of the century.

“We’d like to see the agricultural community and business leaders going beyond thinking about crop-level adaptations into thinking about where they are making the big investments,” Gordon says. “Where are they putting grain elevators? Where are they putting chicken farm facilities? How are they housing livestock? How do different animals respond to heat and humidity? We’d love to see them incorporating the Risky Business Project data into decisions about big infrastructure investments.”

“It should be part of the DNA of business and government when they are making investments in infrastructure, supply chains, and facilities, as well as where to spend vital government dollars,” Gordon adds.

The report stops short of suggesting policy pathways for public and private sector interests, though it does urge damage control for economic choices made decades ago. And while the report acknowledges that Midwest farmers can mitigate the impact of climate change through seed modification, double-cropping, and crop switching, it stops short of recommending organic or agroecological solutions, despite their proven environmental benefits.

“We didn’t go into those issues in the report since we focused only on past or traditional adaptation and did not model potential future adaptation or mitigation,” says Gordon.

At a talk to the Economic Club of Minnesota, where Heat in the Heartland debuted in January, Greg Page, executive chairman of Cargill and a vocal member of the “Risk” committee, told the audience that adaptation and resilience would be the key to weathering climate change for the Midwest agricultural industry. Farmers must be resilient and adaptive by nature, so it shouldn’t be much of a stretch to take the next logical steps to shore up against climate change, goes the argument.

The report’s conclusion buttresses Cargill’s assertion: “Armed with the right information, Midwest farmers can, and will, mitigate some of these impacts through double-cropping, seed modification, crop-switching, and other adaptive practices.” Other possibilities are energy audits for farms and agribusinesses, and nutrient management to optimize fertilizer use and reduce emissions.

Not everyone agrees. Jon Doggett, executive vice president of the National Corn Growers Association, told the New York Times that he was skeptical about how much the report will influence farmers, who have pressing immediate financial concerns and don’t have the luxury of thinking 15 years into the future.

But Kate Gordon says that the agricultural community in the Midwest has already begun doing this type of analysis on their own, especially as it relates to energy efficiency. Moreover, as leaders in the industry, they understand the very real economic risks of a changing climate, she says.

Ultimately, Gordon would like to see climate projection data integrated into all regional public and private sector decisions on where to invest in infrastructure, supply chains, and agricultural facilities. “[Risk assessment on climate] should be part of the DNA of business and government,” she adds.