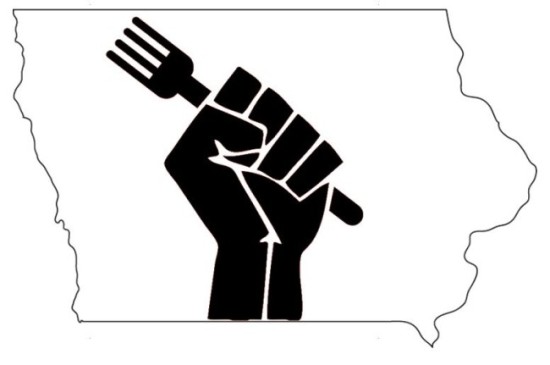 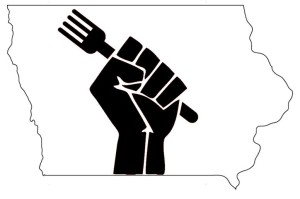 With its millions of acres of farmland, Iowa is a crucial part of our country’s food landscape. Almost a third of all pork sold in the United States is raised in Iowa, along with two billion bushels of corn, half a billion bushels of soybeans, and 13.8 billion eggs. The majority of this food isn’t produced by independent family farmers, but rather on large-scale commercial farms and in a growing number of concentrated animal feeding operations or CAFOs.

As a result, Iowa is rapidly becoming one of the most important food and farm battlegrounds in the country. So it’s not completely surprising that agriculture investor and lobbyist Bruce Rastetter is planning to bring a host of GOP presidential candidates together for the inaugural Iowa Agricultural Summit this weekend. Rastetter organized the event to “allow elected officials and public policy leaders to have a public discussion on issues that are vital to the Iowa and American economy.”

If you’re not familiar with Rastetter, the multi-millionaire is one of the most prominent agricultural figures in Iowa. As CEO of the Summit Group, Rastetter has invested in a number of agricultural industries, including production agriculture and renewable energy, and serves on the Iowa Board of Regents.

His company’s operations focus mostly on grain and meat production, but he also dabbles in alternative fuels like ethanol. More importantly, Rastetter has been described by many as a “GOP megadonor.” According to the Des Moines Register, Rastetter has contributed nearly $1.5 million into the coffers of GOP candidates.

Rastetter’s status as a “kingmaker” has been successful in attracting GOP candidates to Iowa, which is of course a crucial state for presidential hopefuls. Eleven potential contenders for the GOP nomination for the 2016 presidency–including frontrunners Marco Rubio, Scott Walker, and Jeb Bush–have confirmed that they will attend the event. Considering the importance of the Iowa Caucuses in presidential primaries, it’s no surprise that the candidates would be paying close attention to the issue that deeply concerns many caucusing Iowans–agriculture. (Here’s the Register‘s detailed list of the top issues Rastetter intends to cover.) 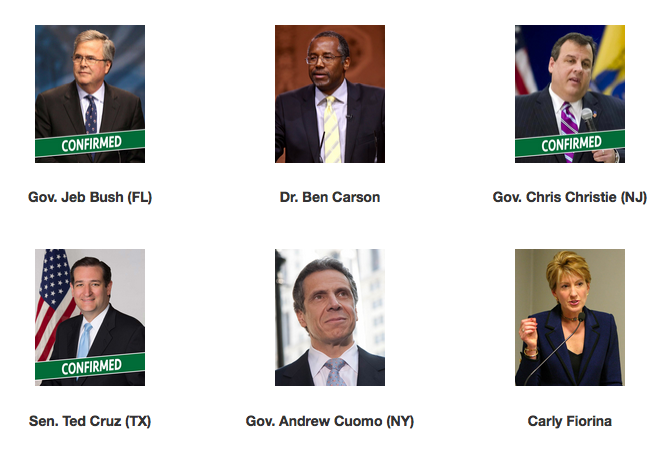 A screen shot from the Iowa Ag Summit website shows several of the confirmed GOP candidates.

The problem, says Hugh Espey, Executive Director of Iowa Citizens for Community Improvement (CCI), a grassroots advocacy group working on a range of progressive issues, is that the face of agriculture discussed at the summit only represents a portion of what’s happening in Iowa.

In the case of water pollution, for example, the situation in the state is dire. Agricultural waste has caused dangerously high levels of nitrates in two of Iowa’s major water sources. “We have 3 million people in Iowa and 21 million pigs,” says Espey. “Those pigs produce waste that is equivalent to 50 million people. All of that manure is applied to the land and it ends up in our rivers and streams. We’re literally drowning in manure.”

Nitrate pollution has gotten so bad in these rivers that Des Moines Water Works, the utility that provides water to more than 500,000 Iowans, is suing three counties in Northwest Iowa for failing to maintain agricultural runoff ditches, where waste is disposed of before it can reach the state’s water supply.

“They’re talking about what they can do to make more money off of farming and food production, and that’s more pesticides, more genetically modified organisms, and bigger equipment that is designed to take jobs away from people who work on farms in Iowa,” says Espey. So when the Iowa Ag Summit was announced, Espey knew that his group had to take action.

As a result, CCI and a coalition of other organizations and sponsors, including Farm Aid and the Land Stewardship Project, have planned a counter-summit in protest to the Iowa Ag Summit. Called the Food and Ag Justice Summit, the event will focus on presenting an alternative approach to agriculture.

On the first day of the Iowa Ag Summit, CCI activists will line up at the doors and distribute their vision for food and agriculture justice to the event’s attendees. Saturday’s protest will also potentially involve some direct action inside the walls of the Iowa Ag Summit. “We have members who have tickets and what happens there is yet to be determined,” says Espey.

That afternoon, protesters will gather for a teach-in on the Iowa State Fairgrounds, featuring some of the country’s most prominent agriculture and environmental justice speakers. Farm Aid’s Advocacy & Issues Director Alicia Harvey, The Oakland Institute’s Anurhada Mittal, and Patty Lovera of Food & Water Watch will all speak on issues ranging from farmworker protection to ecological farming practices.

Mittal first engaged with Rastetter’s vision for corporate agriculture in a land deal in Tanzania. “We have been looking at this trend in foreign land investment deals in Africa that are promoted as a way to bring food security, infrastructure, and jobs,” says Mittal. “One of the deals involved Bruce Rastetter as the CEO of a company called AgriSol. When we looked at the deal, we saw that his company was asking Tanzania to make changes in their regulations on GMOs and take out a World Bank loan.” Mittal says that Rastetter’s company was looking to pay less than twenty cents per acre for an 800,000-acre expanse of farmland.

An Oakland Institute exposé of AgriSol’s investment in Tanzania ultimately led to the deal falling through, but Mittal notes that this is the same type of plan that Rastetter and his corporate ag partners have planned for states like Iowa.

“The Iowa Ag Summit is about their vision for world agriculture, and we find it to be very dangerous,” says Mittal.

Farmer and small farm advocate George Naylor, who will speak at the counter-event, believes there’s a growing interest in small-scale farming models, even in the heart of a state that has long been dominated by large commodity production.

“There’s a community of farmers, especially young farmers, trying to raise products in an alternative way, and market them locally. And a lot of towns now have farmers’ markets, which didn’t just a few years ago,” he says, also pointing to the Practical Farmers of Iowa, which has a sizable following and convenes a large annual convention of sustainable producers in the state.

“The organizers of the event want us to believe that agribusiness is doing us a favor by creating cheap food and we just have to accept the fact that our land is being destroyed, our water is being polluted, and family farmers are being replaced,” he says.

CCI hasn’t invited the candidates to their event, but Espey says, “We’re going to take our message to these candidates in another setting because they need to hear about what it’s going to take to make a better food production system a reality.”

“Some say that with events like this we’re preaching to the choir,” Naylor adds. “But I think we have to recognize the the choir is a lot bigger than it used to be, and a lot smarter.”