Seeding the Demand for Ancient Grains

Eastern Washington is commodity wheat country; over 2 million acres of the grain grow in the state each year. Although researchers and farmers continue to explore alternative crops, today’s soft white wheat is remarkably easy and cheap to grow in this arid region.

Over a decade ago, however, two small Washington farms began embracing diverse varieties of wheat, growing hulled ancestors including spelt, emmer, and einkorn, collectively called farro. It’s often difficult to create demand for an unfamiliar crop—and these two farms took different, yet equally successful, approaches. One farm primarily connected with Seattle-based chefs, the other focused on reaching consumers at farmers’ markets and health food stores. The net effect has been a surging local demand for these ancient grains.

And the ancient grain craze shows no signs of slowing down. Named a top food trend by the National Restaurant Association in its “What’s Hot in 2015” report, ancient wheat varieties are an important part of the grain movement.

Last year, demand for spelt grew 360 percent, while demand for farro grew 39 percent. Consumer skepticism about gluten and a rise in gluten-free products—up 63 percent from 2012-2014—has also prompted some consumers to look critically at modern wheat varieties, which were bred to be much higher in gluten than ancestral varieties.

In 1999, Lena Lentz Hardt grew her last commodity wheat crop in eastern Washington. Instead of the varieties bred for maximum production, she wanted to grow wheat’s more nutritious ancestors for the specialty grain market at her farming operation, Lentz Spelt Farms.

Hardt and her partner René Featherstone connected with a Montana State University (MSU) professor exploring farro varieties he obtained from the U.S. Department of Agriculture (USDA) Small Grain Germplasm Research Facility, a seedbank located in Aberdeen, Idaho. They adopted varieties of MSU-released spelt and emmer and secured some of the few einkorn seeds available after that project was dropped.

The Lentz farm is 240 acres, and they contract with several organic growers to raise the emmer, einkorn, and additional spelt. At the time, though, it was a bit of a gamble. “Nobody in eastern Washington even knew what spelt was back then,” Hardt says. 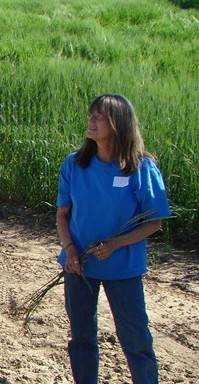 She recalls explaining spelt, emmer, and einkorn hundreds of times at local farmers’ markets, while Featherstone gave talks at health food stores. They sell much of their spelt to Bob’s Red Mill, a Portland, Oregon-based specialty grain mill and retailer, their emmer is sold at local retailers including Whole Foods as well as the Seattle-based Tallgrass Bakery. All of their farro, including einkorn, is available through the Seattle-based online retailer chefshop.com.

Bluebird Grain Farms, a central Washington-based organic grower of emmer and einkorn, took a different tact—reaching out directly to chefs and bakers in Seattle and Portland. “What I love about farro is its versatility,” says Brooke Lucy, who, along with her husband Sam, runs the farm in the Okanagan Valley. “It can be cooked as a rice, hot cereal, polenta or ground into a flour for cakes, bread or pasta; it feels like a staple grain, but it has an amazing sweet, nutty flavor.”

Brooke Lucy had encountered farro as an exchange student in northern Italy. Twenty years later when she started to farm, she realized that Italy supplied all the farro in the U.S. Providing a local, domestic source was an enticing option. The Lucys grew 20 acres and shared it in the local community first and people liked it. Soon, they set up a mill to make their own flour. “It was helpful to show people all the options.”  Now they grow emmer and einkorn on their 280–acre farm.

“For the first few years, it was local chefs who bought our products, excited to get a local source of farro,” says Lucy. At an area chef’s collaborative, they met John Sundstrom, owner of Seattle’s Lark restaurant. Sundstrom says the Bluebird farro cooked up better than imported varieties, which were pearled—or had the husks removed in a way that removes nutrients. While he has used it as a polenta and in Lark’s housemade bread, it has been most popular in a risotto-like signature dish that features seasonal toppings—everything from asparagus in the spring to chanterelles in the fall.

“We’ve kept it on the menu because people love it, they would be mad if we took it off,” he says. 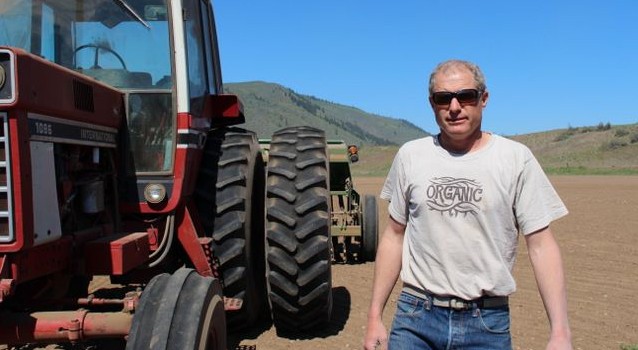 Leslie Mackie, founder of Macrina Bakery in Seattle, doesn’t know whether her customers understand the nutritional value of ancient grains, but they are intrigued by anything unique and interesting—and grown locally. She uses is in Meze salads in her cafe and hopes to incorporate it into future breads.

Arguably some of the demand has come from gluten-sensitive consumers looking for baked goods that have a different gluten profile than modern wheat. Emmer and einkorn still contain gluten, but they are considered more digestible—at least for non-celiac individuals.

“The gluten-free thing has definitely helped sales, but I wouldn’t say that is what helped it take off,” says Lucy. Rather, she thinks a growing interest in food and food systems is piquing an interest in simpler, genetically pure foods. “I feel like the GMO issue has gotten people revved up about looking at what they are eating and caring about what they’re putting in to their bodies. Gluten is part of that,” says Lucy.

Although genetically engineered wheat hasn’t been approved for the U.S. commercial market, it was found in Oregon in 2013, prompting a $2.4 million lawsuit.

Featherstone estimates that 3,000 to 4,000 acres of farro, spread out over Washington, Idaho, and Montana, are grown each year to satisfy the direct market demand in the Pacific Northwest—still, it’s a drop in the bucket compared to the amount of land devoted to modern wheat varieties, he says.

Although Hardt says it can be a challenge to find farmers to help them grow ancient varieties, mainly because they are competing with frozen vegetable companies who will harvest the crop for the grower and pay in advance. However, she adds, “We’ve been able to keep up with local demand.” Hardt says she’s happy helping to satisfy the market in the Pacific Northwest, and expects more farmers around the country to start growing farro soon. Indeed, field trials of emmer and einkorn varieties have taken place in North Dakota and Vermont in recent years.

Meanwhile, Bluebird Grains hopes to convince neighboring farms to start growing emmer and einkorn as well. “It’s a challenge to get people to think about other options,” she adds, especially when they haven’t grown organically. “That’s our next big step is working with other farmers to grow crops with us to build our business to a larger scale.”