A coalition of breeders, farmers, and chefs are saving us from a bland future by seeding a new wave of vegetables bred for flavor. 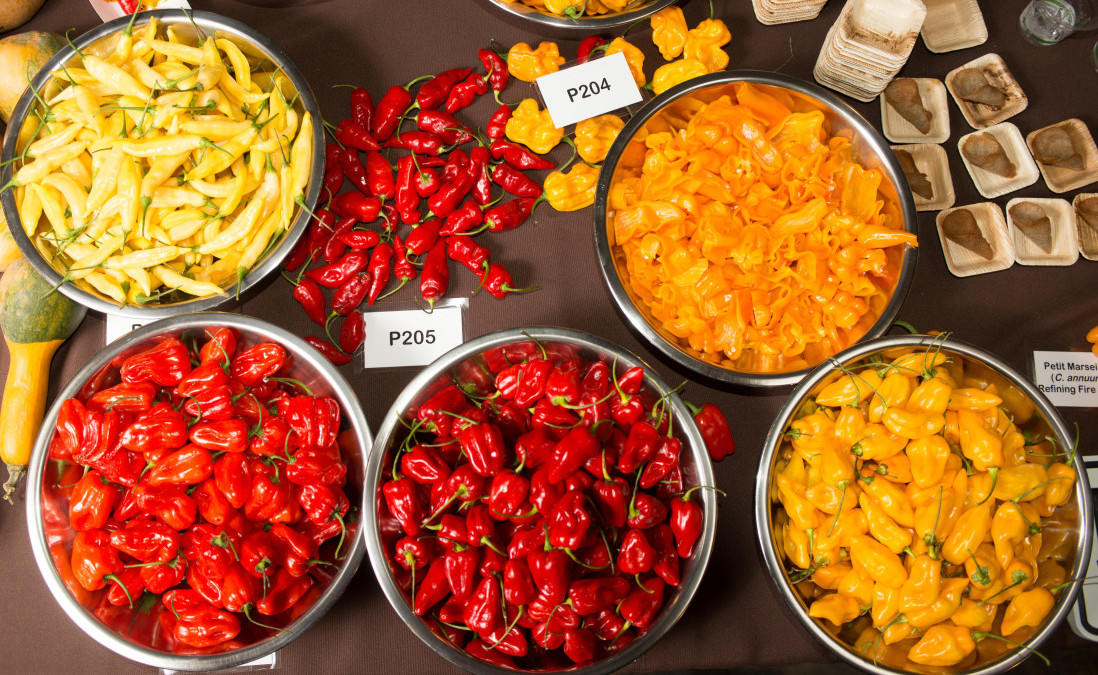 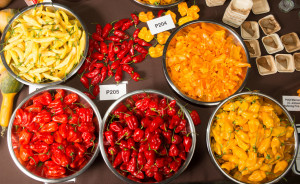 Last fall, the Culinary Breeding Network organized the first-ever Variety Showcase in Portland, Oregon, an event that brought together plant breeders, seed growers, farmers, produce buyers, culinary educators, and some of the city’s best chefs to taste and evaluate the most exciting new open-pollinated vegetable crops being grown in the Pacific Northwest. It’s tempting to dismiss a bunch of chefs swooning over exotic carrots as a farm to table cliché, but the event refocused attention on the most fundamental aspect of farming and cuisine: the seed.

Few farms save their own seeds. Most rely on a few major seed companies that control the majority of seed production in North America. Historically, the development of new seed varieties was a core public service offered by land-grant universities with strong ties to local communities.

These almost exclusively public universities (Cornell and MIT are the only private land-grant universities) have played a pivotal role in the development of food resources in the United States. Land-grant institutions are responsible for addressing critical technical agricultural concerns like disease and pest resistance, crop development, drought tolerance, and soil and mineral research. They operate experiment stations and extension programs that work with communities to develop new plant varieties and solve issues related to food production. They even run nutrition education and food business development programs.

These services are vital, but the focus is beginning to shift. Land-grant universities are facing declining federal funding, and retiring seed breeders aren’t being replaced. Today, the major decision makers about what we grow to eat are no longer taxpayer-funded researchers or regional farmers; they’re national agribusiness companies. These firms value just four major attributes when they develop or purchase new genetic lines: yield, storage, shipability, and uniformity. 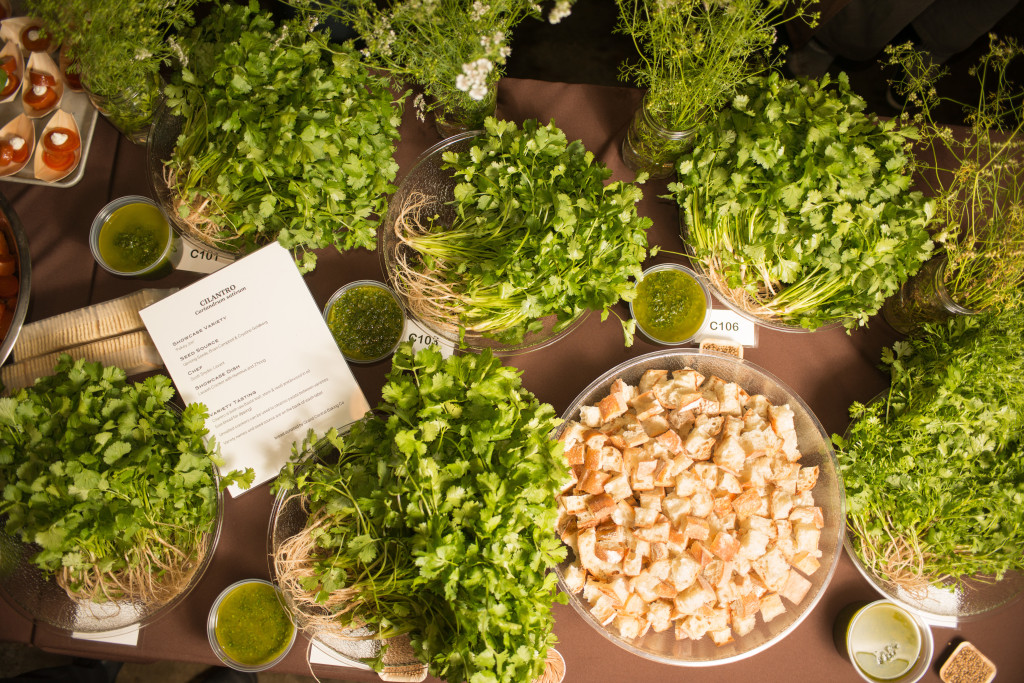 Achievement in these categories has resulted in our current landscape of food that is attractive, firm, uniform, predictable, and available year round. It has made national-scale commodity cropping faster, easier, and more profitable. But it may also leave us more vulnerable to disease, pests, and climate change through an emphasis on monocropping and a relatively limited pool of genetic material, and it has sacrificed both nutrition and flavor. This transfer of control has taken place almost completely under the radar, but you can taste it every time you bite into a smooth, firm, cherry-red, totally flavorless tomato in April.

Fortunately, all is not lost. The Variety Showcase made it clear that plant breeding for other attributes is still alive and well in the United States. At Oregon State University (OSU), Oregon’s only land-grant university, Jim Myers is quietly pursuing some of the most exciting vegetable breeding projects on the West Coast.

Myers is the chair of vegetable breeding and genetics at OSU’s Department of Horticulture, and the chief architect behind the open-pollinated Indigo Rose tomato. The product of a cross between cultivated tomatoes and wild lines from the Galapagos and Central America, the Indigo line is unmistakable thanks to its vivid purple color. But when you ask Myers about it, he’s quick to give credit to his collaborators. “Starting was not my idea at all. It was Carl Jones, a graduate student, who took us down this path. It’s a matter of recruiting a smart graduate student and turning him loose.”

The Indigo project was started with the intention of making tomatoes—by some estimates the second-most frequently consumed vegetable in the nation—more nutritious. Myers recounts how Jones “noticed that there were some tomatoes in the genetic stock collection maintained at UC Davis with a purple color at about the same time people recognized anthocyanins as a nutrition pigment. Our first paper got a fair amount of press, but the results were disappointing because expression wasn’t very high in initial attempts. But one combination of strains did produce an intensification of the pigment, which eventually became Indigo Rose.”

Because Indigo Rose is an open-pollinated tomato, its genetic material is available for anybody to grow, breed, and experiment with. Myers brought eight different cultivars in progress to the Variety Showcase, including some bright-green salad slicers with bracing flavor and acidity as well as a whole new breeding line of Roma types.

“It’s not just about finding the next novelty or the next big thing,” said Andrew Still, owner of Adaptive Seeds in Sweet Home, Oregon. “We’re here to bring biodiversity back to agriculture and our plates as soon as possible.” Open-pollinated plants and seed breeding have the potential to shape the future of our food system in a profound way by helping growers adapt gracefully to changes in our economy and climate while improving the flavor and nutrition of the foods we all eat. 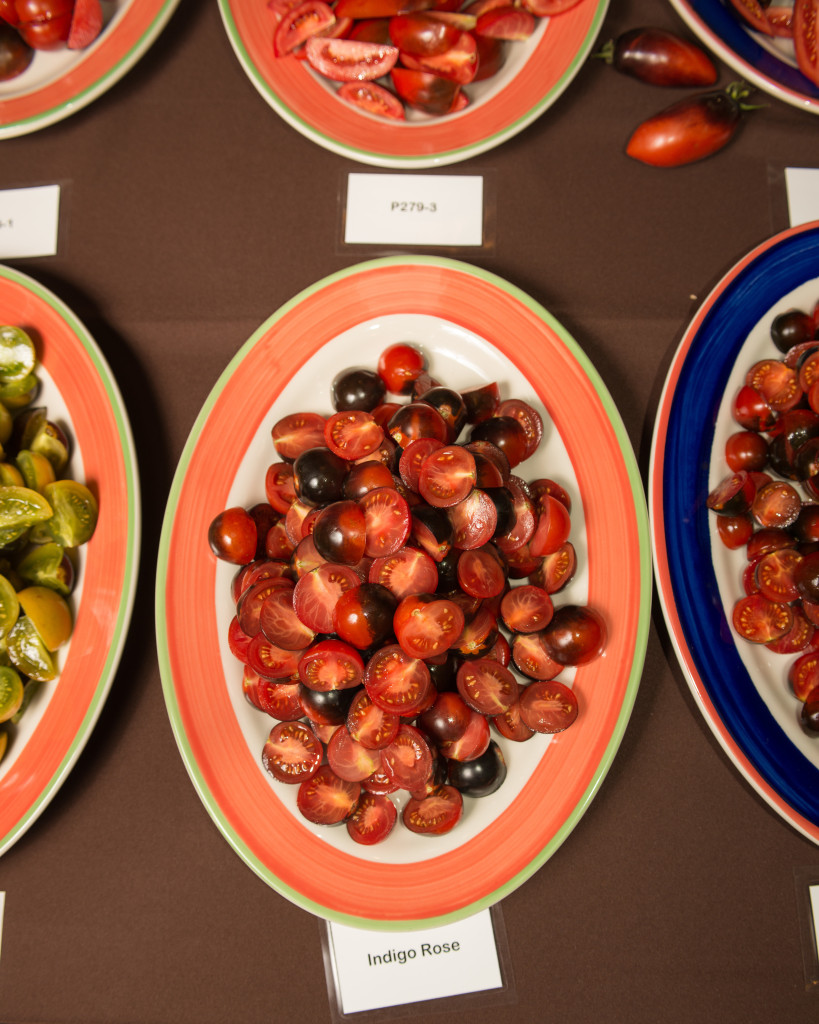 The New Face of Plant Breeding

Myers is continuing his experiments with the Indigo line, including recent crosses with French indeterminate heirlooms like Ananas Noir. But despite its successes, Indigo isn’t a direct product of the land-grant system. Instead, Myers funded it from his own endowment budget. “The land-grant program is still there in name and as an institute, but funding has dwindled. When I came to OSU fifteen years ago, every breeding project got $15,000. Now I don’t see any funding of this sort.”

Support for the land-grant program comes from a complex web of federal funding sources. Priorities are set at broad levels, and often with lots of input from big players in the agribusiness sector. To encourage public-sector breeders like Myers to focus on priorities like taste and nutrition, we need alternative venues like the Culinary Breeding Network to create, test, and promote new vegetables at the consumer level and draw attention to the reality that seed breeding is the true blueprint for our entire food system.

Lane Selman, director of the Culinary Breeding Network, is a faculty research assistant at OSU who works closely with Myers. Much of her work takes place in the field with seed trials, in which farmers across several different test areas grow new crop varieties to select the most promising new lines for organic growers. Instead of the metrics used by big agribusiness, Selman evaluates plants based on vigor, flavor, texture, culinary attributes, and nutrition. Growers and researchers taste crops right in the field, taking a bite out of a carrot or pulling a few tomatoes from the vine. Seed trials like these are able to create some amazing new varieties, but Selman sensed that there was a missing piece.

The Culinary Breeding Network arose from the desire to involve all the stakeholders in a local food supply chain in the breeding process. So far, it’s a loose, inclusive, highly regional group of breeders, farmers, chefs, produce buyers, grocers, and other food economy players in the Northwest—around 100 active participants in all but with a reach that extends far beyond its immediate network. The group is writing a grant proposal to extend the network to Wisconsin and New York (in partnership with land-grant universities Cornell and University of Wisconsin). By extending the decentralized ethos of open-pollinated breeding to the entire agricultural economy, from breeders and farmers to chefs and buyers, the Culinary Breeding Network hopes to cultivate a more delicious, more resilient, and more regionally adapted food system while supporting plant breeders like Myers who breed for taste and nutrition, not ease of distribution.

Today, open-pollinated plant breeding takes place in a fractured system populated by a lot of passionate, knowledgeable, enthusiastic, and immensely overworked people who don’t always talk to one another, or to the people who can help get their work to market, like farmers, distributors, and chefs. Breeders make choices in the field that dictate what will be available to sell to consumers. Farmers grow our food, but they’re usually too busy to market nontraditional crops or too financially strapped to take a risk on growing something without a proven market. Chefs don’t just set trends; they educate consumers about unfamiliar foods and force distributors to carry new products. Coordination between these different stakeholders is what transforms something like a Padron pepper from a novelty to a profit center for farms.

What stood out most from the Variety Showcase was the almost-too-good-to-be-true reality that we don’t have to compromise when it comes to breeding vegetables that work for us. Jim Myers’s technicolor Indigo-line tomatoes don’t just stand out on a salad plate, they also contain dramatically higher concentrations of antioxidant anthocyanins, making them more nutritious than regular tomatoes.

Land-grant university work like this directly serves the public interest. Without it, our seed supply will be developed to meet those four enterprise goals of yield, storage, shipability, and uniformity. But the Culinary Breeding Network opens a tantalizing window to another way, an inclusive system that connects the entire eating community through the shared goals of collaboration and building a more vibrant—and delectable—culinary landscape.

Margarett Waterbury is a writer who lives in Portland, Oregon, and is a lifelong resident of the Pacific Northwest. She is interested in all aspects of food, from cooking and eating to the systems and industries that produce it. Her journalism has been published in Culinate, Portland Monthly, Edible Portland, and The Inquisitive Eater. She also writes for businesses and private clients. Read more >