Ballard Bee Company is Bringing Pollinators Back to Washington State 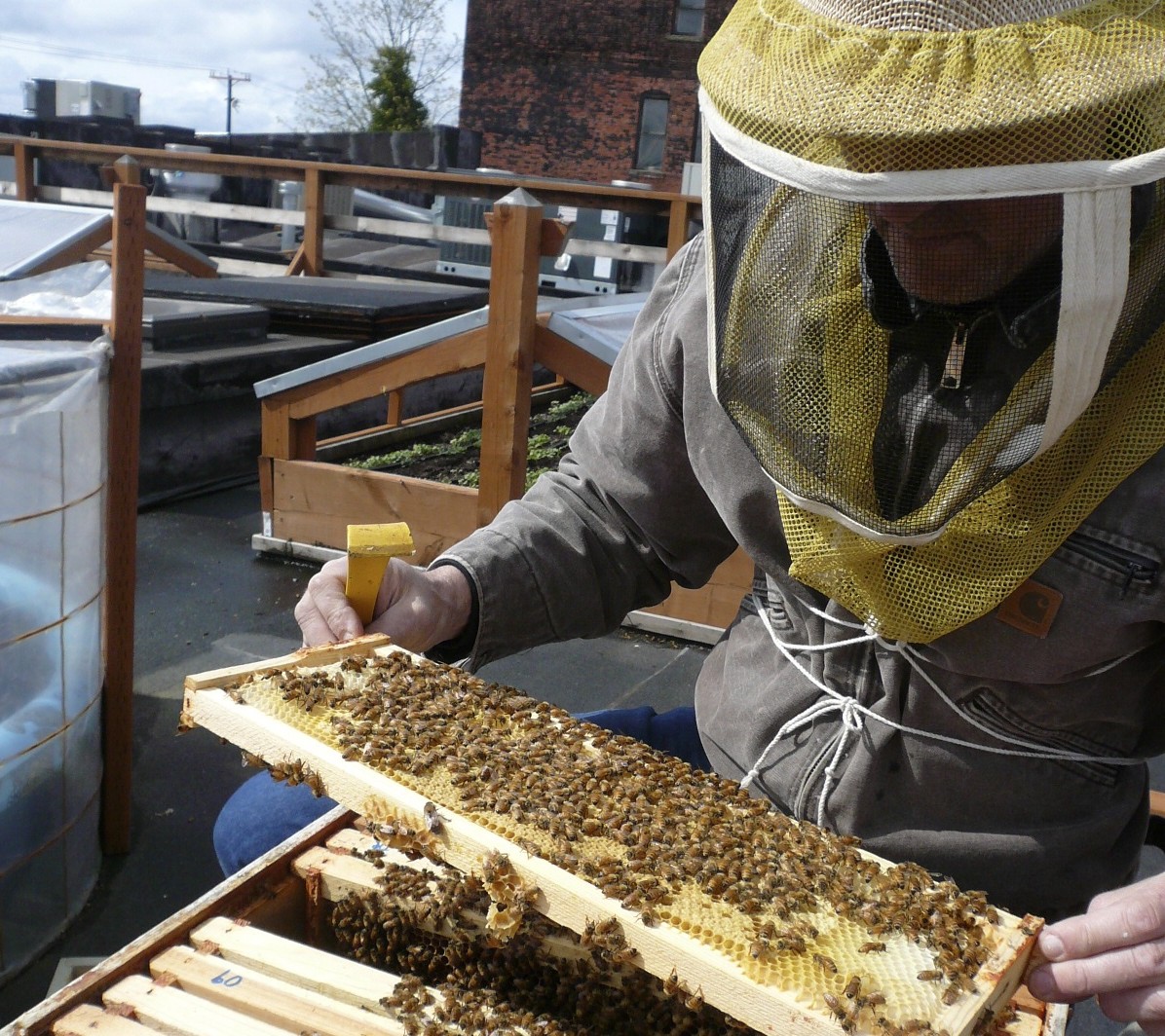 Have you considered putting in a beehive, but worried that you might not have the time to maintain it? If you live in Seattle, you’re in luck. Once a month, Corky Luster’s Ballard Bee Company will install a hive, care for the bees, and harvest the honey for you.

“It’s like having a lawn service, but with bees. You can sit back and enjoy the bees, and we will take care of them,” Luster explains.

Ballard Bee customers sign up for a year of “urban pollination” services at a time. During the 6-month honey season, they receive two 12-ounce jars of honey a month, and in winter, Luster makes sure the hive survives.

In the process, he is turning suburban backyards and city rooftops into honey producing habitats, in hopes that it will help his customers connect the dots between what they eat and the natural world around them. “By [giving people] bees, you bring them into the fold, and they become part of the food system,” Luster says.

To make his business sustainable, Luster does more than manage hives. He teaches classes, consults with chefs, and sells honey and beekeeping supplies. “We’ve had a huge interest in beekeeping in Seattle,” he explains. His classes sell out and many of his graduates move on to their own beekeeping adventures.

Luster also consults for some of Seattle’s finest chefs. He helped both Jason Stoneburner of Bastille Café & Bar in Ballard and Gavin Stephenson of Seattle’s Fairmont Olympic Hotel set up rooftop apiaries. “My goal was to educate the chefs and get them involved,” says Luster. “Both are really bright and very interested in trying to be part of the solution.”

The restaurant apiaries have succeeded. Chef Stephenson now manages five rooftop hives that house half a million honeybees. He harvested more than 400 pounds of honey last summer. Last year, after relying on the service of Ballard Bees for three years, Chef Stoneburner has taken over caring for his hives. He uses his honey in desserts, vinaigrettes, and in a popular cocktail called the Bee’s Knees.

In 2014, Luster started a new service for restaurants called the apiary partnership program. He invited restaurants and chefs to buy bee hives that he manages for a small fee. The restaurant gets 100 percent of the honey. According to Luster, the partnership is a great success and he plans to expand this program in the future. His clients include the Walrus and the Carpenter, an oyster bar in Seattle, Vif, a wine and coffee café in Seattle, and the Tom Douglas Restaurants.

Nearly half of Ballard Bee’s income comes from honey sales. The company owns an additional 130 hives that are housed 45 minutes outside of Seattle at Local Roots Farm and at Camp Korey. The honey produced by those hives has varied flavors that depend on where the bees are foraging. The first nectar flow begins early in the spring when the bees are feeding on pollen from the flowers of bigleaf maple trees, the largest species of maple found in the Puget sound area. Next the bees feed on pollen from blackberry bush flowers. The last flow is from the Japanese knotweed plant and has a fig and caramel taste to it. Called Dark Cream Honey, it’s Ballard’s favorite flavor and recently received national recognition as a 2015 Good Food Awards winner.

Education is important to the Ballard Bee Company’s mission. Luster’s goals when starting the business in 2009 were to teach people about bees, replenish the local bee population, and encourage new beekeepers. He is dedicated to spreading the word about the value of bees and says people are afraid of bees because they don’t know enough about them. When he works with a hive, onlookers express surprise that he is dressed in short sleeves without gloves. “People are amazed that honey bees are extremely gentle. They’re teddy bears,” he says. Some of his clients put lawn chairs near the hive so they can relax and watch the bees at work.

As pollinators of fruit trees, nut trees and crops, the value of bees is vast. According to the Washington State Department of Agriculture, honey bees pollinate $2.2 billion worth of tree fruits, nuts, and berries, and produce 2.5 million pounds of honey in their state alone. Those calculations do not include the value of all the seed crops bees pollinate, such as onions, watermelon, and squash.

Seattle, with its vibrant local food scene, is an ideal place to launch an urban bee company. Since Luster started his business, other bee companies have debuted, offering hosting, consulting, and education services. One business, called the Urban Bee Company, gives city dwellers a chance to sponsor a hive or an apprentice beekeeper along with hosting and education programs. “I could not be here without the support Seattle has given me,” Luster says. “I am really thankful for that.”