Will This Lawsuit Curb Extreme Air Pollution From Factory Farms?

Environmental groups are asking the EPA to step up regulations. 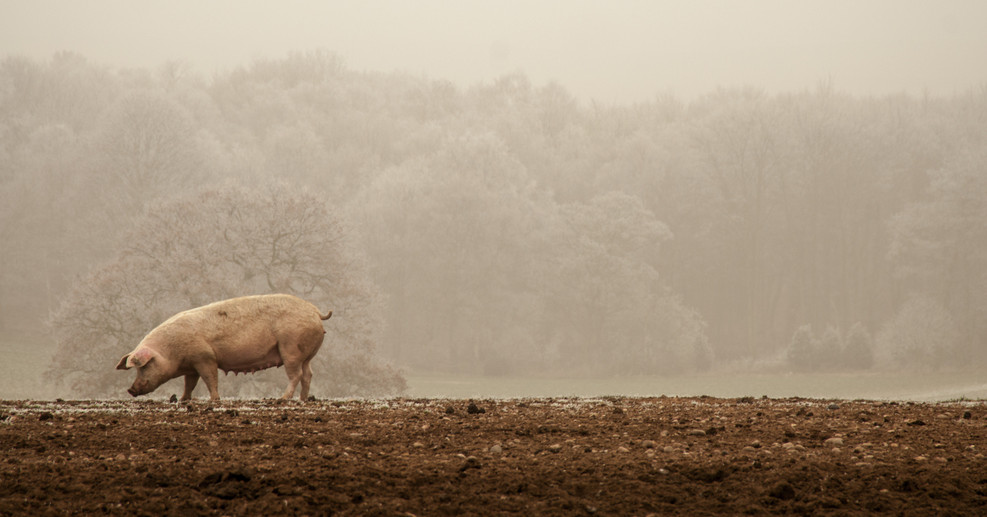 There are about 20,000 factory farms in the United States and together they produce more than 500 million tons—or 1 trillion pounds—of manure. These farms, also called concentrated animal feeding operations (CAFOs), altogether house billions of chickens, dairy cows, hogs, and other livestock. The waste from these animals adds up to more than three times the raw sewage produced by people in the U.S. and it emits significant amounts of harmful air pollutants [PDF] that include ammonia, methane, hydrogen sulfide, particulate matter, and volatile organic compounds (VOCs).

“I’m certain it’s affecting our health,” said Rosie Partridge, an Iowa farmer and member of Iowa Citizens for Community Improvement, who describes a “choking smell of hydrogen sulfide and ammonia” emanating from the industrial hog farm that moved in across the road.

Partridge is one of many rural residents and farmers who say their health and quality of life are being adversely affected by these farms. Now, a coalition of environmental groups that includes the Environmental Integrity Project, Friends of the Earth, the Humane Society of the United States, Center for Food Safety, and the Sierra Club, has stepped in on their behalf.

As the groups (and the Congressional Research Service) explain, the U.S. Environmental Protection Agency (EPA) does not comprehensively regulate the air pollution coming from large livestock operations. But that’s what the groups are asking the EPA to do in two lawsuits filed Wednesday in federal court in Washington, DC.

“It’s hard to know why these emissions that are known to be harmful are not regulated,” said Partridge on a call with reporters the day the suit was filed.

These pollutants have numerous impacts. They are associated with potentially dangerous acute and chronic health effects, among them respiratory illness—including asthma and bronchitis, headaches, eye irritation, cardiac symptoms, nausea, and neuro-psychological disorders. There’s also evidence suggesting that the smell emitted by some CAFOs might raise the blood pressure levels of nearby residents.

Factory farms also contribute to the formation of harmful ozone, smog and acid rain, and are major source of greenhouse gasses. (Agricultural sources—responsible for about a third of U.S. methane emissions—are absent from the Obama administration’s recent proposal to curb this pollutant). When the airborne nitrogen in these compounds lands on waterways, it leads to the algae blooms and “dead zones” that now plague the Chesapeake Bay, the Gulf of Mexico, and other marine environments.

“There’s no justification for treating CAFOs any differently than any other type of polluting factory,” said Friends of the Earth senior program manager Kari Hamerschlag.

The lawsuits specifically ask the EPA to respond to two petitions the groups filed in 2009 and 2011, to which the agency has not responded. The 2009 petition asked that the EPA regulate CAFOs as a source of air pollution [PDF] under the Clean Air Act, while the 2011 petition asked the EPA to regulate CAFOs’ ammonia emissions [PDF]. Now, the plaintiffs are asking for a response to these petitions within 90 days.

Keeve Nachman, director of the Johns Hopkins Bloomberg School of Public Health Food Production and Public Health Program, calls this “a serious regulatory gap.” CAFOs, Nachman said, are “breeding grounds for bacterial and viral compounds.” These “pathogens and contaminants,” he explained, “can be mobilized by winds or fans on confinement structures, potentially exposing community residents.”

Texas Tech University Researchers documented these effects—which include aerial movement of antibiotics used on livestock—in a recent study. Such pollution, said Nachman, can also increase community risk for antibiotic-resistant infections when they travel with particulate matter.

Scott Edwards, co-director of Food and Water Watch’s Food & Water Justice Project, points out that not only does the EPA not regulate CAFOs as industrial air polluters, but EPA also lacks “baseline data” about these operations. The EPA does not have a full catalogue of U.S. CAFOs, so the agency “can’t even tell you where they are,” said Edwards, nor does it know how much pollution these operations emit.

On Wednesday, a federal judge dismissed a suit brought by the American Farm Bureau and National Pork Producers Council seeking to block the EPA from releasing information about the location, size, and ownership of factory farms requested under the Freedom of Information Act by some of these same groups. The timing is coincidental, but the recent lawsuit underscores how “under-regulated” these facilities are, said Edwards.

The petitions filed against EPA Wednesday “are supplemented with more than 60 reports and studies regarding impacts of air emissions from this industry,” said Heinzen. “They show the imperative need to regulate these emissions. We’re prepared to make that argument,” she said.

The EPA says it is reviewing and will respond to the lawsuits. The American Farm Bureau Federation declined to comment on the suits, and livestock industry groups contacted by Civil Eats did not respond.