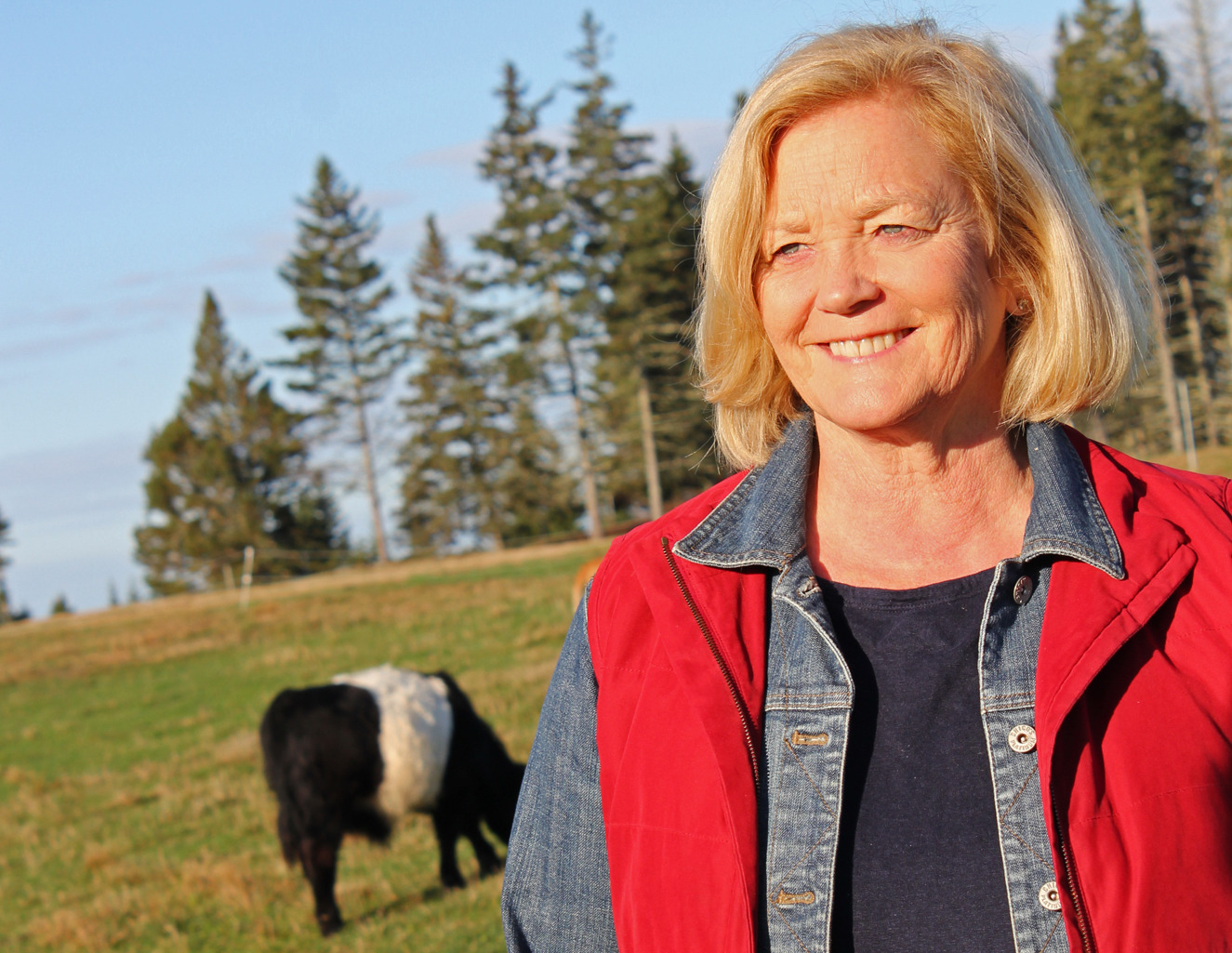 Chellie Pingree is not your average member of Congress. Before joining the U.S. House of Representatives in 2009, she had a long career as a state lawmaker in Maine. But before that, she spent more than a decade managing a yarn business using wool spun from sheep she had raised herself. The business boomed, and soon yarn stores and catalogs across the country were carrying Pingree’s products. And she did all of that after starting an organic farm on North Haven, a tiny island off the coast of Maine, when she was barely out of her teens.

Pingree’s long history in sustainable farming, from growing vegetables and raising sheep to serving on Maine’s senate agriculture committee, make her a powerful and unique voice in the halls of Congress. She has served on the House Agriculture Committee, and now sits on the Agriculture Appropriations Subcommittee, a position where she is working to send resources to sustainable and up-and-coming farmers. While she stays busy in Washington, Pingree hasn’t forgotten her roots. She and her husband still manage an organic farm on North Haven, which boasts a wide array of crops, several breeds of livestock, and a small organic creamery.

We spoke with Pingree about her path from the field to the Hill and back, and about how consumers can help Congress to change our food system.

I came from a family of Scandinavian immigrants who came to the Midwest to be farmers. I grew up thinking, “I’m never going to learn how to farm.” But, I ended up meeting a boy and coming to the East Coast. Everybody at the time was reading Helen and Scott Nearing’s book Living the Good Life, which is all about sustainable farming, and the Nearings were here in Maine. I immediately got into the politics and lifestyle of sustainable farming.

I got involved working with the Maine Organic Farmers and Gardeners Association and trying to start my own growing operation with very little skills. I went to College of the Atlantic; Eliot Coleman was teaching there and I focused on organic farming. I was so fortunate to learn from him because he had been a protege of the Nearings, and he taught me an enormous amount. [Organic] wasn’t considered an economically viable way to farm and there weren’t a lot of ways to learn about it. Everyone sort of treated you like a hippie, back-to-the-lander. It was very divisive between the conventional farmers and the organic farmers.

How have things changed since you began farming in the 1970s?

Twenty years ago, when I got elected to the Maine legislature and I sat on the agriculture committee in my first term, [organic] was considered this fringe idea. Fast forward and now practically every land grant college has a sustainable agriculture program. It’s a growing economic market, which has provided huge opportunities in a state like mine, where dairy farmers who were going out of business now have competition if they want to sell organic milk. I go to meetings today with dairy farmers to talk policy and I can’t tell who in the room is the conventional farmer and who is the organic farmer.

We still have a food system in great need of change. It’s highly dependent on moving food around the country and shipping it for 7-10 days before it gets to the consumers. We have concerns about what’s in our food, all the pesticides and herbicides. Plus, there’s extreme vertical integration of the food system. I don’t want to pretend that that has changed or that there isn’t a significant lobby to keep it exactly the same. But, from my observation, that was there 40 years ago, too. [But] there wasn’t an opposition voice, and the consumer wasn’t asking for anything different. Forty years ago, consumers were saying, “Oh wow, this modern processed food that comes in a box, I should feed my family that—it will be so easy. Who cares about the ingredients?”

Today, the consumer is exercising their opinion at all economic levels. The reason Walmart is moving into organic food is because they see this isn’t an elitist food issue. It’s all across the board. My office saw a statistic that nine out of ten parents who feed their children baby food choose organic. That’s all across the economic spectrum.

The biggest challenge is public policy, which often lags behind reality. Working in the political spectrum, even trying to make minor changes in the Farm Bill is a big fight. Even though there’s significant change going on in the country, big corporations who have always done it a certain way will fight that change. But some of it is happening in spite of them, and some of it is happening in the marketplace. They follow the sales, and that’s been very helpful in creating change.

What do you think is the role of grassroots communities in changing the food system? Policy makers?

In all the years I’ve had the opportunity to work in the political process, I’ve always believed that you can never make change if you don’t have a significant outward movement pushing for that change at the same time. It doesn’t matter if it’s health care policy or economic justice or environmental issues—you have to have a grassroots force that’s also moving for that change. Some of that’s happening with the market, but some of that’s happening with individuals who send emails to my office and say, “We want GMO labeling. We want more opportunities for healthy food under SNAP benefits.” Everything that people do that pushes both on someone like me, so that I can validate [the issue], but also on many of my colleagues [for whom] this may not be their primary issue or who are being heavily lobbied by a food processing corporation. If [lawmakers] hear from hundreds of their constituents who say, “I want you to see the other side of it,” they do sit up and take notice. We’ve seen some really significant gains based on that, whether it’s one mom starting a petition or an environmental group saying we have to do something about an issue. It’s a critically important part of the process and change doesn’t happen without it.

What is the most important change you’d like to see in the food system in the next 5-10 years?

I’d like to see a better balancing of resources. We spend multiple billions of dollars a year subsidizing a small number of commodity crops—corn, wheat, peanuts, cotton. We spend very, very little on encouraging more access to local food, more healthy and sustainable ways of growing the food, less dependence on chemicals, and a wiser use of our resources.

We should be enhancing those parts of the food system that provide economic opportunities for farmers and rural economies, and that deliver more of what the consumer is looking for at a more reasonable price. We could be doing that, and I think that’s what the American public wants us to do with those resources. On the other side, these subsidies have made it unreasonably inexpensive to say, use a lot of corn products in processed food and make those items artificially cheap. Vegetables and other healthier foods aren’t getting those subsidies, so there’s a disproportionate cost associated with them.

What do you think needs to happen for that change to occur?

A lot of us are working on this. We fight in the legislative policy arena on amendments that put a cap on how big the subsidy can be, or that promote programs to help young farmers, or help farmers put a small creamery or a hoop house in their field. We push on the good stuff on the Farm Bill and in appropriations, and we fight back on the bad stuff like subsidies. But, first [we] need to elect more politicians that care about these issues and hold them accountable for their vote so that they do the right thing. Keep that grassroots pressure on members of Congress so that they know that people are watching them.

Who are the people who inspire you?

Eliot Coleman and his wife Barbara Damrosch. They run a wonderful sustainable farm and have been outspoken on policy issues. Eliot has also provided a lot of innovations that have made it easier for small farmers to make their farms economically viable, and he’s been doing that for decades.

I am also so inspired by the number of young people … who have used their entrepreneurial skills and taken the risk of starting a farm themselves. They use their creativity in coming up with a value-added product, or finding new markets or new technology. In my home state, so many young people are reengaging in farming or family farm operations when they pick up where their parents left off. They’re sharing their opportunities with their neighbors and starting food processing co-ops and food hubs and community kitchens. I think this is an individual act that farmers are taking on every day. That’s where a lot of the difference will come from.

I have to say, heirloom tomatoes that you harvest off the farm in the middle of the summer with a little sweet corn on the side, is probably the best possible food.