The Future Strawberry: Will the Loss of a Major Pesticide Help the Industry to Go Green? 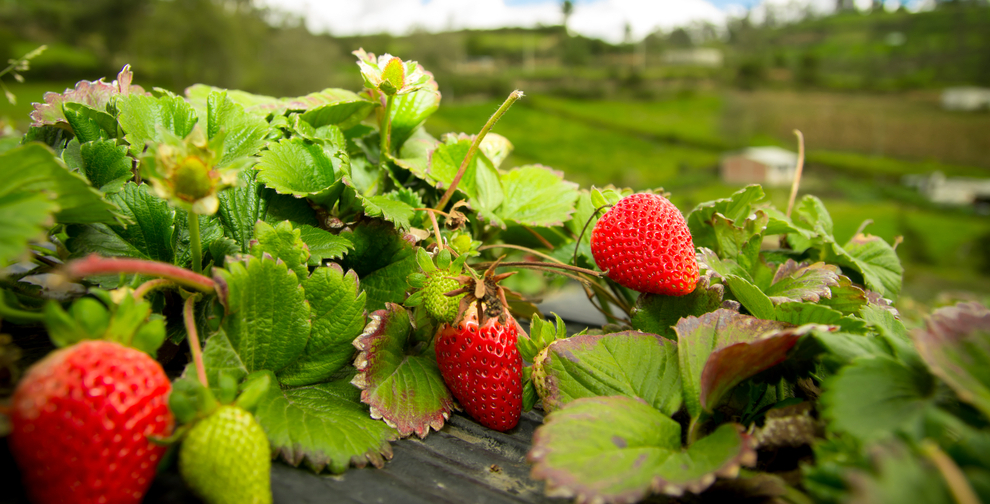 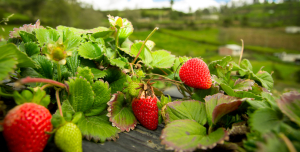 When it comes to growing strawberries, Farm Fuel, Inc., a Watsonville, California-based company, is on the cutting edge.

The company grows wild and domesticated mustard and lightly processes the harvest into mustard meal, a soil amendment. They also work with farmers on a technique called Anaerobic Soil Disinfestation (ASD). This precise farming technique involves applying a combination of water and carbon-rich material (think rice bran, grape pomace, mustard meal, and molasses), and then wrapping the soil in plastic. Under the plastic, the ingredients combine to create anaerobic conditions.

The idea with both of these approaches is to kill the organisms that cause the long list of diseases that plague strawberry farmers–without pesticides or fumigants (a form of pesticide that treats the soil before anything is even planted). Why the search for alternatives?

“As pesticide use becomes more restricted, growers have a greater need for solutions that are effective and affordable,” says Farm Fuel CEO and research director Stefanie Bourcier, who has received sizable grants to work with both organic and conventional farmers on these non-toxic techniques. “Ultimately, ASD and mustard meal offer both organic and conventional growers more options.”

The restrictions Bourcier is talking about are no small change. For over 40 years, U.S. strawberry farms–88 percent of which are in California–have relied on methyl bromide, the pesticide that works like a “magic bullet” to control diseases, persistent pests, and weeds. Methyl bromide has made it possible for growers to blanket coastal communities—from Santa Cruz south to Ventura County—with acres of perfect red berries that sell for as little as $2 to $3 a basket.

Now, after a very long, gradual phase out, this fumigant–also a potent neurotoxin, known for affecting the health of populations living close to strawberry fields and a contributor to the disappearance of the Dead Sea–will no longer be in use by 2017.

Methyl bromide sterilizes the soil by killing off virtually all micro-organisms, good and bad. But the chemical also contributes to the thinning of the stratospheric ozone layer when it evaporates during application. For this reason, thanks to the internationally binding Montreal Protocol, it has been gradually disappearing from the marketplace since 1993.

Now, most conventional growers–many of whom say there are no other reliable methods to eradicate pests and diseases–are scrambling for other options. Farmers and regulators have invested considerable resources into other fumigants, including the highly controversial methyl iodide—another known carcinogen and neurotoxin that is considered one of the most toxic chemicals on earth. But after public uproar, the manufacturer, Arysta LifeScience Corporation, withdrew it from the market in 2012.

And while other chemicals are plentiful in the marketplace, some advocates of alternative farming methods see a positive side to the phase out: New organic and agroecological methods–like the ones Farm Fuel is working on–are on the rise in the $2.6 billion industry. 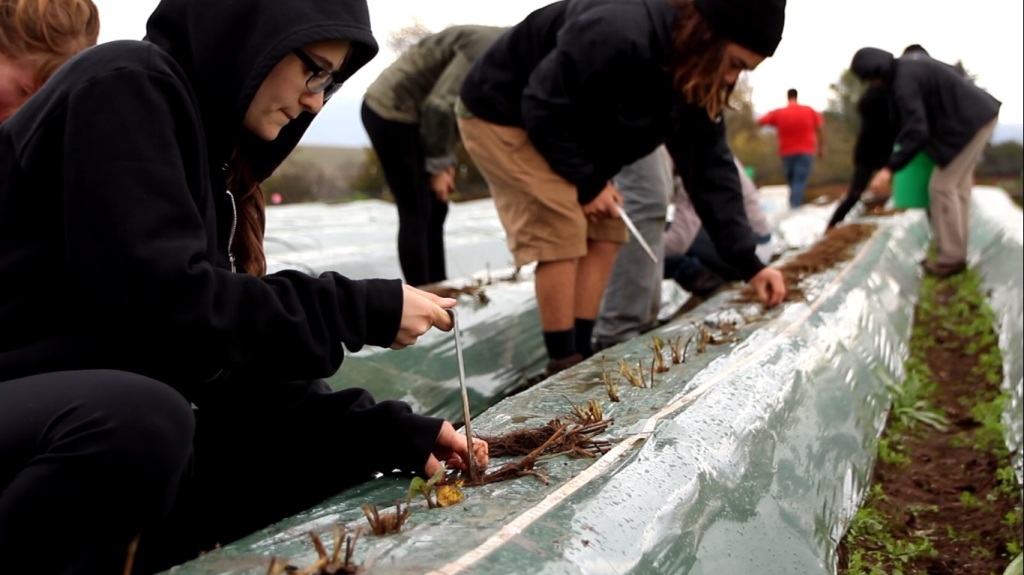 While the European Union phased out methyl bromide completely in 2013, the Environmental Protection Agency (EPA) has been granting so-called critical use exemptions (CUEs) since 2005. These have been granted whenever an industry argues that not using methyl bromide would create “significant market disruptions” and when there are “no technically or economically feasible alternatives or substitutes.” But after 2016, CUEs will no longer be an option.

For California growers, this change is worrisome. Today, strawberry farms and nurseries account for nearly all methyl bromide used in agriculture. But they’ve only been granted a CUE for 412 tons this year, enough to treat 8,000 acres, or 20 percent of the 40,000 acres planted in strawberries, according to Carolyn O’Donnell, Communication Director at the California Strawberry Commission (CSC).

In 2016, that number will drop to 255 tons–enough for only around 9 percent of the current strawberry acreage.

To help growers make the inevitable transition, University of California and U.S. Department of Agriculture (USDA) researchers have spent several years testing methyl bromide alternatives, both chemical and biological, with well over $5 million in grants.

Professor Carol Shennan, an agroecologist at the University of California, Santa Cruz, is at the forefront of the research with multiple year grants from the USDA to study Anaerobic Soil Disinfestation at the farm scale. Over 10 years, Dr. Shennan and lead researcher Dr. Joji Muramoto have seen positive results with field tests on farms around the state. In fact, a government document notes that, “These experimental trials have shown good disease suppression and fruit yields comparable to methyl bromide treatments and other chemical fumigants.”

Farm Fuel brought ASD to market in 2011, which was its first commercial introduction. In 2013, California’s Department of Pesticide Regulation (DPR) awarded the company a three-year grant to introduce conventional growers to the non-toxic alternative. Currently, the company has 22 trial sites across California and another 28 commercial clients. It estimates that about 25 percent of the new acreage it treated in 2014 was on conventional farms. Farm Fuel also claims that it is cost effective, with a per acre cost of $2,700 compared to $3,900 or more for methyl bromide.

Despite these efforts, most conventional growers will begin using other fumigants. In particular, the EPA recommends as substitutes chloropicrin and 1,3-D, and combinations of the two with other chemicals. Neither is considered as effective as methyl bromide and both have negative health impacts.

After World War I, leftover stockpiles of chloropicrin—a weapon then nicknamed “vomiting gas”—were directed to agricultural use. Although its use is on the rise in the U.S., chloropicrin was phased out in Europe in 2013 due to respiratory health effects. The other go-to fumigant is 1,3-D, a known carcinogen produced by Dow Chemical. The DPR outlawed 1,3-D in 1990, but allowed it back on the market in 2004 with restrictions, anticipating its need in light of the phase-out of methyl bromide.

DPR Director Brian Leahy believes that ASD shows promise and he says that the department is actively committed to helping California farmers find less toxic ways to tackle soilborne pests and reduce their use of chemical fumigants. Leahy, a former organic rice farmer, said in a recent email exchange: “It is no secret that the department has and continues to take a long hard look at fumigants to ensure they are used in a protective manner. DPR believes the right to farm does not mean the right to cause harm.”

“Slowly but surely the fumigant tools are going away,” says the California Strawberry Commission’s O’Donnell. The Commission also received a grant from DPR to study ASD in 2014.

As O’Donnell sees it there is no one-size-fits-all solution to the pests that plague strawberry growers, but adding ASD to the toolbox is good for all farmers. “What is coming out of the research is essentially a cookbook full of recipes,” says O’Donnell. “‘If you have this soil type and these types of disease organisms, then these are the materials and methods you need to use,’ and so on.”

O’Donnell says that strawberry farmers are already in the habit of trying out new techniques on small sections of their fields—and that 20 percent of conventional growers also have organic operations. Plus, she says, “Anyone who’s working on strawberries—they’re all talking to each other.” CSC also hosts “field days” to help farmers connect to scientists.

However, O’Donnell is hesitant to embrace biological controls because she says it’s unclear whether they’ll be able to perform as consistently as fumigants over the long term.

What farmers need—or want—is another magic bullet. O’Donnell, whose organization represents approximately 400 farmers, points to the up-front investment strawberry farmers make, spending up to $20,000 per acre for the land, plants, fertilizer, etc. before they harvest a single berry. “If your crop peters out, you lose your investment—and sometimes your house or your business.” In other words, farmers have to be sure they’ll protect their investment or they won’t adopt new methods.

Some farmers have been growing strawberries for years without methyl bromide. Take Jim Cochran, president of Swanton Berry Farm, a 75-acre farm in Davenport, just north of Santa Cruz. Cochran is also the first farmer to grow organic strawberries in the state. He sits on the board of directors at Farm Fuel and is part of the company’s ASD trials along with seven other strawberry farms, in collaboration with the Center for Agroecology & Sustainable Food Systems at U.C. Santa Cruz.

Like any strawberry farmer, Cochran is concerned with pests and diseases and he is interested in ASD. However, for over 30 years he has relied on traditional organic practices such as adding compost to his soil and crop rotations. Each field gets planted in strawberries just once every five or six years. During other years the fields are planted with crops like cauliflower or broccoli—which are modestly profitable—or the fields are fallow with cover crops like alfalfa. On the other hand, conventional growers who rely on chemical fumigants grow strawberries in the same field every other year.

“The multi-crop organic farm is vastly more complex than the single crop chemical strawberry farm. It requires much more management,” says Cochran. Crop rotation and organic methods are expensive and the yields are generally a little lower. “It’s not easy. What we’re up against is people who use chemicals and produce strawberries at $2.50 a basket and can still be quite profitable,” he says.

Amigo Cantisano, a leading organics advisor who helped found the Ecological Farming Association and California Certified Organic Farmers (CCOF), says that ASD is “an increasingly viable alternative to methyl bromide, and that’s a good thing.” But he worries that fumigants allow farmers not to “deal with soil biologically in a holistic way.”

As Cantisano sees it, controls—whether they are chemical or biological—allow farmers to forego building up the necessary soil foodweb. And fungicides wipe out soil flora, which create resistance to the very pathogens methyl bromide is used to kill. “The lack of a long-term crop rotation system eliminates the opportunity for the soil to cleanse itself biologically,” he says.

Of course, it’s not just conventional growers who rely on methyl bromide. While organic farmers do not use it in the fields, their certified pest-free nursery “starts” (baby plants) are grown in soil sterilized with methyl bromide, just like conventional growers. This is legal for certified organic farms, and the justification is that even one diseased start could ruin an entire crop.

According to Lisa Bunin, Organic Policy Director at the Center for Food Safety (CFS), “Both stages in the strawberry production process use enormous amounts of methyl bromide, and both represent critical junctures in the supply chain that need to figure out alternative production strategies.” According to a recent in-depth report by the Center for Investigative Reporting, CFS is leading a project to grow an experimental nursery crop of organic strawberry starts in Central California, and late last year, six organic farms planted those starts in soil for the first time.

While the DPR will clearly continue to allow—and indeed support—the use of chemical fumigants, Director Leahy is cognizant of the bigger picture. “In order to better understand pest control for any crop, California needs to better understand the soil ecosystem and how pests behave,” he says. “This requires a major public investment and dedicated research.”

Meanwhile, it’s likely that companies like Farm Fuel will gradually make inroads into the market as they develop relationships with the many curious farmers willing to give ASD and other biological approaches a try.

Back in 1996–just a couple years after the Montreal Protocol’s phase-out went into effect–some individuals at the EPA were already talking about non-chemical approaches. In a paper they released that year, the officials wrote: “Organic strawberry production is an effective integrated approach that offers an alternative to methyl bromide use for California strawberries.” Sometimes we have to look back to look forward.