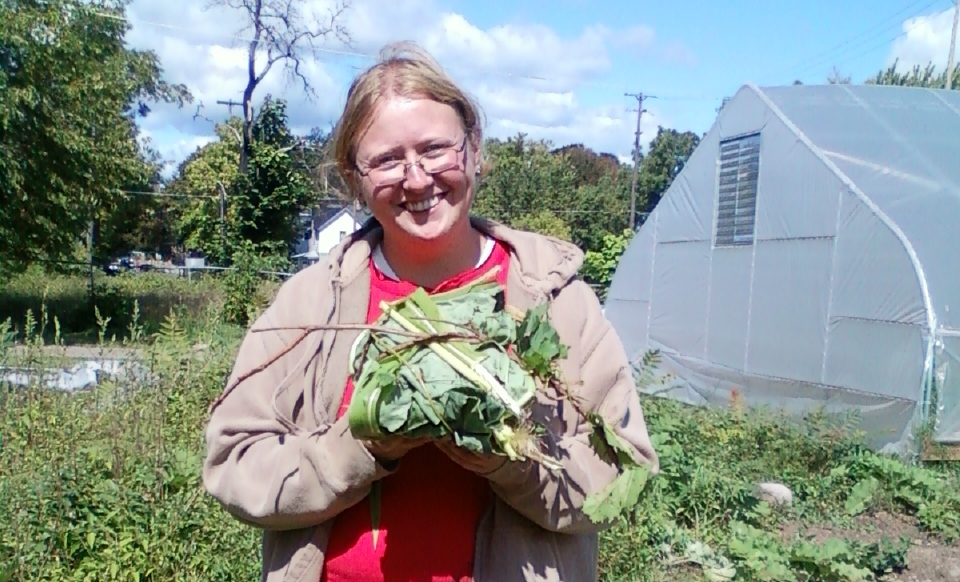 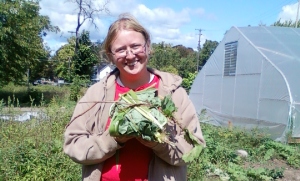 Thirty-year-old Roxanne Adair is a trailblazer. In 2010, she and a friend started Flint River Farm in Flint, Michigan, a city where urban farming isn’t the norm. Adair’s background was in fisheries, wildlife, and biology, and she used the knowledge gained working at the Genesee County Land bank to buy and rent city lots, totaling nearly three acres, in the heart of Flint.

This process wasn’t easy. Flint’s history mirrors that of other rust belt cities. The city had a robust economy based in the auto industry until it began to decline in the 1970s. When General Motors closed multiple plants and cut thousands of jobs in Flint in 1989, work suddenly became scarce. As unemployment and crime increased, the media dubbed Flint “the Murder Capital” of the U.S.

Despite the city’s challenges, Adair and her partner jump-started their business with a grant from the Ruth Mott Foundation. Their goal was to create a sustainable business model for urban farming in Flint.

Since her partner left in 2012, Adair has continued to expand the farm on her own, and the space now occupies 17 city lots. Flint River Farm produces a wide array of heirloom crops, including apples, blackberries, strawberries, cherries, corn, melons, tomatoes, squash, dried beans, carrots, beets and Brussels sprouts—the list goes on and on. 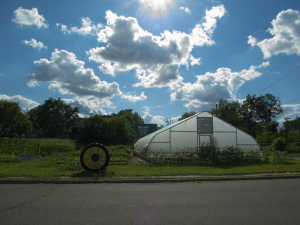 While Flint River Farm is filled with fresh produce, the neighborhood still faces its challenges. Across the street is a burned-out convenience store. The main drag, Saginaw Street, is a block away and is home to strip clubs, a pawn shop, and a liquor store.

Theft is a frequent problem on the farm, but Adair doesn’t begrudge her hungry visitors. “If you need [food] bad enough to steal it, you need it more than I do,” she says. But, she encourages people to reach out to her first: “Tell me and I will harvest it for you. I’ll wash it for you and have it ready.”

Vandals also come through the farm regularly, slashing the thick polyethylene walls of the hoop houses or spray painting gang paraphernalia on the sides. Repairs and replacements can cost thousands of dollars.

By and large, however, the long-time residents of the neighborhood have become Adair’s friends. They share tools, talk over the tomatoes, and collaborate on composting. Adair recalls that when she started the farm, she rarely saw the neighbors outside. “They would mow their lawn and then run back inside,” she says. Now people have planted flowers and are taking pride in their landscape. “I can’t take credit for that,” says Adair, “but I think [the farm] has caused people to come outside more and not hate their surroundings.”

Throughout the year, Adair shares her knowledge through community workshops, on topics as diverse as urban foraging, composting, maple syrup making, organic gardening, and season extension. Although she charges a small fee for the classes, Adair admits that she doesn’t turn anyone away. “There is a spirit in the city of Flint that I haven’t found anywhere else,” she says. “The people who have stayed have been through some really hard times. I have a respect for the struggle.”

Flint River Farm aims to address the city’s high unemployment rate by providing jobs to Flint residents. Using grant money, Adair hired local teenagers to farm and work at the farmers’ market. At the height of the growing season, she employed nine full-time staff members and two interns. As the farm moves toward towards self-sustainability, Adair hopes these jobs will become more permanent. When the farm first started, it was entirely grant-funded. This year grants accounted for only 40 percent of the operating costs.

To sustain the farm, Adair has diversified her product line. She has sold lip balm made from her bees’ wax, salad mixes from the hoop house, teas from dried herbs, eggs from her small flock of chickens, and nut butters she grinds herself. This month, she began selling bulk dried goods like organic oats and flour at her stand in the market. “I am confident that with bulk food bins we will be sustainable next year,” she says.

Last summer, the city threatened to confiscate the chickens Adair keeps at her house. Flint’s Blight Authority gave her 30 days to dispose of the birds. Adair used that opportunity to try to change a 1968 city ordinance that prohibits residential homeowners from keeping “fowl” on their property. She mobilized her support network, worked with the city council, and created a ”Friends of Flint Chickens” Facebook campaign.

On the last day, Adair sat on her front porch and waited for the police to come. She highly doubted that in a city with only three police officers on duty at a time, one of them would take time away from chasing drug dealers and thieves, to chase her chickens. She waited all day. No one came.

Like her chickens, Roxanne Adair is in Flint to stay.