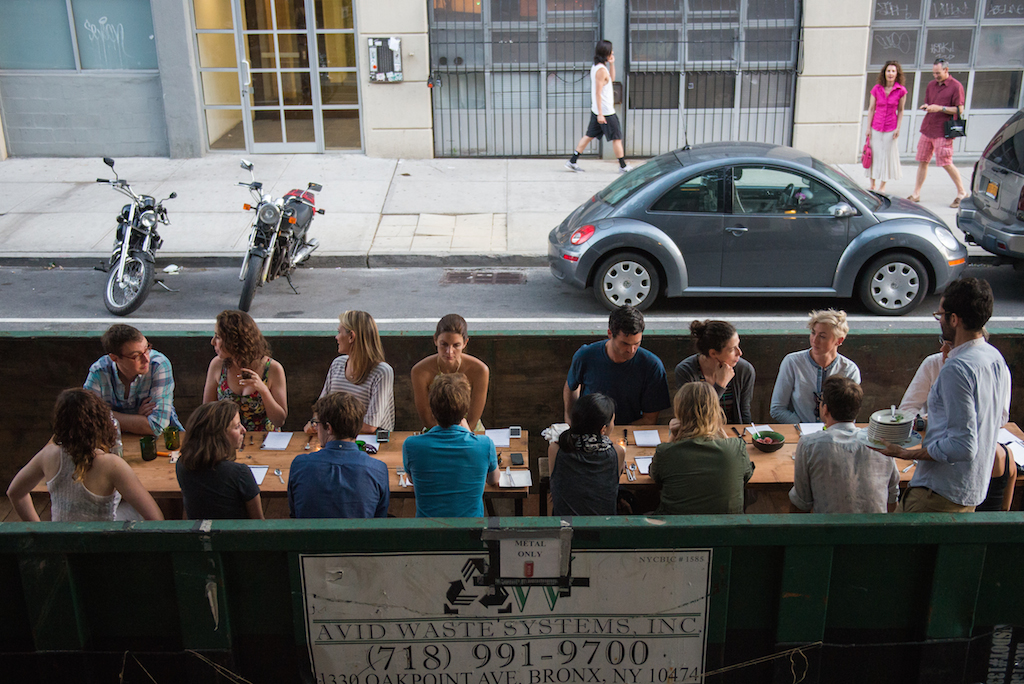 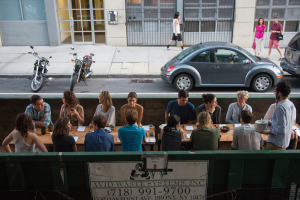 A recent photo of Salvage Supperclub stopped me in my tracks. The photo showed a dozen people happily dining inside a dumpster, with the goal to draw attention to the growing issue of food waste in the U.S. Like all reasonable people with an extreme interest in food, I signed up to get an alert for the next dinner.

Salvage Supperclub is the brainchild of Josh Treuhaft, a recent graduate of the Design for Social Innovation program at the School of Visual Arts in New York City. Treuhaft was a self-described “compost junkie” before he enrolled. As he tested different hypotheses, it became clear to him that “most people don’t get excited about waste. Wasting less is hard to do and it makes you feel guilty.”

That’s when he turned to food. In conversations with Miya Osaki, one of several of his thesis advisors, Treuhaft realized that, “people care deeply about food in a much more profound and motivating way than they do about waste.” And for good reason. The Food and Agriculture Organization has reported that up to one-third of food produced globally winds up in the landfill. Now more than ever, food waste facts like these are captivating the public’s attention.

The dinner-in-a-dumpster was part of Treuhaft’s graduate thesis called “Eat Everything.” The six-course meal, prepared by Chef Celia Lam, was comprised almost entirely of food that would have otherwise been destined for the landfill, including day-old bread and bruised stone fruit. The dumpster itself had been cleaned and featured a large wooden picnic table. The whole scene took place on a quaint brownstone block in Cobble Hill, Brooklyn.

“The goal,” wrote Tueuhaft on Pixable, where the Supperclub was covered last summer, “is to inspire and empower people to eat more of the edible food in their lives.” He and Lam provided guests with the recipes of the dishes served that evening, so they could “start using more of the food in their own lives.”

Since then, Treuhaft and Lam have hosted seven meals together. The two work to source the ingredients from farmers’ markets (fruit that is overripe and might not sell), directly from nearby farms (kale stems, beets too small to sell, herbs past their prime) and restaurants (unused cuttings from vegetables––stalks, shavings, and peels).

Chef Lam is a graduate of the Natural Gourmet Institute, where she was trained to throw away very little and she sometimes refers to her approach as “root-to-frond” cooking. In classes at the institute the staff weighs all of the students’ waste to inform future purchasing. 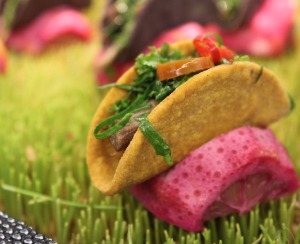 The dinners, which take place in the same dumpster, offer vegan tasting menus with all profits from the tickets going to charities like Culinary Corps and City Harvest. Around half of the guest list is made up of friends and friends-of-friends and the remaining handful comes from an email subscriber list. The question Treuhaft continues to ask is: “How might we leverage the social, experiential, creative, and sensory elements of food and dining to achieve the same ends [with] less waste?”

Most recently, Treuhaft and Lam catered the holiday party for Arup Partners, the global engineering and consulting firm where Treuhaft now works. In an evolution of Salvage Supperclub, he interviewed local caterers in order to find one willing to use at least 50 percent salvaged ingredients, to serve roughly 300 people.

He and Lam found Kalynn Dong of Toi et Moi Events. Dong used coffee grounds to flavor the meat trimmings for the tacos, which came from a prior event. She also used clipped wheatgrass from Union Square Grassman to display the tacos; chickweed, blemished hot peppers, and squash from the farm at Queens County Farm Museum; and cauliflower stems from Norwich Meadows Farm in the sushi rolls she served.

The event was challenging for Dong, who didn’t know what ingredients would be available until the week before the party. But the experience taught her a lot. “The ‘reuse’ method helps me from both a cost and a time perspective,” she says.

Other than a few guests wishing there were more tacos (what else is new?), both Treuhaft and Arup, were thrilled with the results.

Treufhaft’s eighth Salvage Supperclub is slated for January 16 at an art gallery in Manhattan. This will be the first dinner held away from the dumpster and will include a panel on food waste. On the calendar this spring are several more proposed dinners in other locations, including San Francisco and Burlington, Vermont. Treuhaft’s ultimate vision is to see these meals sprouting up all across the country.