MicroGreens Gets Kids Cooking Healthy on a Food Stamp Budget 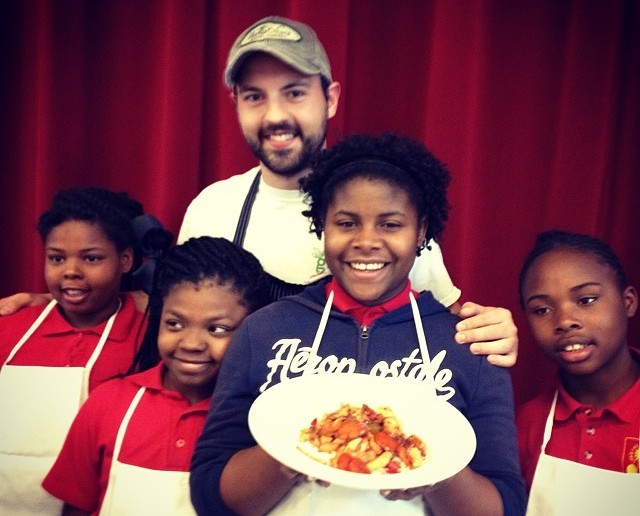 This fall, Robert Wood started teaching an after-school cooking class in a low-income area of Washington, D.C. When a student’s mother raved about a soup the class had made the week earlier, Wood was thrilled. It was a sign that the recipe itself was a hit and it meant that the student had gone home energized to try the recipe again at home, with her own family.

That’s exactly the type of response Chef Alison Sosna had in mind when she launched MicroGreens, the nonprofit that hosts Wood as a teaching “fellow.” The program’s cooking classes aim to get kids from low-income families enthusiastic about healthy food and empowered to use their newfound cooking skills to take charge of their health.

Sosna founded MicroGreens just over two years ago to use her cooking skills and experience as a chef to help others be healthier, even when they don’t have a lot of money to spend on food.

MicroGreens students are sixth and seventh graders who have applied for the program and classes are held inside participating schools, using the schools’ kitchens. Because they have to make an effort to be there, engagement and turnout tend to be high—with around 95 percent attendance, according to Sosna. The students take weekly classes for eight weeks to learn everything from roasting and braising to kitchen safety and knife techniques, all with the goal of helping them and their families make nutritional food choices and lead healthier lives for the long-term.

“The whole point of the program is empowerment,” says Wood. “What’s fun for me is teaching them how to make a chicken stir-fry, for example and then trying to get them to put in snap peas, or say, ‘Oh, carrots would be good in this.'”

The class focuses on a different recipe every week, each designed to cost no more than $3.50 per meal for a family of four, or the budget of a family on Supplemental Nutrition Assistance Program (SNAP), or “food stamps.” This is the core of the program: to help kids and families understand that wholesome food is within reach even on a strict budget. They don’t talk about SNAP in class, though; it’s more of a show-and-don’t-tell strategy.

Most students are already fully aware of the constraints of a budget. MicroGreens only partners with schools where 70 percent or more of the students are enrolled in the National School Lunch Program. The program focuses more on opportunities that exist within a budget, not the limitations.

MicroGreens helps its students keep their food budgets down by planning out meals in advance, with the idea of getting the most out of a week’s shopping list. For example, when the kids learn how to butcher chicken, the first recipe they cook is herb chicken soup, and the next week they make apple chicken salad, so they can use different parts of a whole bird.

The menu so far has been pretty meat-centric–although the actual portions of meat are quite small, and surrounded by vegetables, legumes and grains–but Sosna says they’re looking at “menu 2.0” for next year with more vegetarian options because some participants have been vegetarian. Plus, Sosna adds, there’s a bonus: cooking vegetarian meals can be cheaper.

MicroGreens is running a program in three schools this semester–two in D.C. and one in Brooklyn, New York–and has been in a total of seven schools since launching in 2012. A cooking competition is held during the last week of each class and once the students “graduate,” they leave with a certificate, recipe binders, a cutting board, and crock-pot.

Sosna says the program has been a hit with the kids so far. “We’ve gotten a lot of kids who go home and cook with their families,” she says, adding that they even hear from some adults wanting to join the classes.

Wood recalls the mother who loved the soup, but says he’s heard similar experiences from other students.

Even better, he’s noticed kids applying what they’ve learned about nutrition to the food choices they make throughout the week. One girl, he says, announced in class one day that she was eating more greens because she’d learned they were a good source of calcium, which she said is important because she doesn’t like milk.

That, for Wood, is a pretty good sign that the class is on the right track.