McDonald’s and In-School Marketing: The Clown Speaks From Both Sides of His Mouth | Civil Eats

McDonald’s and In-School Marketing: The Clown Speaks From Both Sides of His Mouth 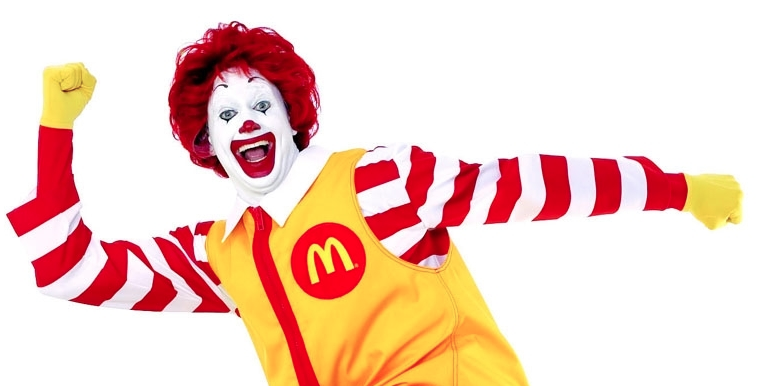 
Among the strategies discussed on the call was a need to “start with mom” by continuing the company’s  “McTeacher’s Nights,” i.e., school fundraisers in which teachers are put to work at a local McDonald’s restaurant and a portion of the night’s proceeds benefit the school.  In response to an investor question on the call, Andres then reiterated that the corporation’s financial performance would benefit by increasing its presence in schools.  Specifically, he said that McDonald’s franchise owners:

“have got to be in the schools. When you look at the performance relative to peers of the operators [whose] restaurants are part of the community–it’s significant. So we’re celebrating that…this is an essential part of being an McDonald’s owner operator. This is our heritage. And schools are a big piece of it.” Emphasis mine; you can listen to a complete recording of the call here.


So far, the company’s new willingness to double down on in-school marketing hasn’t been given much favorable coverage in the press. CBS News had a hard-hitting piece about it last week (“Why McDonald’s says it ‘wants to be in the schools‘”) and food policy reporter Lauren Rothman had a similarly critical post in Vice, “McDonald’s Targets Teachers and Students to Boost Flagging Sales” (I was pleased to be quoted in the latter.)

But the most troubling aspect of McDonald’s plan is that it flatly contradicts statements made on the corporation’s behalf before the federal government regarding the intent and impact of such in-school marketing.

Here’s the background. Last February, the USDA issued proposed new rules for school wellness policies which, among other things, would instruct districts to ban marketing on school campuses for food and beverages which don’t meet the new, stringent “Smart Snacks” nutritional guidelines.  Such a rule, if adopted across the board, would effectively put an end to McTeacher’s Nights and most other McDonald’s school-related initiatives. But USDA also expressly solicited comments from the public on whether such a ban should in fact extend to:

food and beverage advertising or marketing on the school campus during the school day via …  indirect advertising (via corporate sponsored educational materials, teacher training, contests and incentives, grants, gifts, or event sponsorships) …

Not surprisingly, the Children’s Food and Beverage Advertising Initiative (CFBAI), an industry self-regulatory group of which McDonalds is a member, submittedcomments to the USDA which argued that such programs ought to be allowed on school campuses —even if sponsored by companies like McDonald’s which sell junk food—so long as the corporate branding connected with such programs is used only for the sake of  “transparency” and “where the ‘advertising’  impact is merely incidental.”

But as McDonald’s U.S. president Andres’s own comments to investors on December 10th make abundantly clear, getting the company’s marketing messages in front of impressionable school kids and their parents is anything but “incidental;” according to the McDonal’s top executives, in-school marketing is actually critical to its bottom line.

This isn’t the first time McDonald’s has engaged in high-level corporate double-speak when it comes to its in-school marketing practices. Back in May, I attended the annual McDonald’s shareholder meeting with five other moms as guests of Corporate Accountability International’s Moms Not Lovin’ It Campaign (“Speaking Truth to Ronald.“) When one of the women in our group, Sally Kuzemchak of Real Mom Nutrition, raised her concerns about McDonald’s youth marketing practices, including its in-school marketing, Thompson surprised many in the room when he told her unequivocally that “we don’t put Ronald out in schools.”

That statement was, of course, factually inaccurate at the time Thompson made it, and a few months later the company’s spokesperson had to backpedal when the statement became the subject of a letter campaign organized by the Campaign for a Commercial-Free Childhood.

It remains to be seen whether the USDA will buy into CFBAI’s laughable notion that McTeacher’s Nights and other forms of in-school fast food marketing (whether implemented by McDonald’s, Dominos Pizza, Chick-Fil-A or any other chain) don’t constitute “advertising” and shouldn’t fall under the proposed Smart Snacks on-campus advertising ban. The comment period on the proposed wellness policy rules ended in April but we don’t yet know when the final rules will be released.