Seasons Greening: How Christmas Tree Farmers Are Cutting Down on Pesticides 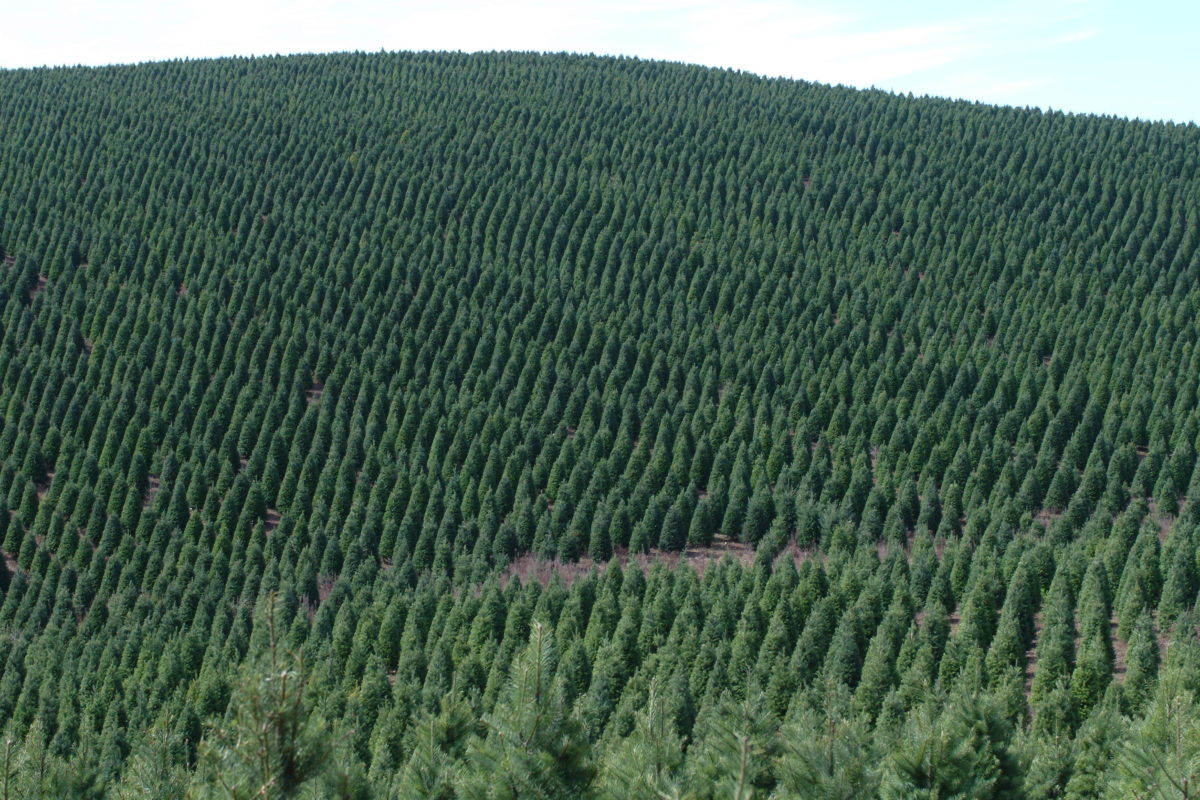 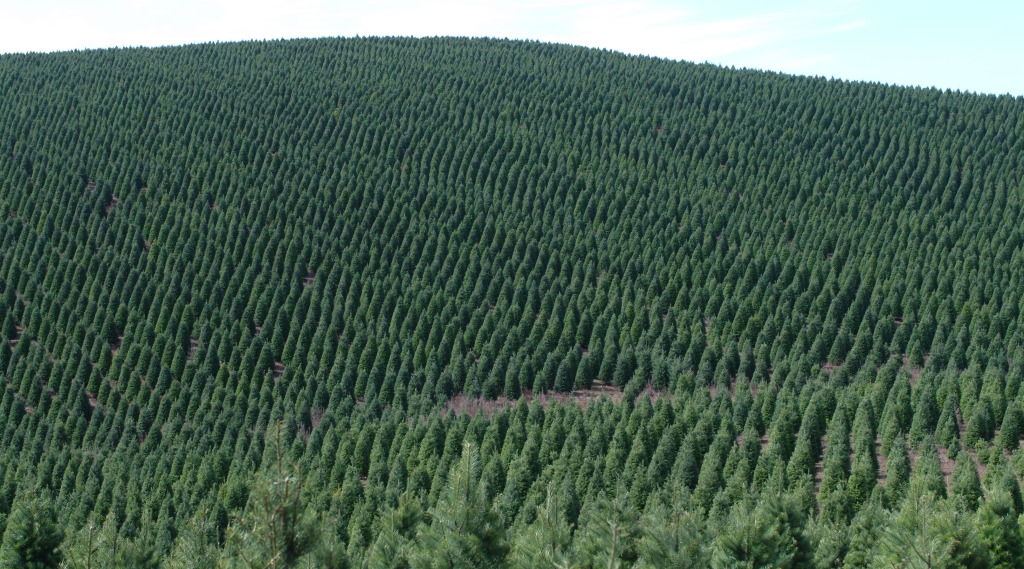 Each winter, tens of millions of Americans buy and decorate Christmas trees. Yet few of us think about what it takes to keep these trees looking so healthy and lush.

For most growers, it takes pesticides–and lots of them. It turns out that the majority of Christmas tree farms are plagued with destructive pests and noxious weeds that suck nutrients and moisture from the soil, leaving young trees sickly and ugly. As a result, the Christmas tree industry has become dependent on chemicals of all sorts. Most Christmas tree growers regularly spray Roundup and other herbicides to control noxious weeds and Lorsban—an organophospate insecticide that has been linked to nervous system damage, among other things—to kill aphids, which damage trees by yellowing foliage and stunting growth. Growers also use fungicides to control diseases.

We don’t eat our Christmas trees, but we do live with them in our homes for a few weeks at a time. Should we be worried that our children or pets are being exposed to residual chemicals?

Though no studies have been conducted to see if Christmas trees still have pesticides on them at harvest, Chal Landgren, a Christmas tree specialist at Oregon State University’s Department of Horticulture, says the amount of residue still on the tree by the time it gets to your house is minor.

That’s because most pesticides are sprayed in the spring or summer, so by the time December comes around, they’ve been broken down by the elements. According to Jeffrey Jenkins, Ph.D., an environmental toxicologist and professor at Oregon State University, every pesticide label also has a “pre-harvest interval” on it telling farmers when they can apply their last spray before harvest. “These products have been evaluated by the EPA and they have a very long and involved process for evaluating potential impacts on human health,” says Jenkins.

Even if consumers aren’t being exposed to these chemicals, it’s still a worthy goal to reduce their use on Christmas tree farms–both to minimize workers’ exposure and to curtail the amount of toxic chemicals that trickle into our rivers and oceans, threatening the health of aquatic life.

Oregon is the largest Christmas tree producer in the nation. Over 6 million trees are harvested in the state every year, and they are shipped all over the world—from Hawaii and New York City to Mexico. In fact, one reason Christmas tree farmers use so many pesticides is because countries like Mexico strictly enforce rules banning pests on imports. (Hawaii, which just received a shipment of about 200,000 Oregon trees, is similarly strict.) Though no one knows how many pesticides the state’s Christmas tree industry uses—funding for a program requiring reporting was cut in 2008—over 500 pesticide labels are registered for use by the Oregon Christmas tree industry.

Exactly how much pesticide from Christmas tree farms is ending up in Oregon’s rivers and streams is unknown. But The Oregon Department of Environmental Quality (DEQ) has been monitoring pesticide levels in the Clackamas River annually since 2005 and has found many toxic pesticides at levels exceeding EPA benchmarks. Among the most worrying, according to DEQ’s toxics coordinator Kevin Masterson, are chlorpyrifos (Lorsban), bifenthrin (Brigade), and chlorothalonil (Bravo Weather Stik). At least two of these—chlorpyrifos and chlorothalonil—are used by the Christmas tree industry, which is concentrated along the Clackamas River watershed. Not only does the Clackamas River provide drinking water for over 300,000 Oregonians, it’s a wild salmon stronghold and supports populations of winter steelhead, cutthroat trout, and lamprey.

Last year, an interagency team called the Clackamas Basin Pesticide Stewardship Partnership was awarded state funding to work with the two biggest agriculture sectors along the Clackamas River: nurseries and Christmas tree farms. The Partnership—which is comprised of the Oregon Environmental Council, Oregon State University (OSU), and the Clackamas County Soil and Water Conservation District, among other groups—has focused on educating growers about how to reduce pesticide use, risk, and runoff. Over the past year, Integrated Pest Management (IPM) experts at OSU have designed pesticide risk reduction trainings, including a beneficial insect workshop for Christmas tree farmers. (There will be another training this February.)

These workshops give growers who do want to phase out pesticides the tools to do so. But they probably won’t phase them out entirely, admits Allison Hensey, program director for agriculture and watersheds at the Oregon Environmental Council. “Christmas tree customers demand a perfect-looking product,” she wrote via e-mail. “This means growers have to find highly effective pest control methods to avoid aesthetic damage to their crops.”

The other program is Socially and Environmentally Responsible Farm (SERF), a certification tool for sustainable Christmas tree farms that Landgren helped launch. Founded in 2011,  SERF requires farms to prove they have a robust sustainability plan, with active programs in five areas: biodiversity, integrated pest management, soil and water conservation, worker safety, and farm stewardship. A SERF-certified Christmas tree isn’t 100 percent pesticide-free, but if you buy a tree with the SERF logo, you can be sure the farm is working to reduce its use of toxic chemicals and prevent soil erosion. So far, the program—which certifies only Oregon and Washington farms—has certified four farms. (If you can’t find a SERF-certified tree near you, Certified Naturally Grown has certified one Christmas tree farm in North Carolina and there are six USDA organic Christmas tree farms). 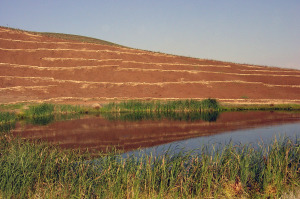 Noble Mountain, a 4,000-acre Christmas tree farm in Salem, Oregon, was one of the first to apply for certification. “We’ve always tried to do what’s right for the ground and the soil—it’s our livelihood,” says farmer and General Manager Bob Schaefer. Back in 1985, Schaefer introduced “straw water bars”—bales of straw placed strategically along the hillside to reduce erosion (see photo on the right). He also discovered that ladybugs love to eat aphid eggs, which reduced reliance on broad-spectrum chemicals like Lorsban. “We were doing a lot of things right, but we weren’t documenting it,” he says.

The SERF program got him to document these proactive environmental practices, and pushed Schaefer and his crew of 70 full-time workers to take their practices to the next level.

To fulfill the IPM category, for example, Schaefer trained his crew to identify every plant on the farm—beneficial plants as well as weeds—in addition to insects, birds, and other animals. As a result, his employees have become indispensable to catching problems early, spotting pests that attack the trees’ roots, and patches of Canadian Thistle, which, like other weeds, compete with young trees for soil nutrients and moisture.

“Thirty years ago, you’d spray the whole field with Roundup,” says Schaefer. Today, workers use specific herbicides for specific weeds: Stinger for Canadian Thistle; Asulox for Bracken Fern. (The farm does still use Roundup for general weed control, but they use it far less.) Instead of spraying pesticides via helicopter, crew members now go out and target the few trees that are infested. This approach not only saves the farm money—renting a helicopter is not cheap—it’s better for the workers’ health.

The SERF standards are part of what motivated Schaefer to buy a small drone to map the entire farm with photos and videos. (The standards require baseline mapping, though most farmers do it via Google.) While it may seem extreme to buy a drone to monitor Christmas tree health, Schaefer says the device has already paid off. “The quality of the pictures is so good … you can actually see sick trees” says Schaefer.

Noble Mountain alone harvests 600,000 trees each winter—most of which are sold at Home Depot and Walmart in the Northwest, California, Arizona, and Texas. And even though Schaefer hasn’t noticed increased sales since he got his SERF certification, using fewer pesticides has meant thank-you letters from satisfied customers. Many include a snapshot of themselves standing aside their bedecked tree. “Thank you for our beautiful Christmas tree. It is full and lush and still moist after three weeks!” wrote a happy customer last Christmas. “Thank you for being a great steward of the forest.”