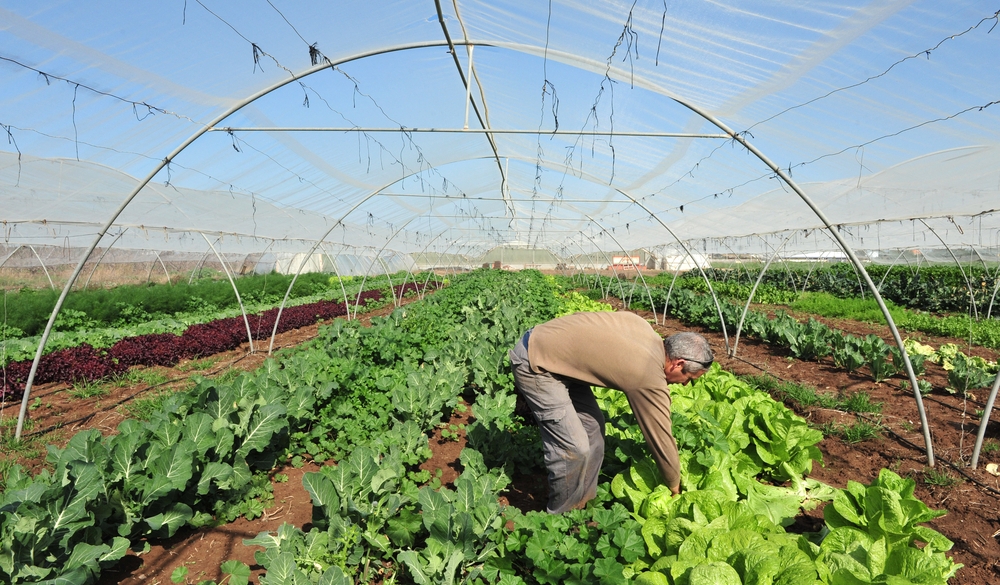 Industrial agriculture has huge, unsustainable impacts on our environment. And while organic and other ecologically based farming systems (agroecology) have huge benefits, some have suggested that it will never produce enough food. Production is only one of the challenges for food security. But, according to new research, even by this measure, critics seem to have substantially underestimated the productivity of organic farming.

I want to point out that, despite the fact that we currently produce more than enough crops to feed our global population, around a billion people are hungry around the globe. And, in the meantime, we waste between 30 to 40 percent of the food we produce. In other words, crop productivity is only one piece of the food security puzzle. Food sovereignty is another important one.

That said, the U.C. Berkeley research [PDF], published today in the journal Proceedings of the Royal Society of London, makes a strong case that organic farming can play an important, and growing, role in “feeding the world.” The study taps into a larger set of data and uses refined statistical methods not applied to previous research that analyzed the combined results of published studies*.

Previous, commonly cited research from 2012 found that, on average, organic methods produce about 25 percent less than conventional ones overall, and some as little as 12 to 13 percent. Now, the researchers have found that some farming practices actually boost organic productivity, so that it is only about 8 or 9 percent short of conventional farming methods. The researchers also found that “there were no significant differences in organic and conventional yields for leguminous crops, such as beans, peas and lentils, for instance.”

“This paper sets the record straight on the comparison between organic and conventional agriculture,” said the study’s senior author, Claire Kremen, professor of environmental science, policy and management and co-director of the Berkeley Food Institute in a statement.

But here’s what really interests me: The scientists looked at organic and agroecological methods such as long crop rotations (alternating crops year-to-year) and polyculture (growing several crop species together in one field) and found they yielded much better results than their bare-bones organic counterparts.

The new study draws an important distinction between organic systems using long crop rotations and other, bare-minimum organic system, which may resemble industrial monocultures except for the prohibition of synthetic pesticides and fertilizers.

Simply eliminating pesticides does not make a farming system agroecological and many organic farmers recognize this. In fact, when this stripped down organic farming is compared to conventional farming, its yields are about 19 percent lower. Bare-bones organic practices provide a floor of prohibitions that reduce harm compared to conventional agriculture. But the implementation of ecologically based practices like crop rotations is critical as we move forward.

Organic Can Do Even Better

The new paper also recognizes several other important ways that we can reduce the “yield gap” between organic and conventional, industrial farming.

First, the large majority of agriculture research has been devoted to improving the productivity of crops grown industrially. In fact, only a small percentage of the U.S. Department of Agriculture’s (USDA) research budget is devoted to sustainable agriculture improvement, according to research cited in the new paper. The results are easy to see. For example, conventionally produced corn yield has increased by six- or seven-fold since the 1930s, much of it due to research in breeding and agronomy for industrial systems.

When the huge efforts to improve the productivity of a few grain and other commodity crops is accounted for, the yield gap between organic and conventional may be further reduced. This is in part because there is a bias—i.e., more available studies—toward grain crops, compared to other crops such as fruits, vegetables, and nuts. The yield gap was larger for grain crops than the other crops and that’s precisely where the research disparity to improve them has been greatest.

The new paper discusses ways to further reduce this gap through research. One opportunity to do this is to breed crops specifically adapted to organic systems, crops that would, say, use organic sources of nutrients more efficiently. Another is to breed crops to suppress weeds without herbicides, since the larger yield differences between organic and conventional grain production have often been attributed to weeds that out-compete the crops.

The use of cover crops–another very powerful and important organic practice with little research behind it—may also increase nitrogen availability .

Plant breeding that is done in universities and other parts of the pubic sector is crucial to produce unpatented crops that make agroecological farming systems more resilient and productive. For example, many crops themselves can be bred to be more competitive with weeds. (As I noted above, weeds are one of the biggest factors in reducing yields, in grain crops in particular.) But plant breeding for industrial agriculture routinely includes the use of herbicides during testing and this masks the ability of some crop varieties to better compete with weeds. In fact, there is evidence [PDF] that suggests industrial crops now do worse when it comes to competing with weeds

Unfortunately, farming research has been moving in the opposite direction, letting the private seed companies displace public-sector breeders and the development of public crop varieties. According to an important new assessment of public breeding, the number of crop breeders in the U.S. has fallen by about a third in the past two decades. This leaves the role of “crop improvement” in the hands of industry that is simply not interested in breeding for agroecological farming systems.

The new U.C. Berkeley research is encouraging. And given the disparity of efforts devoted to conventional agriculture, it is surprising that the yield gap is as small as it is. It also suggests that by recognizing the opportunities provided by organic farming, we might be able to reverse current misplaced priorities and move toward a resilient, ecologically sound, and highly productive approach to farming.

* The new paper found that the main problem with the previous research was the use of statistical methods that gave too much weight to some studies by counting different parts (replicates) as if they were separate experiments. This violates a core assumption in statistics that each study must be independent of the others to be counted as separate.