Bringing Back the Grange, the Farmer's Gathering Place | Civil Eats

Bringing Back the Grange, the Farmer’s Gathering Place

I grew up visiting the local grange in the small town of Los Olivos, California. The lawn outside was always abuzz with activity. Picnic tables were laden with potlucks, babies lounged on blankets, and streamers were flying high. It was the place where everything in our town happened, at least that’s how it always seemed to me. We went to the grange to see films, attend dances, and sit through my parents’ boring grownup meetings. There was a close-knit spirit of support, collaboration, and family that I rarely see anymore.

Several decades later, the Greenhorns, a group that is tireless in its efforts to promote the young farmer movement, is hoping to bring attention back to those community-centric gathering spaces with their next project, the Grange Future Tour.

The concept of the grange came about in the late 1800s, quickly gaining membership among farmers hungry for social connection and political power and interested in creating a political, social, and cultural outlet. When the Civil War ended, soldiers returned to their roles as farmers, causing crop prices to crash.

The farm crisis prompted Oliver Kelly, a clerk for the US Bureau of Agriculture and former Minnesota farmer, to envision an organization that could serve this community through educational and economic support. Kelly’s niece, Caroline Hall, was a strong woman’s rights advocate and convinced him to set up the grange with full female inclusion from the very beginning, despite the heated political statement that it would make. The first grange was founded in Fredonia, New York in 1867 with the following mission:

To develop a better and higher manhood and womanhood among ourselves. To enhance the comforts and attractions of our homes and to strengthen our attachment to our pursuits. To foster mutual understanding and cooperation. To maintain inviolate our laws and to emulate each other in labor, to hasten the good time coming. To reduce our expenses, both individual and corporate. To buy less and produce more, in order to make our farms self-sustaining…

The multi-faceted platform of the grange tied together many themes that people were concerned about after the war, including the hardship felt on family farms due to government subsidies supporting railroad development instead of crops. In many ways, the grange movement was responding to a time not unlike our own.

“The grange held a discourse during a time of transition, when an agrarian, pioneer economy was confronted by increased concentration, industrialization and consolidation of agribusiness,” says Greenhorns Director, Severine von Tscharner Fleming. “Our generation was born into a globalized economy, brought up on the Internet … Farming is direct action at the very foundation of our economy for those focused in rebuilding local and regional food systems, ensuring food security, restoring soil health and habitat, and reclaiming the local economy. This is a multi-generational project, it is going to take all of us to pull it off.”

The Greenhorns’ Grange tour will combine a history lesson (complete with artifacts), with entertainment and education. The tour will travel from Mendocino County down to San Diego and will pull from a network of participants. The Grange Farm School was an apt partner for the kickoff event on December 4 at the Little Lake Grange in Willits.

The exhibit includes Bread and Puppet, Beehive Collective, Rural Academy Theater’s horse powered puppet show, as well as artwork from the Hudson Valley Seed Library, and will continue down the coast for the next two months. 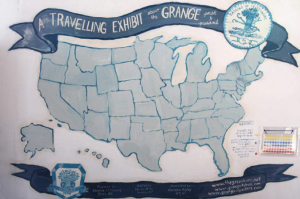 “It’s an interactive, multi-media, low-tech history-swap session. Our major goal is to increase the blood-flow and information-flow between the generations and to connect the deep future with a history still remembered by grey-haired Grangers,” says Fleming.

If you can’t make it to any of the tour stops, there is a thorough micro-exhibit online, which features much of what will be on display, including an archive of grange songs and radio recordings. The immediate goal of this tour “is to recruit 100 new members for California Grange and to demonstrate our delight in an institution so perfectly suited to the moment we’re in now,” says Fleming.

But, ultimately, the Grange Future Tour is also meant to reinvigorate these gathering spaces that already exist and should be enjoyed. “These granges offer a logical venue for local organizing, a grand tradition of political activism, and a cultural center,” Fleming says. “We hope that the grange–a hospitality center, information center, kinship center, and 6-burnered commercial kitchen sitting primly in the small towns across the country–can be a way into the work ahead.”