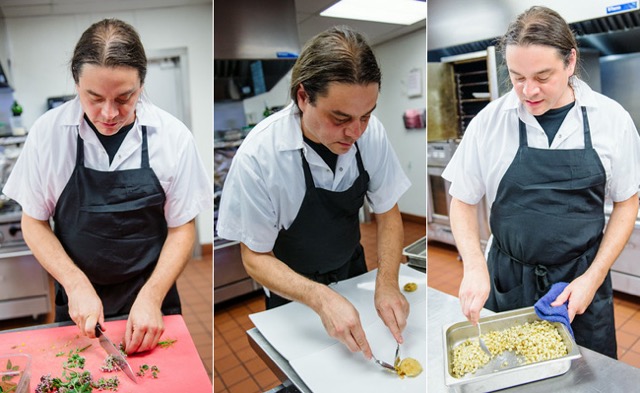 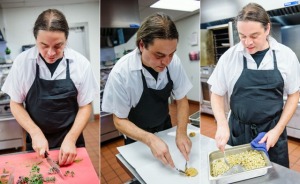 Chef Sean Sherman grew up Ogallala Sioux on the Pine Ridge Reservation in South Dakota. After working his way up through a number of kitchens in Minneapolis, Minnesota, Sherman decided he needed to strike out on his own. In April, he launched his event catering business as “The Sioux Chef.” And he’s working on a restaurant of the same name.

Sherman offers his customers “pre-colonization” cuisine, a term used by Chef Nephi Craig, who founded the Native American Culinary Association, and writes at the blog Decolonial Food for Thought. With media coverage from sources like NPR and Al Jazeera, Sherman’s unusual approach is earning him accolades and bringing in the customers. But getting here hasn’t been easy.

“I quickly learned that there wasn’t much information out there, so I had to devise my own learning system,” says Sherman. First, he needed to expand his understanding of wild foods and to do that he needed to comprehend ethnobotany. “The animals are easy. Anybody can figure out what animals are from the region. The bigger study was understanding which plants were used,” he recalls. 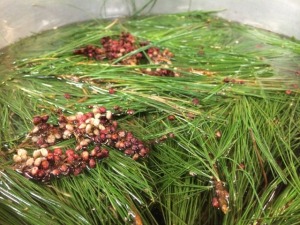 Sherman took a deep dive into oral histories with members his tribe, used his own recollections growing up on Pine Ridge, and poured over dusty first contact accounts written from the European perspective.

“I found that it boiled down what was in Native American food pantries at the time. That started me to understand not only wild foods–but how foods are farmed and how they were set up to last long winters,” he says.

Come spring, tribes across the Great Plains would break the monotony of what they ate during the winter by foraging wide for wild foods like chokecherries and blueberries. Throughout the summer they would hunt, fish, collect, smoke, and dry foods to last them through wintertime. Otherwise, it was a three months of cold corn mush.

Today, Sherman prepares wild game – like buffalo, turkey and rabbit – with ingredients like cedar and juniper berries. He cooks with sweet potatoes, wild rice, and squash, and he makes stock and teas from things like pine needles, cedar, and maple.

Because Sherman’s take on pre-colonization cuisine is free of all processed foods, it’s also naturally gluten-free. It also doesn’t include dairy, making many of his offerings vegan.

While pre-colonization cuisine takes inspiration from the past, it also has direct parallels to the current local food movement. Sherman works with local growers of duck, geese, and quail. He also utilizes the Red Lake Reservation and their fishery to secure fresh walleye, northern pike, and perch. He says the next step is to source completely from Native American producers.

“It would ideal for me to buy all my buffalo from native ranchers. I already source wild rice and heirloom variety of beans from native growers. Trying to keep these food dollars in native communities is critical,” he says. 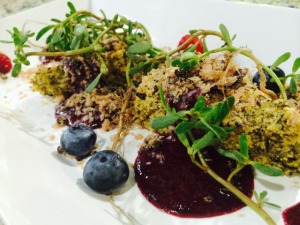 Like on many American Indian reservations, life is often hard for residents of Pine Ridge. Unemployment is high and poverty is widespread. But there are some food producers there have been successful. Lakota Foods is running a profitable popcorn business and the Inter Tribal Buffalo Council is helping coordinate bison herds to give tribes better marketing and bargaining power.

Sherman hopes that exposing more people to Lakota culture through food might ultimately help pave a road out of poverty for his fellow tribe members.

“If my restaurant idea takes off and is successful, that would be a great starting space. It would be great to see one in Rapid City or elsewhere in South Dakota,” he says.

Sherman’s ultimate goal is to revive lost Native American food culture. American Indians were forced to adopt a western diet when the federal government ordered them onto the reservations, and many of the old foods and practices have since disappeared.

“Food really is cultural identity,” he says. “To have a culture that had much of its food history pushed away was a terrible thing.”

In the meantime the Western Diet has wreaked havoc on the health of Native Americans. Sixteen percent of Native Americans suffer from Type II diabetes, for instance. That’s higher than any other ethnic group in the nation. “The impact is pretty obvious across the board. I see it on many reservations. It’s the double hit of adopting a Western diet high in fat, salt and sugar, and then the lack of exercise. We used to hand grind corn for flour in a hollowed out log.”

While cooking pre-colonization food has found Sherman success in the culinary world, he sees plenty of room for others to share the space.

“I want to be clear, I’m not trying to say that what I’m doing is the whole of Native American food. I’m just trying to get to a bigger knowledge past frybread,” Sherman explains. “I’m a student with this food; I’m open to any suggestions or ideas I haven’t heard.”