All the News That’s Fit to Eat: NFL Farmer, Oregon’s Recount, and Chefs Getting Political 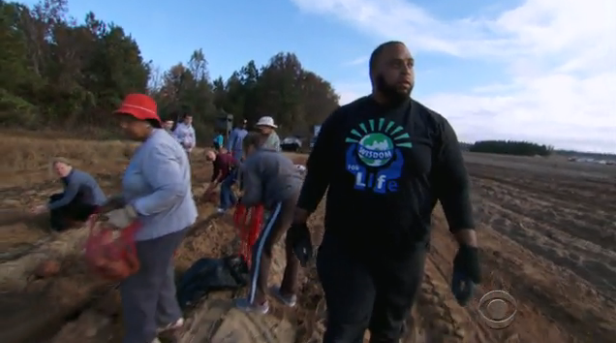 Here are some of the food news highlights from this week.

On Thursday, fast food workers in over 190 cities stood up to demand better wages. These events are the latest action in a two-year campaign to improve working conditions for fast food workers, who rank among the lowest paid workers in the U.S. Many of these workers aren’t part of a union and lack the protection that collective bargaining rights can bestow on workers. While momentum to increase wages on a national scale has been slow to build, voters in five states approved minimum wage hikes in November and the Chicago City Council just voted to increase the city’s minimum wage to $13 an hour by 2019. That’s still short of the fast food workers’ movement’s rallying cry for $15 an hour, which is only the standard in Seattle (in full effect in 2021) and San Francisco (in 2018).

There is broad consensus among public health officials that antibiotic use in animal agriculture is out of control, with President Obama noting the problem earlier this year. But despite deep concerns, the U.S. Food & Drug Administration (FDA) has not limited the use of antibiotics for growth promotion. Instead, it has simply asked drug companies to add labels to their products that state growth promotion is not a permitted use. A new report by Pew has found that this approach leaves a loophole for companies to administer antibiotics to animals for so-called preventive medicine,and that 25 percent of the antibiotics used in meat production recommend the exact same dosages for disease prevention and growth promotion, making it impossible for outsiders to know the difference. All of these 66 antibiotics are deemed important for human health.

The White House Rural Council and Department of Agriculture delivered two rounds of good news to local food advocates this week. First, the Local Foods, Local Places initiative will help communities in 26 locations across the U.S. develop unique plans to build local food projects that meet the specific needs of those communities. A team of experts, from agriculture to marketing, will lend their skills to projects ranging from building local food hubs to creating job training programs in agriculture. Secretary of Agriculture Tom Vilsack also announced $5 million in funding for projects in the Farm to School Program. More than half of the students whose cafeterias will see a boost in local food in their cafeterias live in rural areas.

Country-of-origin-labeling has hit a snag. The World Trade Organization (WTO) recently ruled that COOL violates international fair trade agreements, after Canada and Mexico filed a claim stating that the regulation unfairly targets foreign meat and lowers consumer demand. While the U.S. has filed an appeal on the WTO ruling, there won’t be any action on the issue until January 2015. Secretary of Agriculture Vilsack argues that the problem is a conflict between WTO’s (and Canada’s and Mexico’s) complaints and the parameters of U.S. regulation.

A group of food industry titans have taken Vermont to court over the state’s decision to pass a mandatory GMO labeling law that, if it stands, would go into effect in 2016. The legislation would be the first of its kind in the U.S. and many pro-labeling advocates are watching the case closely as the outcome could make or break similar efforts across the country. Although arguments are set for mid-December, the losing side will likely appeal, pushing the case to higher courts.

6. GMO Labeling Gets a Recount in Oregon (OregonLive)

Measure 92, Oregon’s mandatory GMO labeling law, is holding on in the state after a too-close-to-call election triggered an automatic recount. The initial results put the measure down by just 812 votes out of the nearly 1.5 million cast. So far, Measure 92 has picked up two votes in favor from the reporting counties, though the outcome won’t be officially decided until December 12. Meanwhile, proponents of the measure have argued that the opposition broke state law by hiring out-of-state observers to monitor the ballot counting on election day.

Bad news for parents: A new study from researchers in Texas found that lunches from home are significantly less healthy than those served in school cafeterias. While some students have critiqued school food, they’re much more likely to get their daily dose of veggies on campus than from a lunchbox. The main culprit for this discrepancy? Sugary drinks and desserts, salty snacks and chips, and other junk foods that no longer have a place in cafeterias across the country.

Perhaps this should come as no surprise, given the standard for convenient, pack from home lunches: Lunchables. As Michael Moss, author of Salt Sugar Fat, has pointed out, “Eventually, a line of the trays, appropriately called Maxed Out, was released that had as many as nine grams of saturated fat, or nearly an entire day’s recommended maximum for kids, with up to two-thirds of the max for sodium and 13 teaspoons of sugar.”

As the efforts in Vermont and Oregon show, the fight over GMO labeling has largely been fought at the state level. But, lawmakers have introduced legislation in Congress to require foods containing GMO ingredients to bear a label, no matter where it’s sold. A group of prominent chefs, from Tom Colicchio to Jose Andres, are urging Congress to adopt the law, arguing that as food purveyors, they simply “want to know what they are buying.”

9. 29-Year-Old Leaves NFL and $37 Million Contract to Become a Farmer and Feed the Hungry (Daily Kos)

Former St. Louis Rams player Jason Brown, now 31, cut his contract short by one year, opting instead to buy a 1,000 acre farm in North Carolina. First Fruits Farm aims to feed those in need, though Brown acknowledges that hunger in the area can often outpace supply. Still, the former football star has no plans to quit farming, and will continue to grow sweet potatoes, plums, apples, pears, squash, and cucumbers to give away.

Share the stories that caught your eye in the comments below.