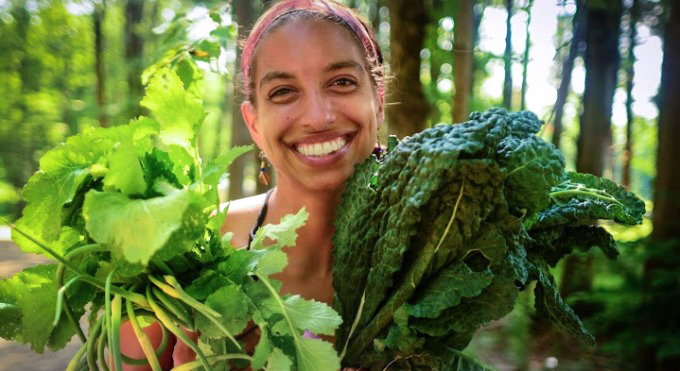 When Leah Penniman posted on Facebook about an upcoming one-week Black and Latino immersion program on her upstate New York farm, it filled up in 24 hours. The program at Soul Fire Farm is designed for young people of color, “to ease them back into relationship with the land,” says Penniman.

This farmer/educator’s life is rooted in a commitment to fighting racism and dismantling what she calls “oppressive structures that misguide our food system.” Penniman wants everyone—regardless of class, color or creed—to have access to fresh, healthful food and an understanding of how to grow their own.

But some African-Americans see “stoop work,” such as picking cotton, harvesting peanuts, and gathering produce as triggering activities that recall slavery and suffering. Where Penniman sees nourishment and abundance, others see what she calls “land-based trauma in our people.” The immersion program, says Penniman, is a “humble attempt to reclaim the right to belong to the land and have the land belong to us.”

Now in its second year, the immersion program brings young aspiring growers and novice farmers from nearby New York City and Boston, as well as further afield, to learn basic sustainable farming practices and whole food preparations. Topics range from soil chemistry to how racism has impacted people of color’s relationship with the land.

“I believe that we mixed up the oppression of racism and named it the land herself and strove to divorce ourselves from her in an effort to get free,” Penniman says, “But without the land we cannot be free.”

A seasoned high school science teacher, Penniman runs Soul Fire Farm with her husband Jonah Vitale-Wolff. The 72-acre property, raises more than 80 varieties of vegetables and around 20 types of fruits, as well as laying hens and meat chickens. It is also certified naturally grown, an alternative to certified organic. The couple, who met in college and have two children, purchased the land in December 2006 and began farming part of it in 2010.

The family deliberately chose Grafton, a small town with a population of around 2,000, 20 miles east of Albany near the Massachusetts border. It is rural but not isolated. They wanted a steady stream of visitors from neighboring cities and the ability to deliver to urban dwellers. But the rural life is not without its challenges, especially in an area with limited agriculture, poor soil, and steep slopes.

“We came to this land with experience reclaiming contaminated urban soils and an interest in applying these techniques to marginal rural land,” she explains. “We have met with great success, after much hard work.” 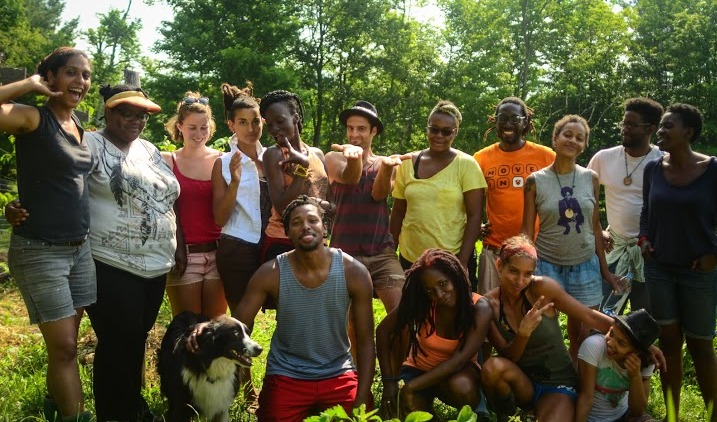 Soul Fire operates a sliding scale CSA; diversity in produce is as important as accessibility for people regardless of income. During the growing season, fruits and vegetables are distributed to around 55 families in low-income urban enclaves in Albany and Troy. In 2015 the farm share will take a break to honor the Jewish agricultural Sabbath known as Shmita. The farm accepts federal government programs intended to help poor people pay for food, such as SNAP and EBT.

In addition to the farming immersion program, Penniman and her husband work with apprentices for longer periods. Hundreds of children also come through the farm each growing season, through established youth programs such as residential foster care or Boys and Girls Clubs. This year, Soul Fire farm also piloted a week-long restorative justice program through the Albany County Courts. Penniman’s goal for this group was simple yet profound: “We want them to leave feeling valuable and as though their contributions matter.”

Farming found Penniman accidentally. Raised by her father in rural Massachusetts, she developed a deep connection with the forests, rocks and water. But it wasn’t until she spent time with her Haitian-American mother in Boston, where she landed a summer job as a farm program participant with The Food Project, that she got a feel for what it’s like working in the dirt. The program, she says, did a great job integrating a “hands-on the land” philosophy, while feeding people in need and developing social change leaders in the community.

Penniman was hooked. She worked on farms for several summers and it quickly became a source of happiness and comfort. “The land is not very interested in race or the petty conflicts of humans,” she says. “I farm primarily because I love the land and believe that she loves me, provides for me, holds me up when I feel unsure.”

As a farmer of color in a largely beige landscape, she is always on the look out for ways to connect with other minority farmers. She is active in the Black Farmers & Urban Growers organization. “I have attended and presented at that conference every year since it began, under the deft leadership of Karen Washington. For me, having predominantly black farming spaces is essential and shores up my reserves to navigate the largely white agriculture world.”

It’s a small but tight community. “I had one African-American woman call me from Boston—cold call—just to make sure I really existed, a black woman farming,” she says. “She wanted to farm and was feeling isolated in the white farming world and needed to know she wasn’t ‘crazy.’”

At the Monterey Bay Aquarium’s Sustainable Food Institute earlier this year, Penniman spoke on a panel with a new generation of farmers. There she addressed the need for intergenerational support among farmers of color.

“I think it is especially important for young folks to connect with elders who are aging out of the profession,” she says. “Many African American farmers from the South are finding themselves without heirs to receive their knowledge and experience.”

At her core, Penniman is always a teacher. In early 2015, the 34-year-old Fulbright scholar, who has taught in Haiti, will head to Oaxaca and Chiapas, Mexico with her family to teach, of course, but also to learn about local farming practices. She plans to write a class curriculum in Spanish and English intended to integrate sustainable food practices into math and science lessons.

“I see my personal mission in life to joyfully and reverently connect youth to the intricate miracle that is this living planet and to their own power as agents of positive change in the community.”