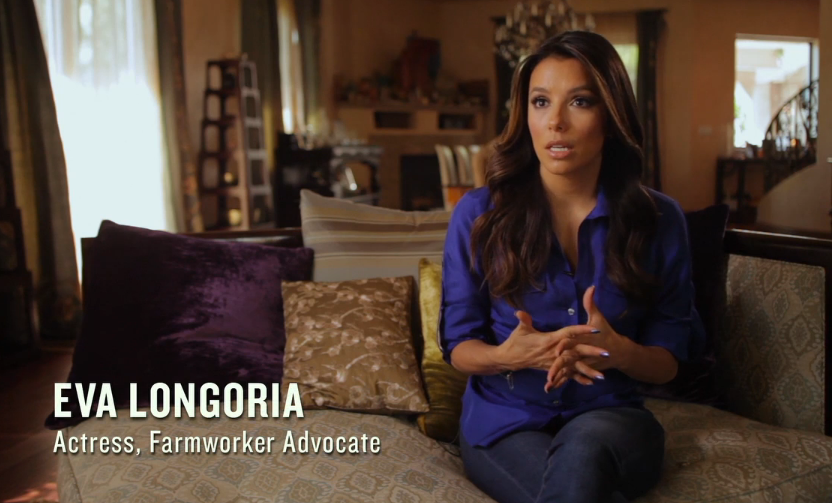 Most people know Eva Longoria as an actress, but she has also become a fierce advocate for our nation’s farmworkers.

Longoria also has cred in both food and politics. She owns Beso, a restaurant which opened in in Hollywood in 2008, and she is an active democrat. As co-chair of President Obama’s fundraising committee, Longoria created the Latino Victory Project, which raises funds for Latino candidates.

Along with Eric Schlosser, Longoria served as the executive producer of Food Chains, a documentary that focuses on the brutal conditions farmworkers face, and shines a light on migrant tomato pickers in Immokalee, Florida. The film, which opened Friday in select theaters, brings the story of the Coalition of Immokalee Workers (CIW), a group at the center of the current struggle in Florida, to a wider audience.

The documentary debuted to positive reviews. The New York Times described it as “emphatic and empathetic,” while The Village Voice recognized that “the film fosters a very human connection to these [tomato] pickers.” We spoke with Longoria over the phone on the eve of Food Chains’ release.

It seems like the issues that migrant farmworkers face in the United States has been an interest of yours for a while. You also produced 2011’s The Harvest [a documentary on agricultural child labor in America]. Where does that interest come from?

I have always been interested in this issue because I eat food. We all eat food. Agriculture is the backbone of our country. We are now at a time where people are so aware of what they eat. People are gluten-free, soy-free, dairy-free, but we forget who makes our food. The human cost of our food isn’t really discussed.

I first heard about Food Chains in 2012 when [director] Sanjay Rawal was raising funds via Kickstarter. At what point in the process did you jump on as executive producer and what led to that decision?

Sanjay had been filming for about a year when he showed me some of the footage. I thought it was such a powerful story. The CIW went on a hunger strike for six days in 2012 and it set up a really great narrative for the film with a middle, beginning, and end. A lot of times, documentaries miss out on the emotion and humanity of the issue, but Food Chains tells a very powerful story.

Food Chains touches on a harrowing topic, but it’s fair to say there are some glimmers of hope, right?

Absolutely. The great thing is that CIW’s Fair Food Program is working. Sure, it is one harvest and one state, but it is totally scalable and applicable. And, it brings economic benefits to any company that adopts it. Farms that are part of the Fair Food Program have lower turnover and people like working there because they are paid and treated fairly. It makes economic sense and that’s the bottom line. It’s not a matter of: “Is the program going to work?” We know it does.

I don’t think people realize the degree of abuse some of these migrant farmworkers have experienced.

Oh, the abuse was awful. It ran the gamut from physical abuse to sexual assault and rape. There were lawsuits [PDF] involving farmworkers who were chained and others who were not paid for work. It was slavery. One thing Food Chains shows is how this abuse has been eradicated from Florida tomato farms. These guys [CIW] are doing it right.

How did the CIW and the Fair Food Program help eradicate these abuses?

Anyone who participates in the Fair Food Program has to sign a Code of Conduct that forbids abuse in the field. There is also an audit of compliance, which I think is the most important part. You think about the fact that we have laws in place that forbid abuse, but often times they are not enforced and there is no oversight. With the Fair Food Program, the Fair Food Standards Council goes out to make sure there is zero tolerance for exploitation.

Do you know of any politicians who are taking this issue seriously?

Tom Harkin [D-Iowa] has done some important work getting child labor out of fields. Congresswoman Lucille Roybal-Allard [D-California] has also done a lot of great work and advocacy on this issue. They are up against some very powerful lobby groups.

Why should the Civil Eats audience watch Food Chains?

This is a human rights issue. The United States has some of the strictest import/export laws. We won’t allow Nike to make T-shirts in sweat shops, but yet we allow this treatment of migrant farmworkers in our country. We are very strict when it comes to other nations, so why not have that same bar in our backyard?

After seeing Food Chains, people will want to know how they can help or at the very least not contribute to the problem.

Yes. The CIW website has information on campaigns, petitions, and letters you can print out and give to your grocers and fast food chains [you can also email CIW to request a free organizing packet]. The Food Chains website also has a “take action” section with more information. We make it very easy for people to help out.