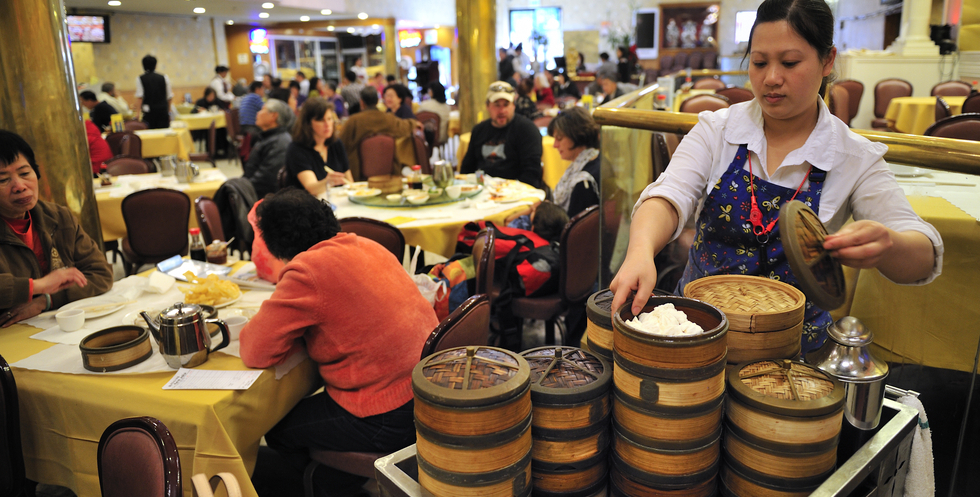 While the nation’s underpaid fast food workers have been making themselves and their demands very visible in recent years, a group of cooks and food servers in one of San Francisco’s most prominent Chinese restaurants have also been quietly charting a course to a better work environment.

Today, a group of employees at Yank Sing joins the Chinese Progressive Association (CPA) and several Bay Area legal groups to announce a historic $4 million dollar settlement and workplace agreement with the restaurant’s owners. Yes, you read that right: $4 million. According to the State Labor Commissioner’s office, this is the largest monetary wage settlement they have helped secure from a restaurant of this size.

The agreement involves back pay for 280 current and past Yank Sing employees, as well as a 5 percent raise for non-tipped workers, holiday pay, and a system to ensure restaurant owners don’t retaliate if they report labor violations. Because many of the workers hope to travel home to visit family in China, the agreement also includes the right to take up to four weeks of approved time off to visit family without losing their jobs.

“My family has lived in San Francisco for over eight years,” said Ms. Wu, a Yank Sing employee whose name has been changed to protect her identity. “In all those years we couldn’t imagine buying a car, taking a trip back to China to visit family, or saving for retirement. In fact we have only gone out of town once, to Los Angeles. Our campaign victory means now I can save for some of those expenses.”

According to CPA, the group is made up mostly of non-English-speaking women, many of whom are the sole breadwinner in their families. What started as a small group of front and back-of-the-house workers built in size to around 100 workers by the Summer of 2013.

The group’s victory is especially profound considering the fact that so many of the people working in America’s kitchens are living on the margins, facing deportation, discrimination, and harassment. Or, in the words of Ms. Wu*, “Low-wage workers are often afraid to speak out.”

According to a recent New Yorker story, “The Kitchen Network,” that detailed the complex relationships between the nation’s Chinese restaurants and “an underground network—supported by employment agencies, immigrant hostels, and expensive asylum lawyers”—there are nearly three times as many of these restaurants as McDonald’s outlets in the U.S., a number that tops 40,000. But few are as high-profile as Yank Sing, which was named “an American Classic” by the James Beard Foundation in 2009 and has made it its mission to “uplift dim sum.”

The restaurant is hardly alone in a food culture that under-values ethnic food and chronically takes food workers for granted, however. In nearby Oakland, a recent study found that one third of restaurant workers can’t afford to put food on their tables. The Economics Policy Institute estimates that the national number is closer to 40 percent.

A 2008 national study of over 4,000 low-wage workers—many of whom were restaurant employees—found that 68 percent had experienced wage theft and 76 percent of those who worked overtime hours had not received proper overtime pay. Meanwhile, 60 percent were underpaid by more than $1 per hour.

So Yank Sing’s owners are making an unusual–and smart–move by choosing to work with their employees rather than against them. Winifred Kao, lead attorney for the workers and litigation director of the Asian Law Caucus has applauded the company for working with the campaign before a lawsuit was filed. “This settlement puts Yank Sing in a different league than its competitors,” she said.

In a statement, Yank Sing co-owner, Henry Chan described the process as a privilege. “We know we made some mistakes in the past, but we are working hard to ensure our employees have these crucial benefits and strive everyday to constantly improve our workplace.”

If today’s settlement is any indication, Chan’s employees will hold him to it.