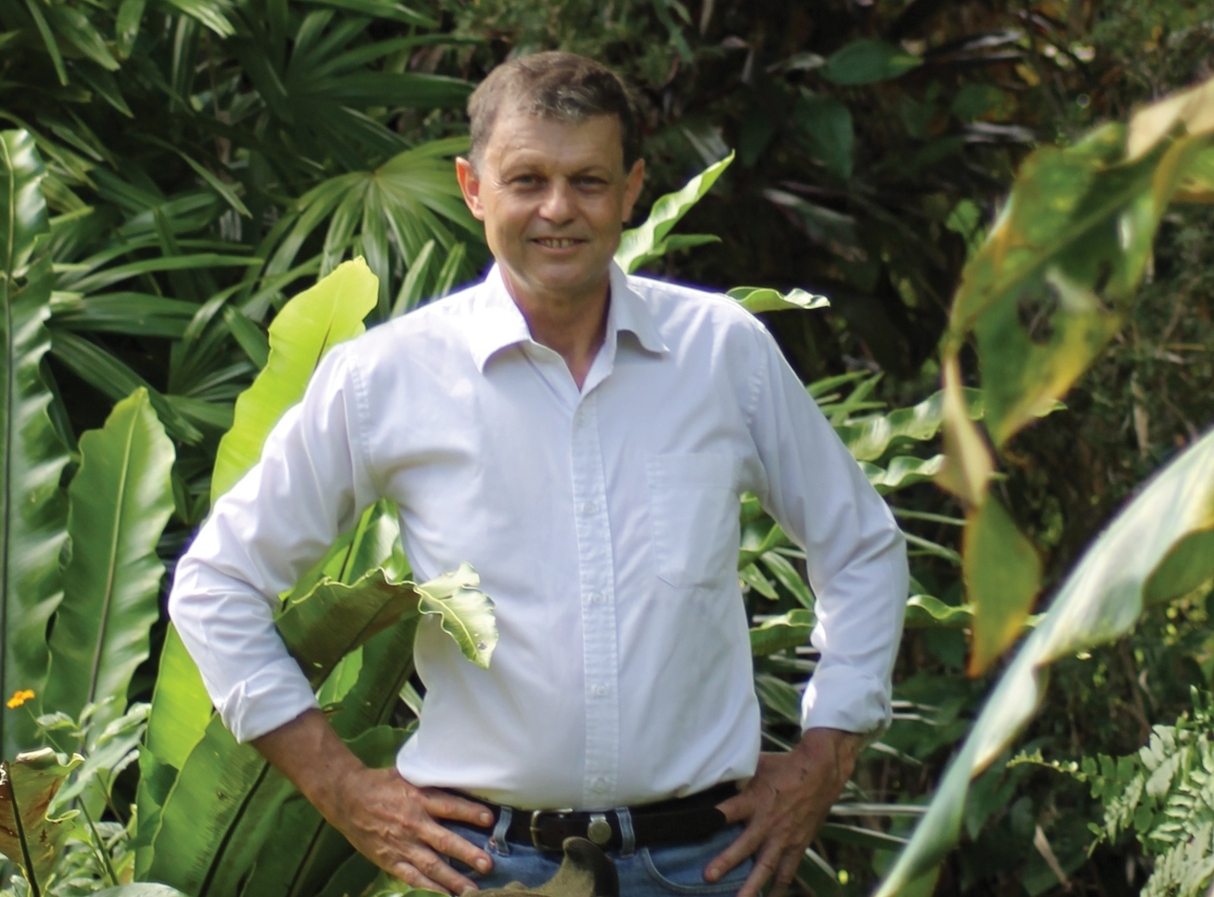 Andre Leu has been an organic farmer in Australia for 40 years. He is also the newly re-elected President of the International Federation of Organic Agricultural Movements (IFOAM), a worldwide network of more than 800 groups in 120 countries. In addition to traveling the world advocating for organic farming, Leu has spent the last few years thinking and writing about pesticides for his new book, The Myth of Safe Pesticides.

I met Leu in October at the IFOAM’s Organic World Congress, held this year in Istanbul, Turkey. The tri-annual event brought together nearly 1,000 farmers, scientists, processors, and other experts for an impressive, inspiring meeting of the minds. When I asked Leu who takes care of his farm while he’s on the road—about 300 days of the year—he said, “It takes care of itself, all I have to do is manage the biodiversity.”

When Leu bought his 150-acre farm 20 years ago in the Daintree region of northern Australia, the land had been degraded, the native tropical rainforest destroyed. He knew most of the property would be worth far more by returning it back to the natural primary forest, so that’s just what he did. Today, 100 acres have been returned to rainforest and he grows more than 100 different species of tropical fruit on the other 50 acres.

“Instead of a reductionist approach,” Leu told me, “we’re looking at how we can use biodiversity to help foster a productive farm.” As the forest has returned, so have keystone species like the duckbilled platypus that now calls his creeks home, the rare Victoria’s Riflebirds, Buff-breasted Paradise Kingfishers and the six foot tall, flightless Cassowary, which nest in his restored tropical rainforest and wetlands.

“They were all rare and threatened species, now they’re back and breeding,” said Leu. “I am showing we can build productive agricultural systems alongside strong, local ecosystems.”

I interview Leu recently over Skype on his way to Kazakhstan.

We’ve come a long way since advertisements in the 1950s were telling us “DDT is good for me!” Thanks in large part to Rachel Carson’s 1962 wakeup call, Silent Spring, we banned DDT in the U.S. in 1972. Are there other toxic chemicals we should be worrying about?

Most people don’t realize that the number of pesticides and the total tons used in farming have actually increased exponentially since Carson wrote Silent Spring. Bird, bee, and butterfly species continue to decline. At the same time there have been increases in huge impacts on pollinators and cancers, degenerative diseases, reproductive problems, behavioral disorders, and numerous other diseases in humans. Hundreds of scientific studies show that these are linked to pesticide and other chemical residues. Many of the new pesticides are just as pervasive as the few pesticides that have been banned; hundreds of chemical and pesticide residues can be found in the tissues of all living species, including humans. The Environmental Working Group has found as many as 232 chemicals, including pesticides, in the placental cord blood of newborn babies in the U.S. Sadly, the problem is far worse now than at any time in history.

In the U.S., many articles have come out recently reporting that studies show organic food isn’t any healthier than food grown using chemical pesticides. You have an international perspective and have your finger on the scientific pulse. What’s your response?

Consider the latest study by Newcastle University, based on a systemic review and analysis of 343 scientific papers, which found that organic foods do have significantly higher levels of beneficial antioxidants as well and lower levels of heavy metals—especially cadmium—and significantly lower residue levels of synthetic toxic pesticides.

The problem is the mainstream media doesn’t question the mantra that the current residue levels of the cocktails of chemicals and pesticides in our food are safe. They’re ignoring hundreds of published scientific studies that show that they are linked to many of the diseases and behavioral problems that are increasing today.

By 2050, we’re told we will need to feed 9 billion people and some say we’ll need high-yielding, industrial techniques to meet that global demand. Do you think organic agriculture has the potential to feed the world?

A critical area where research is showing higher yields for organic systems is in traditional smallholder farming systems. The majority of the world’s undernourished people are farmers or landless laborers who do not produce enough food or income to feed their families. Given that, the only logical way to feed the world is by increasing the production of the smallholders who produce vast majority of the world’s food. Significant yield increases can be achieved by teaching smallholder to do things like recycling organic matter, using water efficiently, and promoting biodiversity as a way to improve pest and disease control without chemicals.

All this works. In one study of 114 agricultural projects in 24 African countries covering 2 million hectares and 1.9 million farmers, organic practices increased yields from 54 to 176 percent. Meanwhile, despite the introduction of chemical agriculture in Africa, food production per person is 10 percent lower now than it was in the 1960s.

This all sounds so exciting, so possible, and yet certified organic agriculture was only practiced on 0.87 percent of the world’s farmland in 2012. Why don’t we see organic practices embraced by more farmers?

Organic is the fastest growing agricultural production system in the world, despite the fact that most governments, research universities, and institutions ignore it. One of the main reasons for the slow uptake is that research in organic systems has been largely ignored. Fifty-two billion dollars is spent annually on agriculture research worldwide, but less than 0.4 percent is spent on organic farming systems.

Compare the small yield difference achieved with trillions of dollars and thousands of researchers to what organic farmers have achieved when left largely to their own devices and I’d argue that conventional agriculture has been a very poor use of valuable funds. Also given that the new research into organic systems is starting to show very impressive increases in yields, organic agriculture is a far better use of research dollars.

Is there one place in the world that you think they’re getting organic farming right? What can the rest of us can learn from them?

In Tigray, Ethiopia, the Institute of Sustainable Development has been working with farmers to restore local ecology and learn practices like composting and using biogas digesters. Farmers in this network are re-vegetating marginal areas—like gullies, slopes, and field borders—and sustainably harvesting the biomass. This has provided a steady source of nutrients helping build soil fertility and replacing nutrients lost when crops are taken off the farm. Farmers are also learning how to plant deep-rooted legumes for nitrogen production, taller species for windbreaks, and a variety of crops to attract beneficial pests.

The farmers have also been encouraged to use seeds of their own landraces, developed over millennia to be adapted to the local climate, soils, and pests. These farmer-bred varieties produced high yields under organic conditions. The major advantage of this system is that the seeds and the compost are sourced locally at no or little cost to the farmers, whereas the seeds and synthetic chemical inputs in the conventional system have to be purchased. In just a few years, they’ve seen more than 100 percent increases in yields and higher income for farmers.