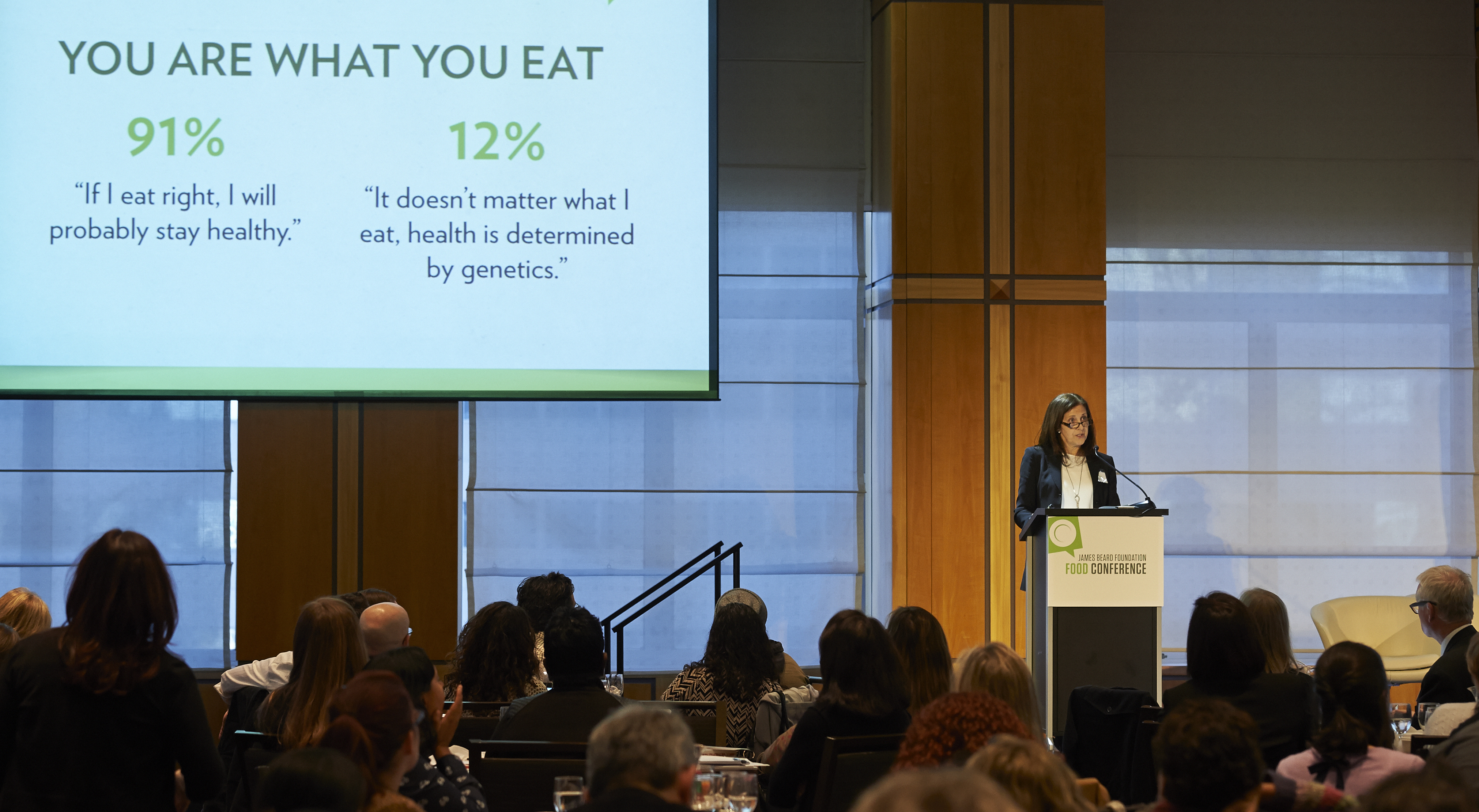 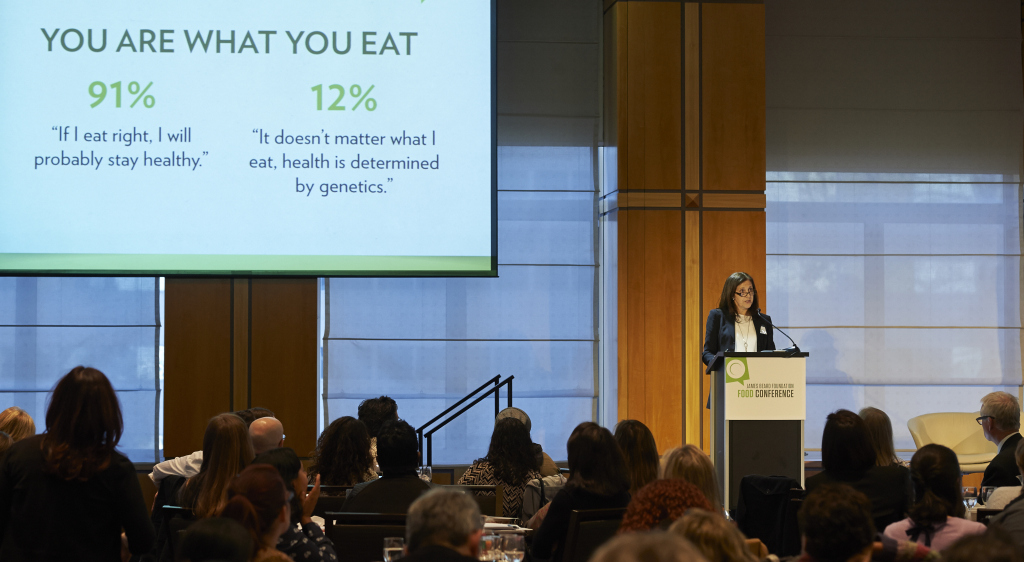 Forget about exploding airbags. America’s exploding waistlines have us on a collision course, literally, with food-induced fatalities. Our crash test dummies just gained 106 pounds overnight, after studies found that most cars’ safety features don’t properly fit larger Americans, putting them at much greater risk of dying in car crashes.

Stories like this presumably lend new urgency to conferences like the one the James Beard Foundation hosted in New York City this week. Entitled “Health and Food: Is Better Food The Prescription For A Healthier America?,” the gathering brought all the usual suspects together to “make us think deeply about our values and the decisions we make about food.”

What comes after the deep thinking? After a day and a half of striving to connect the dots between health, nutrition, commerce, culture, politics, policy, inequality, and ecology, the conference unwittingly wandered into the murky terrain of Donald Rumsfeld’s “known knowns, unknown knowns, and unknown unknowns.”

1. Nutritional wisdom hasn’t really changed in the past 50 years, as both New York University nutrition professor Marion Nestle and New York Times columnist and author Mark Bittman (one of this year’s leadership honorees) pointed out. What has changed is the proliferation of processed food, the Paul Bunyon-esque portions, the loss of culinary know-how, and the shameful targeting of children and low-income communities by marketers. 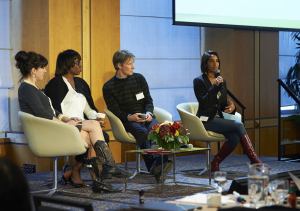 As Bittman pointed out, food is supposed to be nutritious by definition. “A big chunk of what is called food could more accurately be called poison,” he told the crowd. “Real food does not make you sick.”

2. We’re eating too much of the bad stuff and not getting enough of our three agricultural amigos: fruits, vegetables, and whole grains. Most of us don’t get enough exercise, either. As Dr. Ezekiel Emanuel observed in his keynote speech, inertia has its own kind of momentum. Habits are hard to change.

3. Food manufacturers intentionally formulate their unhealthy foods and beverages to make us crave and over-consume them. Factor that in and “personal responsibility” starts to sound like a sick joke. “Our palates have been destroyed,” Laurie David, the executive producer of “Fed Up,” noted. David fumed over the food industry’s willingness to knowingly undermine the health of the nation’s kids, saying “It’s not fair, it’s not a level playing field.”

In low-income communities inundated with cheap junk food, it’s more like a minefield. The young poets from the Bay Area-based Bigger Picture Campaign, a collaboration between the non-profit group Youth Speaks and the UCSF Department of Medicine’s Center for Vulnerable Populations, received a standing ovation from the crowd with their vivid, eloquent condemnations of a food chain that preys on inner-city residents.

At the James Beard Foundation leadership awards dinner held in conjunction with the conference, Oakland-based food justice activist and honoree Navina Khanna noted that while her city has a reputation for being plagued by violent crime, diet-related chronic disease remains the leading cause of death in low-income neighborhoods. 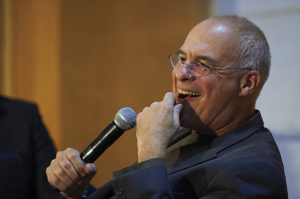 If there was a consensus among the “thought leaders spanning the culinary, medical, agriculture, and arts communities” in attendance, it could best be summed up by the words of another honoree, Ben Burkett, president of The National Family Farm Coalition. “Every human being on the face of the earth is entitled to clean food, fresh air, and fresh water.”

Ah, but how to achieve that laudable goal?

Here come the things that we know we don’t know:

1. Author and journalist (and also one of this year’s honorees) Michael Pollan asked: Can we fix our food and agricultural policies so that our federal agencies aren’t working at cross-purposes, simultaneously promoting healthy eating habits and unhealthy foods? Does processed food have to be so unhealthy?

3. Nestle asked: How can we teach the American public that larger portions have more calories?

4. A panel on “The Ubiquity of Sweeteners” also made it clear that most of us have no idea how much sugar we can safely eat in a day without destroying the mitochondria in our digestive tract. How many people have even heard of mitochondria?

5. Another panel, “Beyond Hospital Meals: Food and Healthcare Collaborations,” discussed the fact that, thanks to the Affordable Care Act, the health industry now has to insure everyone, regardless of how sick they are. This shift has made the industry much more motivated to prevent diet-related diseases through such innovative practices as prescriptions for fruits and vegetables. Doesn’t this prove that government can be a force for good? Why isn’t our media trumpeting the achievements of groundbreaking initiatives such as Health Bucks, Wholesome Wave and The Goldring Center for Culinary Medicine at Tulane University?

1. Nick Saul, the president and CEO of Community Food Centres Canada, noted during a panel entitled “Food, Health and Place: Why Equity Matters” that we “sometimes don’t recognize how poor people are. Good food is not an incidental.” 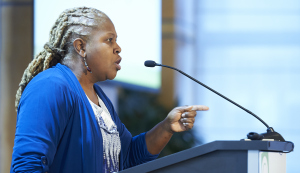 2. But how do we bring it to everyone in this era of ever-widening inequality? Urban ag pioneer and activist Karen Washington, another one of this year’s leadership honorees, had her own prescription. “Come into my neighborhood to work side by side with me, to share your resources and your help. This is what we need in lower income neighborhoods and neighborhoods of color. I want to change the paradigm from a hand-out to a hand in.”

Ultimately, the question “Is Better Food the Prescription for a Healthier America?” seemed like a moot point. As Bittman pointed out, “You can’t change food in the U.S. without changing almost everything else.” It’s time to move past the “thinking deeply” phase and decide what each of us can do to help make that happen.