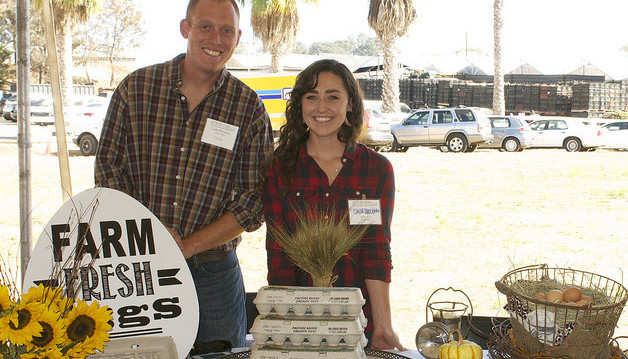 On a recent Friday outside San Diego, California, 26 farmers and eight food distributors set up tables at a local ranch. Representatives from dozens of area school districts (plus a few folks from universities, hospitals, restaurants, grocers, senior centers, and preschools) shuffled from booth to booth, tasting growers’ products, shaking hands, and hashing out potential business deals. When asked how he’d done at the end of the day, Colin Bruce, salesman for the award-winning hydroponic farm Go Green Agriculture, pulled a wallet-sized stack of business cards from his pocket and fanned them out. “This is a unique event,” he said.

The “Let’s Go Local!” produce showcase was sponsored by the San Diego County Farm to School Taskforce, a project of a local obesity prevention program. The event was designed to make possible what many farms and institutional buyers have trouble navigating on their own—conversations that lead to sales. Call it speed-dating for farmers and institutions in a place where the farm to school movement has officially taken off.

Nationally, an estimated 44 percent of school districts are participating in farm to school programs. In California, that number climbs to 56 percent. And in San Diego County, 75 percent [PDF] of districts that responded to a countywide survey said they’re conducting farm to school activities.

The meet-and-greet event—now in its second year—might be partly responsible for that success. “Farmers and institutional food service do not speak the same language and the best way to get them to understand each other … is through ‘get to know each other’ events,” said Anupama Joshi, Executive Director and Co-Founder of the National Farm to School Network.

For growers, who don’t always know how to start working with schools, it’s a huge help. Schools’ delivery windows are limited. They need proactive, advanced communication when product availability changes. Many need help processing produce before it’s offered in lunch lines or on salad bars. And schools’ obligation to provide consistent caloric value to students means that a single large district can clean out a farm’s products in a specific size range—mid-sized oranges, for example.

Jared Bray of Stehly Farms Organics put it succinctly: “We have to be able to adapt. Every district’s needs are different.”

Perhaps most challenging of all, school districts have limited budgets. When the market for oranges is tight, the $8-per-box offer from schools simply cannot compete with retailers’ ability to pay Bray up to $15. They have to find other ways to collaborate. “We’re a business. We’re in this to make money, just like anyone else,” he said.

Despite all this, every farmer I spoke with wanted to work directly with schools. For Bray, schools “offer consistency, so we can be programmed out for months.” In other words, the farm knows what to grow, when to harvest, and who will buy their product. 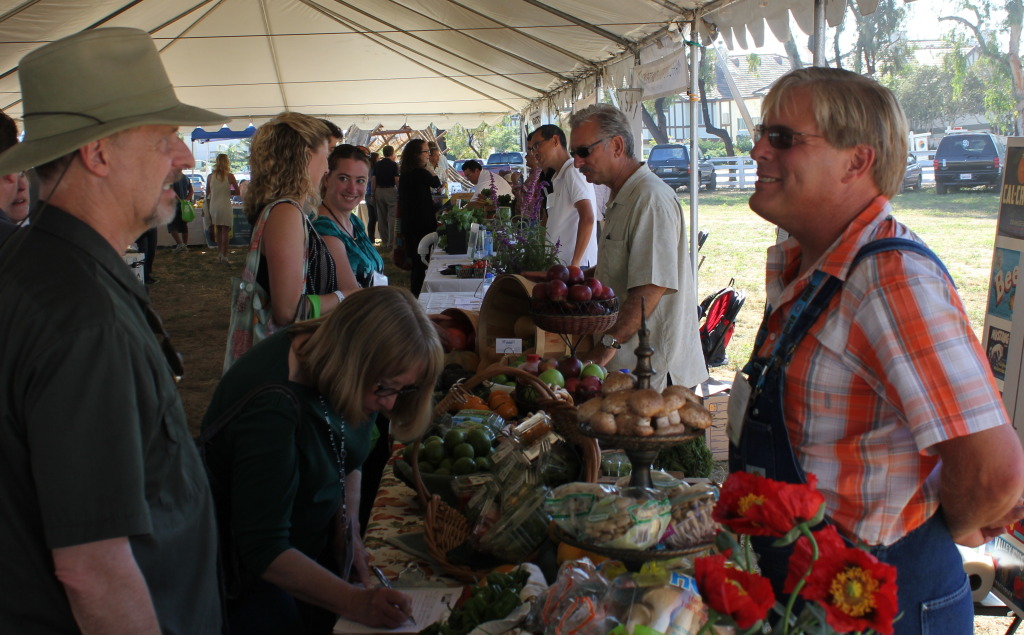 At the “Let’s Go Local!” event, Arturo Gonzales of the family-run start-up Purple Fish Organics was excited about the consistency, too—and the income. “There’s a lot of potential. There’s a lot of money to be made,” he said eagerly. “I’m trying to build more greenhouses.” And Yadira Meza of Sage Mountain Farm said she wants her farm’s organic produce in cafeterias because it will build a market for the other side of her business—community supported agriculture (CSA) boxes. If her produce isn’t on lunch trays, she’s sure it will be Sunkist or Del Monte building brand loyalty among the next generation of eaters. The fact that farmers’ participation in the showcase nearly tripled from nine growers in 2013 to 26 growers in 2014 is further proof that relationships with schools are worth jumping through a few hoops.

Sure enough, by late afternoon on the day of the event, farmers and schools’ shared enthusiasm generated new partnerships. Neff Ranch, which bills itself as one of the last orange groves in Orange County, had promised San Dieguito high schools that they’d consider repackaging their 16-ounce fresh-squeezed orange juice into 8-ounce or 4-ounce containers for younger consumers. The owner and head chef at Carnitas’ Snack Shack had an egg meeting on the books with Eben-Haezer Poultry Ranch and said he planned to purchase Go Green Agriculture’s hydroponic lettuce.

Anaheim-based distributor Family Tree Produce committed to pushing the reset button on a dormant relationship with Mountain Meadow Mushroom in Escondido—neither could remember why they stopped working together nine years ago. And the food service director for Sweetwater Union High School District said he’d introduce his principals and staff to the idea of local procurement by engaging them in a “cowpool,” purchasing and dividing among them a huge share of grass-fed beef from Eden Tropics.

JuliAnna Arnett, who facilitates the Taskforce and spearheaded the showcase, said, “Nearly every grower, distributor, and institution I spoke to said they got a tangible lead from the event.”

Of course, not every grower at the Showcase was ready for prime time. Yadira Meza of Sage Mountain Farms talked longingly about cutting out the middleman, but seemed ultimately resigned to funneling the farm’s produce through a distributor. Meza admitted, “[Distributors] know what needs to be harvested, and they can move product.” She wasn’t confident she had the time or experience to negotiate workable deals with schools.

Other growers expressed even humbler goals. Eben-Haezer Poultry Ranch wanted to sell to new restaurants. Gary Crouch of Mountain Meadow Mushroom just wanted to “show everybody the diversity of farming. There are a lot of people who came here who didn’t know mushrooms grew in Escondido.”

But progress is progress. And Sadie Sponsler-Clements, formerly of the statewide Community Alliance with Family Farmers and now overseeing a farm to school program in La Mesa-Spring Valley School District, isn’t worried if farm to school takes a little longer to coalesce locally. San Diego’s “slower pace is why we live here … Everyone is committed to changing the food system, even if it takes time.” 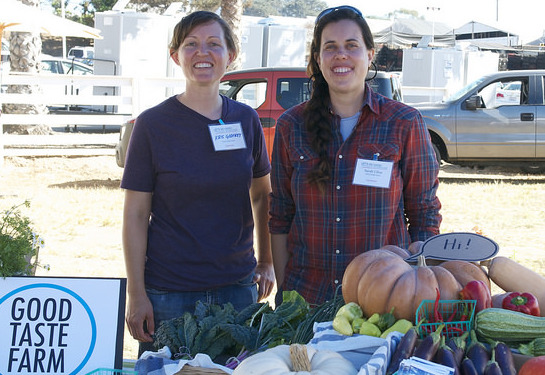 Marie Lawrence is a San Diego-based blogger and freelance writer covering food, farms, social justice, and urban culture. Her writing has been published by Slate and Zócalo Public Square. Follow the birth of her agriculture blog, Growth Trends at @growth_trends. Read more >