A GMO-Free Chef in a Labeling Battleground | Civil Eats

A GMO-Free Chef in a Labeling Battleground 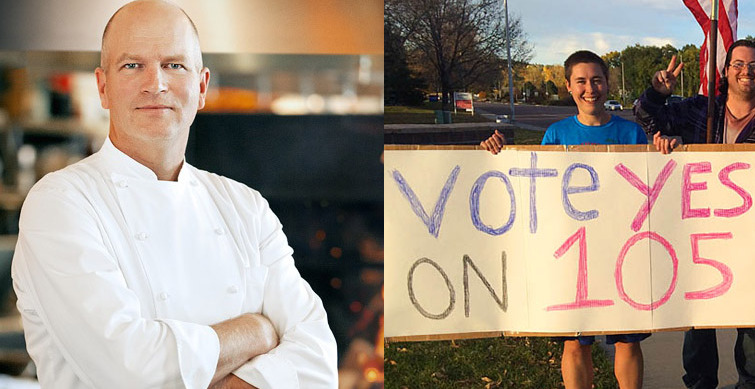 When Bradford Heap decided to make the menus at his two Boulder, Colorado restaurants 100-percent free of genetically modified organisms (GMOs) in June, he did it more out of principle than to please his customers. But he’s had no shortage of support.

Heap’s decision wasn’t sparked by Proposition 105, Colorado’s upcoming ballot initiative to label products that contain GMOs, but it’s not unrelated either. It began earlier this year, when he felt what he describes as a “dull ache that turned into a pronounced desire to find more information.”

After training at the Culinary Institute of America, Heap worked in restaurants in France and Italy, where he became enamored of the way European chefs sourced ingredients locally, seasonally, and as fresh as possible. After returning to the States, he opened Colterra in 2006, where he serves Southern French and Northern Italian cuisines. A few years later, he opened Salt, an American bistro. Both restaurants revolve around the nuclei of local and seasonal ingredients.

Cooking this way had already given him a bias toward small-scale producers, but soon after opening Salt, Heap did some online research and eventually learned about Monsanto’s practice of suing farmers for using their patented GMO seeds—even when those seeds have merely drifted onto a farmer’s field by way of the wind. As the great-great grandson and nephew of a farmer, this made Heap’s blood boil.

He also worried about the safety factor. “It is unethical to ask us to be ‘experiments’ for genetically engineered food that has not been tested or regulated,” Heap told a reporter for a local Boulder blog earlier this year.

At first, he started removing products containing GMOs gradually–tackling oils, sugar, and bottled sauces. Then he stepped up his game after an inquiring reporter from the Boulder Weekly asked about whether he was sourcing pork, chicken, or beef raised on GMO-free feed. He wasn’t.

“It was embarrassing to feel like I was GMO-free, just not when it got too uncomfortable,” Heap says. From that point on, he fully committed himself to finding alternative sources for his meat. This often means buying whole animals that have been pasture-raised and grass-fed or fed with non-GMO grains from sources such as Teton Waters Ranch and Jacob Springs Farm. That was around the time he took out his soda fountain, and replaced Coke, Sprite, and everything else made with high fructose corn syrup and conventional sugar with GMO-free beverages like Boylan’s Sodas, which are sweetened with cane sugar, organic kombucha, and house-made iced tea.

Heap swapped canola oil for locally sourced sunflower oil and conventional sugar (most of which is made with GMO sugar beets) for cane sugar. He removed conventional corn starch, polenta, and vinegars in favor of certified organic and non-GMO alternatives. Today, there isn’t a single ingredient for which he hasn’t been able to find a non-GMO substitute.

So far, the Boulder community appears to be on board with Heap’s philosophy. While the restaurant’s prices may reflect the change in sourcing, people appear to be willing to pay a little more for non-GMO ingredients. Business is up 10 percent over the last year.

Have other chefs followed his lead? Not so far. While many restaurants around the country are committed to using whole foods and organic ingredients—and certified organic restaurants are by nature GMO-free—no one else has explicitly done away with these ingredients for their own sake.

Heap is a strong proponent of Proposition 105 and of labeling in general, but he’s not against GMOs altogether. “There could be a beneficial use for this technology, but we need to understand that we’re not going to feed the world with GMOs,” he says, citing a 2011 UN report entitled Agro-ecology and the Right to Food, which states that small-scale organic farmers—rather than “industrial farming”—are ultimately the solution to world hunger.

The chef also believes that Americans deserve to know what’s in their food. While there is no federal requirement to label GMOs in the U.S., sixty-four countries—including the entire European Union—require labeling. Meanwhile, Vermont, which passed legislation requiring GMO labeling earlier this year and is the only state thus far to do so, is currently being sued by food industry trade groups. The issue is gaining legislative traction in many other states, and will also be on Oregon’s ballot this November.

In Colorado, food corporations and seed companies opposing labeling have spent nearly $10 million to take down Proposition 105. The divisive issue has drawn both staunch opponents and diehard supporters, as well as television ads aplenty. Ads sponsored by Monsanto, for example, claim that Prop. 105 would put local Colorado farmers out of business, a tactic Heap finds “flabbergasting.”

Right to Know Colorado, a grassroots campaign supporting Prop. 105, is hopeful that the initiative will pass in spite of the well-funded opposition. After garnering over 170,000 signatures to get the measure on the ballot, the group has gained support from companies ranging from Whole Foods Market, to Ben & Jerry’s, and Chipotle. Prop. 105 is also backed by a bevy of farmers across the state, as well as the Rocky Mountain Farmers Union.

“We are optimistic and believe the majority of Coloradans want the transparency provided through the labeling of genetically engineered foods,” says Tammi DeVille Merrell, the campaign manager for Right to Know.

If Prop. 105 does pass, Chef Heap admits that it might present challenges for some farmers. For example, products containing sugar made from GMO sugar beets might suffer a decrease in sales after labeling, which could adversely affect the market for Colorado-grown sugarbeets. Others are concerned about logistical hurdles.

James Bertini is the owner of Denver Urban Homesteading, a local foods store and a year-round farmers’ market. While Bertini isn’t a farmer, he does buy crops and products from many local producers in the area and sells their wares on his shelves. And although there are very few genetically engineered foods in the market that do not end up in packaged foods, he worries that he may have to take on labeling some foods himself.

“Prop. 105 would definitely increase our cost. It could be the straw that breaks the camel’s back,” says Bertini. While he isn’t opposed to GMO labeling regulations, he does think it should exempt farmers’ markets and small retailers.

Alison Gannett, the owner of Holy Terror Farm in Paonia, Colorado and the founder of Local Farms First, an online farmers’ market, doesn’t see labeling as a challenge. “Any farmer can tell you in one second if their crop is GMO or not,” Gannett says. She notes that most of the approved GMO crops on the market—like soy, canola, and sugar beets—are used for animal feed or for processed foods.

Meanwhile, a recent study by the Consumers Union indicates that consumers would end up paying $2.30 more a year if labeling were in place.

According to Bradford Heap, going out of his way to source entirely non-GMO ingredients in his restaurant has been “much harder” than it might be with a labeling system in place. But, he adds, he has been “rewarded with a loyal clientele.”

If Proposition 105 passes, other chefs might have an easier time following in his footprints. If not, he says, “I guess I’ll be the Crazy Horse.”

Maya Silver is a writer based in Golden, Colorado, and an editor at DiningOut magazines. She is the co-author of My Parent Has Cancer And It Really Sucks. For more about Maya, visit LivinGenius.com. Read more >