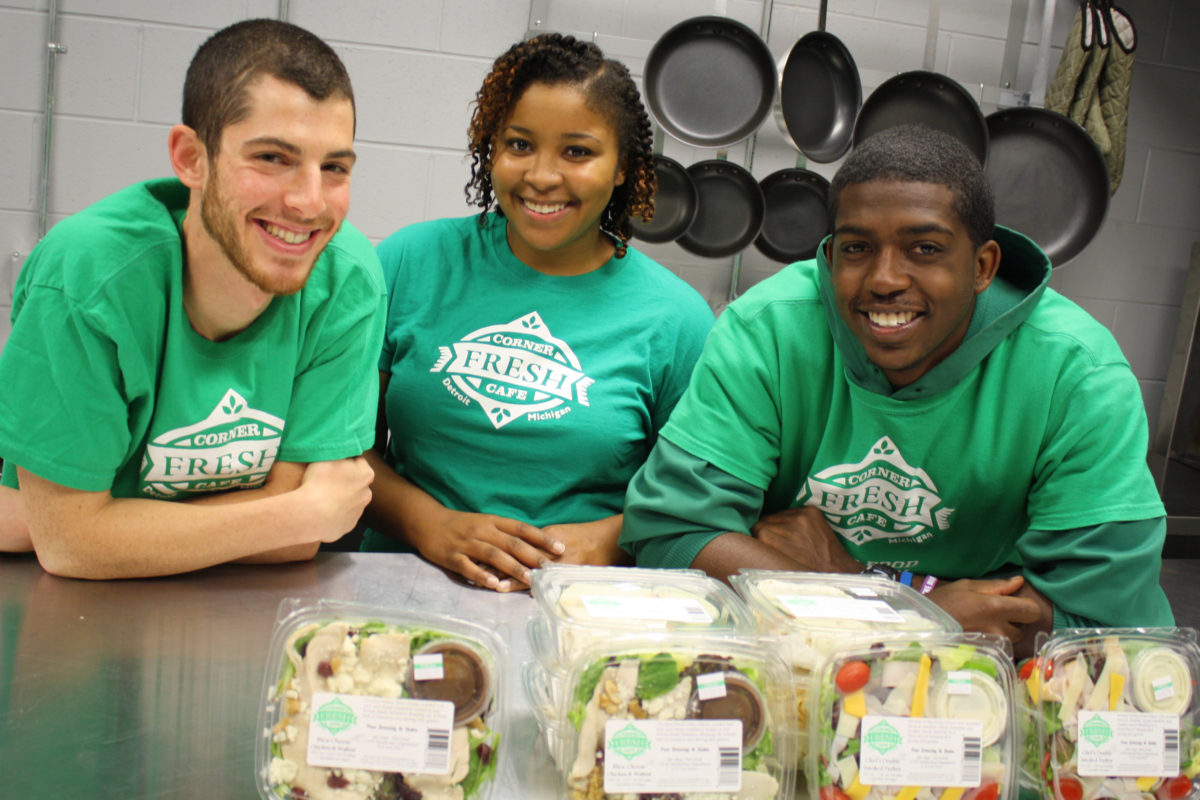 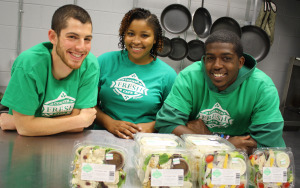 If you’re on the hunt for a fresh, ready-to-eat meal in Detroit, the best place to find it just might surprise you. Take the Sunoco station on Fort Street or the Victory Liquor and Food store on Warren Avenue. Amidst the Hot Cheetos and snack-sized Chips Ahoy cookies, you’ll find a cooler stocked with everything from fresh fruit and yogurt parfaits and spicy feta and hummus wraps to Thai chicken salads made with fresh, green lettuce—not the wilted iceberg you might expect.

The company behind the food might not be what you’d expect either. Fresh Corner Cafe (FCC) is a mission driven food and delivery service with the goal of making healthy food accessible to all Detroiters. To do this, they’ve turned to a most unlikely distribution center—neighborhood convenience stores.

For years, Detroit has been labeled a “food desert,” but that term is misleading. “It’s not that we don’t have grocery stores,” explains Detroit native and FCC co-founder Val Waller. “It’s that people have issues getting to them.”

According to a 2011 report from Data Driven Detroit, there are more than 115 grocery stores within Detroit’s city limits. In the years since that report was published, several high-profile grocery stores have opened stores in the city—including Whole Foods in June 2013 and Meijer in July 2013. But Detroit encompasses 138 square miles, the public transportation is undependable and some neighborhoods are simply not safe for walking. As a result, many Detroiters choose food from the closest of the more than 1,000 corner stores in the city.

“We’re trying to change the idea of what can be available in these spaces,” Waller explains. Initially FCC co-owner Noam Kimelman had to convince the shop owners that his products would sell. But Kimelman and Waller worked hard to build relationships with store owners and won over customers by providing free samples.

The idea for Fresh Corner Cafe came to Kimelman while he was studying at the University of Michigan. While working on his Masters of Health Management and Public Policy, he and his classmates came up with an idea for getting healthier food into urban areas. His first business, Get Fresh Detroit, launched in 2010 and offered for sale packets of food with fresh ingredients to make soup or stir fry. His goal was to make a gas station or convenience store a one-stop shop for fresh food ingredients. Kimelman soon learned that his customers were more interested in ready-to -eat meals, so he changed his business plan to offer pre-made meals. 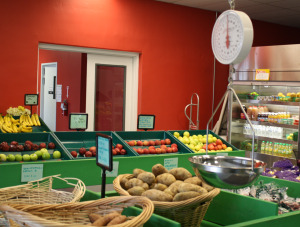 Kimelman recruited Waller, another U of M graduate, to join the company in 2011. Her degree in sociology and work experience in her family’s Detroit pizzeria have fueled her passion for creating an equitable local foodshed. She says access to good food should not be contingent on where someone lives.

Unlike most government interventions, says the Fresh Corner Café website, which “rely on big box retail to address healthy food access and obesity” the company’s goal is to “reduce barriers and uplift existing assets to provide a highly replicable and scalable solution with low capital requirements.”

Targeting convenience stores is an effective way to reach low-income shoppers. Fresh Corner Cafe sells to stores that are all certified to accept food assistance cards, also called Bridge cards. According to Data Driven Detroit, residents of Detroit spend twice as much of their Bridge card money at convenience stores as compared to the rest of Michigan‘s residents.

Fresh Corner Cafe works at a community level. They source fruit from Peaches and Greens, a locally owned produce market, and the wraps and salads come from Lunchtime Detroit, a sandwich shop. The staff lives locally and the drivers come from the communities to which they deliver. FCC delivers meals to 27 locations—including cafes, gas stations, and pharmacies—three times a week.

Currently the sales from the convenience stores do not generate enough revenue to turn a profit, so in order to keep the company sustainable, FCC expanded by placing their own self-serve to-go cafes in several Detroit workplaces. The company provides a fully-stocked refrigerator with a self-pay station and they stock and clean the shelves and handle all financial transactions. These workplace cafes makes it convenient for busy professionals to eat healthy and for businesses to provide fresh food to their employees.

So far, these strategies appear to be working. In August, Kimelman was recognized with a young entrepreneur SCORE award for pioneering the model and the company now employs six people.

Last year FCC sold some 30,000 meals bringing in $200,000 worth of revenue. Those numbers will continue to grow as FCC expands to more stores and offices. According to Waller, FCC plans to open their own certified kitchen, which will give them more control over ingredients and eventually allow them to introduce an organic line. “It is a social injustice for people to not have access to fresh food,” she says. “Detroiters are so used to not having things that they don’t even know how to ask for them.”