So you’re cutting back on steak to lower your cholesterol or your carbon footprint but you don’t want to live on beans and tofu alone. Can you subsist on veggie burgers with the flavor profile of emulsified paper? And should that faux-chicken really have 37 ingredients? What is autolyzed yeast extract and “natural vegan flavor” anyway?

Just 5 percent of Americans are vegetarian and far fewer identify as vegan. But many people are trying to eat lower on the food chain, say, one day a week or before 6pm. And the demand for meatless “meat” appears to be growing; according to one market study, 36 percent of Americans now say they seek it out. Gardein, one of the larger companies making veggie burgers and meat-free chicken, told the Des Moines Register recently that it “expects $100 million in retail sales this year, jumping to almost $1 billion within 15 years.” The company’s products are found in more than 22,000 supermarkets, including Kroger, Target, Whole Foods, and Safeway. Meanwhile, startups like Beyond Meat and Hampton Creek are working to bring products like imitation chicken and eggless mayonnaise to the masses.

Meat substitutes have their fans, but they’ve also caught heat in recent years for being bland, highly processed, and further away from “real, whole food” than many would prefer. This got us wondering: There’s an abundance of local, pasture-raised meat out there for omnivores. Are artisanal, local, and small-batch meat substitutes changing the face of the meatless world in the same way? As it turns out, there are some companies putting out animal-free products that are tasty and sustainable. 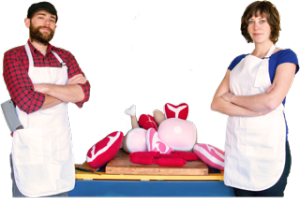 In the mountains of Asheville, North Carolina, Sadrah Schadel and Mike Woliansky are determined to take factory-farmed meat out of dinner. In April 2014, the owners of No Evil Foods started selling seitan-based Italian sausage, roast, and chorizo (seitan is derived from wheat protein). The couple uses all organic spices and flavorings, and use strain of wheat grown in Europe that is also certified non-GMO. The goal is to keep ingredients simple and recognizable. Their tagline: “It isn’t fake meat. It’s real food.”

“I used to think that if something was plant-based and vegetarian it was good for me. But that isn’t true,” says Schadel. “I was seeing a lot of vegetarian mystery meats.”

Schadel started looking for vegetarian solutions that weren’t heavily processed. Six years ago, she came across the ancient Buddhist tradition of mixing wheat proteins with water to mimic the taste and texture of meat. “They wanted their meat-eating guests to feel comfortable at the table,” says Schadel. “We also want to create more options so that people who don’t eat meat and people who do can both be satisfied.”

But making seitan that actually tasted like pork wasn’t easy. Schadel had never eaten meat, and it had been years since Woliansky. Neither felt qualified to know what would appeal to a carnivore.

“We thought about trying meat to see if we had the flavor right, but in the end we didn’t,” says Woliansky. “Instead, we leaned on our friends who are meat eaters and they did a lot of sampling.”

To build their recipes, the couple read online sausage-making forums and meat-focused message boards, studying which spices people used and how fans described the taste. The two hit on something. After being in business for only six months, No Evil Foods is up for a Martha Stewart American Made Award.

“People come up to us at the farmers’ market and say they haven’t had chorizo as good as ours since their grandmother made it,” says Schadel.

Many of the company’s customers are not vegetarians. And Woliasnky and Schadel aren’t in business to talk anyone out of their diet. “We think there is room for both (sustainably raised) meat and seitan. But we can’t ignore the environmental impact that meat has either,” says Woliansky. Over 95 percent of U.S. livestock is raised industrially and it comes with a long rap sheet—from hazardous manure lagoons to antibiotic resistant bacteria. “And then there’s the fact that meat production accounts for at least 14.5 percent of greenhouse gases estimates (The Worldwatch Institute says that number could actually be much higher, closer to 51 percent).”

But the idea behind No Evil Foods isn’t just to give consumers more choices. Woliansky and Schadel want to push vegetarian food to a higher standard as well.

“Judging by the amount of growth I’ve seen in meat alternatives in my lifetime, there will continue to be more options,” says Schadel. “But I hope (the market) grows in ways that aren’t inadvertently doing damage to your health and the planet.” Take soy products, for instance. The demand for soy has led to millions of acres of deforestation in the Amazon and chemical-intensive monoculture farming across the United States. (That said, the majority goes to feed animals, not people).

Fish that Grows on a Vine 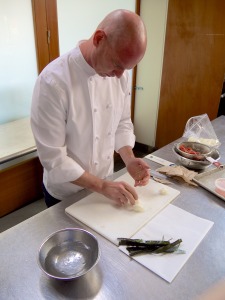 Six years ago, Chef James Corwell had the culinary version of a come-to-Jesus moment in the Tsukiji fish market in Japan. Before it was even time for lunch, he had watched bidders from around the world buy up enough tuna to fill two warehouses the size of football fields in a frenetic turnover that happens at Tsukiji six days a week, all year round.

“I asked myself how the oceans could keep up. And the answer was that they couldn’t,” says Corwell, a certified master chef from the American Culinary Federation.

And he’s right. More than 85 percent of all the world’s fisheries have already been depleted or soon will be. The situation is especially severe for popular fish like tuna. In 1950, the worldwide tuna catch totaled 660,000 tons and most of that went into cans and casseroles. Today, that number has spiked to 7 million tons, largely due to demand at sushi bars.

After Corwell returned from Japan, he spent five years experimenting with tuna alternatives. By gently cooking tomatoes sous vide in a blend of herbs, tamari, rice wine vinegar, and a dash of sugar, Corwell recreated the red-pink jewel “flesh” of tuna. Visually Tomato Sushi looks almost indistinguishable from the real thing. And the taste, if not exactly a match for high-grade tuna, has the umami notes of fish.

Corwell teamed up with Chef Brian Doyle to market Tomato Sushi to grocery stores, Silicon Valley tech campuses, to-go sushi counters, and even hospitals, where doctors don’t want to serve mercury-heavy foods to patients (tuna is at the top of many seafood watch lists for mercury contamination).

“This is not a second-class citizen sushi concoction like avocado and cucumber rolls,” says Corwell.

“You put the word vegan on something and people think it’s disgusting,” says Doyle. “But even people who don’t like tomatoes like tomato sushi.”

Tomato Sushi hopes to raise $25,000 on Kickstarter by October 17 in order to expand the company’s distribution and product line. (There’s talk of an eel roll made with eggplant.) The two founders would like to use some of that money to build relationships with small-scale, local farmers and greenhouse growers who can supply them with organic tomatoes all year long.

Adam Weiss recently joined Tomato Sushi as Creative Director. Among the three men he’s the only vegan, and he says that’s a good thing. “We need more non-vegans making vegan products, not just people who haven’t had meat or fish for 12 years.”

Like Schadel and Woliansky, neither Corwell nor Doyle are trying to make anyone into a vegetarian. But it’s clear they hope to spur conversation. “We want people to think about why this product exists,” says Doyle.