By Cynthia Graber and Nicola Twilley

Editor’s note: The following post comes to you from the creators of Gastropod, the new podcast that looks at food through the lens of science and history.

It’s hard to imagine now, but there was a time before refrigerators, before long-distance trucks and ships. Most people had to survive on food from their immediate surroundings, no matter how poor the soil or challenging the terrain. They couldn’t import apples from New Zealand and potatoes from Peru, or rely on chemical fertilizer to boost their yields.

From within these constraints, communities around the world developed a way of eating that Dan Barber calls “ecosystem cuisines.” Barber, the James Beard-award-winning chef of Blue Hill restaurant and author of the new book The Third Plate, spoke to Gastropod about his conviction that this historically-inspired style of cuisine can be reinvented, with the help of plant-breeders, his fellow chefs, and the latest in flavor science, in order to create a truly sustainable way to eat for the twenty-first century.

Ecosystem cuisines, as Barber explains, survived in often harsh landscapes for hundreds or even thousands of years, because the local farmers cultivated a mutually beneficial community of plants and animals that grew well together, supported soil fertility, and could be combined in ways that still taste utterly fantastic today.

Barber became famous for his farm-to-table cooking—a style of cuisine that prioritizes serving local, seasonal food, and that has become increasingly popular across America as a sustainable, delicious way to eat. But, as he began to understand how ecosystem cuisines incorporated all the ingredients of a healthy landscape, he realized that the typical farm-to-table chef’s approach of only showcasing a region’s very best local products isn’t really sustainable at all. 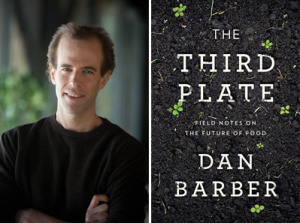 For example, Barber told us that the world-famous jamon iberico de bellota, Spain’s mouth-watering Iberian ham, simply could not exist if the local community didn’t also value, maintain, and consume the entire ecosystem around it. This landscape, a carefully tended combination of grasslands and widely spaced cork and holm oak trees, is called the dehesa in Spanish. As Barber explained, despite being a remote region with poor soils and a dry climate, the Spanish dehesa supports a thriving mix of pigs, sheep, and cows, olives, mushrooms, wild game and herbs, wheat—and people, whose dinner plates traditionally reflect all of the landscape’s products, rather than just its superstar ham.

Inspired by the dehesa, Barber has set himself (and anyone who cooks) an inspiring and intimidating goal: to invent thousands of entirely new cuisines for America—cuisines that include all the edible products of a healthy, ecologically balanced local landscape, and are actually more delicious than a cuisine that only relies a region’s most famous foods.

The first chapter of our conversation with Dan Barber explores the particular environmental and cultural circumstances that helped establish these traditional ecosystem cuisines in the past. But Barber is very clear that he’s not advocating some kind of impossible return to a simpler time. Instead, as we go on to discuss in the episode’s second and third chapters, Barber is working with a variety of scientists at the cutting edge of their fields in his quest for truly great flavor.

In the book, this involves a visit to a futuristic hydrological engineering project in southern Spain, in which the flow of water through a series of 1920s-era canals has been reversed to revive one of Europe’s largest wetlands, creating a perfect habitat for both migrating birds and farm-raised sea bass that Barber describes as among the most delicious fish he has ever tasted. It also involves a series of failures in an innovative attempt to produce ethical foie gras, a bread raised using phytoplankton rather than yeast, and an impassioned argument for increased government support of agricultural research. 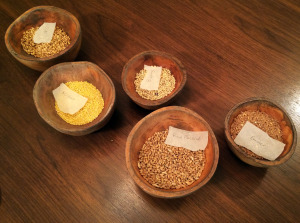 In this Gastropod episode, however, we focus on the science behind two approaches to creating great flavor: soil health and plant breeding. With Barber as our guide, we tease out the complicated and barely understood relationship between a soil’s mineral content and the nutrient density and flavor of the crops it supports, as well as the emerging science of microbe-root relationships and plant health.

Finally, we look at what it takes to breed truly delicious crop varieties. Barber introduces us to new squash developed by Michael Mazourek at Cornell University that has yet to receive a name, but is “so delicious that it blows your mind.” Barber’s latest obsession, however, is a new variety of wheat, specially bred by Steve Jones at the Washington State Research and Extension Center to deliver intense flavor while growing well in the Hudson River valley. It’s called, to his great delight, “Barber wheat.”

Visit gastropod.com to listen to the full episode, or subscribe on iTunes or Stitcher. And keep tuning in every two weeks for a new episode exploring food through the lens of science and history.

Photo captions: (Top) Barber Wheat in the greenhouse (left) and freshly sowed in the fields at Stone Barns Center for Food & Agriculture (right). Photograph via Dan Barber. (Below) Dan Barber showed us grains from Klaas Martens’ farm in upstate New York. After a visit to Martens’ farm to source local wheat, Barber realized he needed to purchase and serve the other crops that Martens was growing in rotation on his fields in order to support the soil that grew the wheat. Photograph by Nicola Twilley.