Beyond The Kibbutz: A Jewish Farm Renaissance | Civil Eats

Beyond The Kibbutz: A Jewish Farm Renaissance

Editor’s note: This is the first in a multipart series about the connections between faith and farming.

Every fall, Paul Dinberg builds a kind of thatch-roofed hut on his 10-acre farm in Ridgefield, Washington. This “sukkah,” a ceremonial structure Jews are commanded to construct and (for the very observant) live in for the holiday of Sukkot, commemorates the Israelites’ 40 years of desert-wandering. But sukkahs also have agricultural roots, possibly harking back to temporary structures ancient Jewish farmers would live in during harvest time. For a modern-day Jewish farmer like Dinberg, that gives Sukkot—which begins at sundown October 8 this year—special meaning. “We observe all the different festivals, but as a family, Sukkot is our favorite,” he says. “What gives me satisfaction is the connection to the agricultural cycle.”

Though many American Jews observe Sukkot, visiting their synagogue’s sukkah or building one in their backyard (or on their fire escape, as many do in urban areas), only a tiny minority can claim such an authentic connection to the holiday. Despite a history as a largely agricultural society, as well as modern traditions such as the kibbutz (a farming-based collective community), it’s safe to say most American Jews are no longer strongly connected to the land: according to a 2013 Pew Research Center survey, 96 percent live in urban or suburban areas.

As interest in farming and food has grown among Americans in general, though, increasing numbers of this thoroughly citified minority are going back to the land—and bringing with them a millenia-old, rich agrarian heritage.

“There’s been an incredible amount of growth over the past 15 years,” says Liz Traison, a program associate at the Jewish sustainability organization Hazon. A study the group released earlier this year found that the annual number of participants in immersive “Jewish Outdoor, Food, and Environmental Education” (JOFEE) programs increased twelvefold between 2000 and 2012. “When people can see where food comes from and feel like they’re part of their community, that’s a powerful and spiritual experience,” Traison says.

The Jewish Environmental Fellowship is one of several farming-focused JOFFE programs that have cropped up in the last decade or so. It brings a cohort of young adults to Adamah, the country’s leading Jewish educational farm, for three months of organic farming and self-cultivation. Fellows bookend days working on the six-acre tract in Falls Village, Connecticut with morning meditation and evening classes on agriculture-related theology.

“It’s an opportunity for folks to reconnect with a culture that has been forcibly removed from any relationship with the land for thousands of years,” says Shamu Sadeh, Adamah’s director. “What does it mean to look at liturgy, or Bible stories, or kosher laws through the eyes of a farmer? It brings that stuff to life in a way you’re not otherwise going to get.” 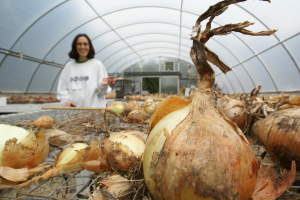 Outside of institutions such as Adamah, there’s growing energy around the concept of Jewish “intentional communities” featuring farming elements. The first-ever Jewish Intentional Communities Conference, put on by Hazon last fall, drew 188 people. Among the attendees were delegates from Israeli kibbutzim—institutions with which no Jewish, agriculture-based intentional community in America can avoid comparison. Indeed, many of the ideals that inspired pioneering “kibbutzniks”—self-reliance, honest work—echo in the contemporary U.S. intentional-community movement.

“There’s still so much to learn in the intentional-community world about the rise and fall of the traditional kibbutz movement in Israel,” Traison says.

Then there are individual Jewish farmers—like Paul Dinberg. After getting laid off from a job with the City of Portland, Oregon, Dinberg decided to leave behind the cubicle farm for, well, an actual farm. (He’d worked summers as a farm worker during grad school.) Part of his motivation, he says, came from the Jewish concept of tikkun olam, or “repairing the world.”

“There’s a social-action part of being a Jew, where you’re supposed to do something good in the world,” Dinberg explains. “Farming allows me to do that—care for the earth, be a partner with God, provide opportunities for people through good food.”

Today, the 51-year-old runs an organic farm and community-supported agriculture (CSA) program just over the Columbia River from Portland. Little Gnome Farm (“little-known”—get it?) operates according to such biodynamic farming methods as planting and harvesting on a lunar calendar—exactly, Dinberg notes, as his ancient Jewish forebears did.

Seated at his beat-up patio table in a John Deere cap and shorts, Dinberg argues that the lessons Jewish scripture offers about agriculture are more relevant than ever as the globe warms. “The Torah,” he says, “lays out how we’re supposed to relate to planet Earth and how if you idolize things like money, you’ll be pushed off the earth that sustains you.”

Dinberg’s not the only new Jewish back-to-lander who has drawn a connection between farming and the Judaic value of humility. Traison observes that Judaism and farming alike teach that “we live in a world we can’t quite control”—and provide their practitioners with a path to help navigate it. Adamah’s Sadeh, too, sees in agriculture a means for Jews (and everyone) to gain a broader, more spiritual perspective. At Adamah, he says, “we’re trying to provide a connection to wonder that comes from working within natural systems.”

“The foundation of any religion is not about laws, or what you eat, or how you practice specific rituals,” Sadeh says. “It’s about ‘wow.’ It’s about the fundamental human experience of awe. Farming’s a great way to get back to that.”

Photos courtesy of the Adamah farm at the Isabella Freedman Jewish Retreat Center.