This St. Paul Artist Hosted 2,000 People For a Meal and a Conversation About the Food System | Civil Eats

This St. Paul Artist Hosted 2,000 People For a Meal and a Conversation About the Food System 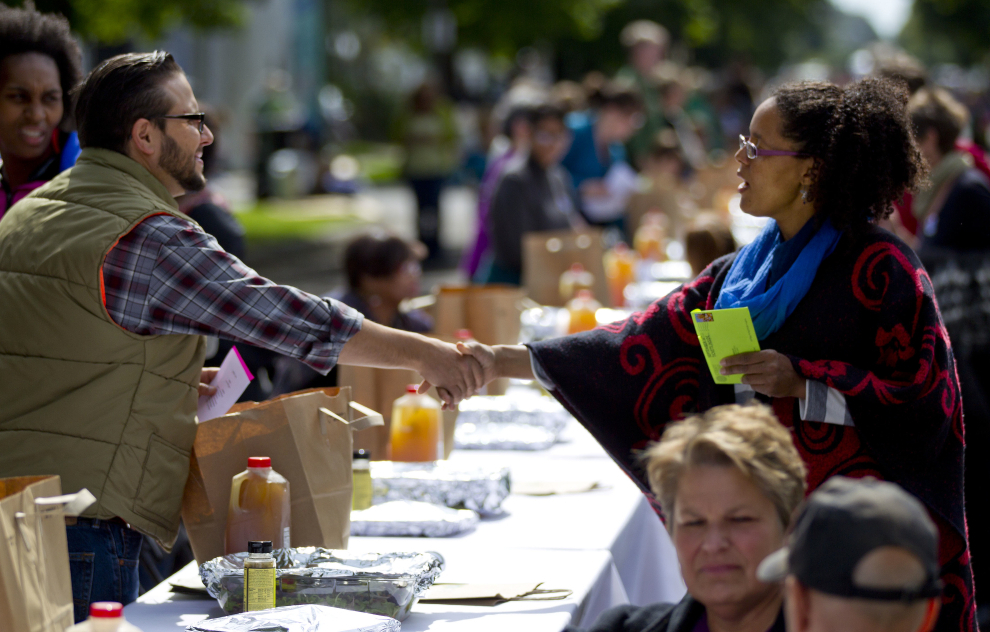 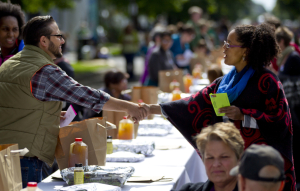 It’s a Sunday afternoon in the Frogtown neighborhood of St. Paul, Minnesota and we’re sitting down to an outdoor supper. A breeze lifts up our paper plates and placemats and everyone dives at the table to hold them down. A man wandering past waves at someone a few seats over. “We haven’t met,” he says, “but I recognize you. How are you?”

It feels like we are at a neighborly backyard barbecue, except that our table stretches a half-mile up Victoria Street and there are more than 2,000 people milling about. In fact, we’re at Create: The Community Meal, a multi-media public art project by artist and longtime Frogtown resident Seitu Jones that aims to lower the barriers to healthy food choices.

A bell rings and we all sit down to eat. A procession of 250 volunteer servers, our hosts, comes to the table bearing compostable trays of sweet and spicy jerk chicken. As they set the food down in front of us, they perform a series of choreographed movements—open arms, swirling hands—and then we recite “A Grace,” a nondenominational poem written for the event, in unison: “ … Let us gather close, closer, in friendship, now making a new start as the summer ends, joining our stories, our hands, our hopes at one table.”

Jones provided each of the hosts with a set of prompts to get us sharing food stories and talking about how we can impact access to healthy food. But we don’t really need them. Our plates piled with free-range chicken, black beans and rice, collard greens, mixed green salad, and corn bread, much of which was produced sustainably at small local farms not 50 miles from where we are sitting. We take our first bites and the food is delicious and people just start talking. 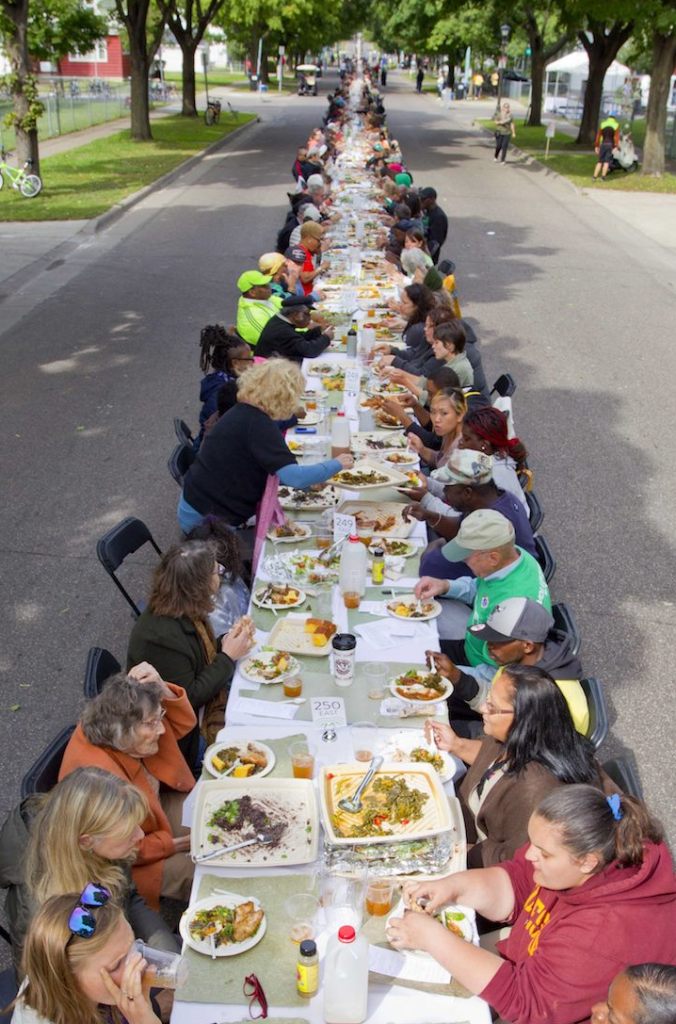 Better Than a Statue in a Park

Today’s meal has been many years in the making. Jones says it began with the parade of neighbors he would see walking past his studio windows, carrying bags of groceries from the convenience store. “Frogtown is one of the most challenged neighborhoods in St. Paul,” he says. “It’s one of the poorest, one that the foreclosure crisis, when it hit, really hit hard.”

Jones is a member of Afro-Eco, a local environmentalist organization, which in 2009, worked with three other area nonprofits to secure a grant from the U.S. Department of Agriculture to assess the food needs of four St. Paul communities, including Frogtown. In the survey process, Jones expected to hear people talk about cost, access, and transportation issues.

“What really surprised me was that people were intimidated by healthy food choices, because folks had forgotten how to cook,” he says. “For the last 70 years, we’ve been conditioned to buy food in boxes and prepare it in a microwave, or even to pull up to a restaurant and get food from a take-out window.”

Jones began thinking and talking about an art project that would alleviate the fear of cooking, demonstrate healthy meals, and introduce people to their local farmers.

Enter Public Art St. Paul. The organization had been leading the development of a master plan for public art in the city’s Central Corridor and Jones was one of several artists they asked to consult on the project. As a group, they looked at public art as a socially engaged process. “In other words, regardless of the medium, the artists seemed to have an idea about changing the world,” says Christine Podas-Larson, president of Public Art St. Paul and producer of Create. “Speaking with their art, they wished to illuminate conditions in the urban life of the city and change the urban future.”

When one thinks about public art, the first thing that often comes to mind is a sculpture in a park. Public Art St. Paul does that, too, but in working on the Central Corridor plan, the artists wanted to impact large systems—the city’s entire sidewalk system, the sewage management system, or in the case of Jones, the food system.

In 2012, Public Art St. Paul decided they needed a demonstration project for the Central Corridor plan. “We needed something that would spark, so people would really understand what we were talking about here,” says Podas-Larson. Jones’ idea for a large public meal fit the bill.

A year later, Jones and Public Art St. Paul secured $50,000 from The Joyce Foundation in Chicago. Since then, the organization has provided much-needed production muscle, including everything from getting permits to training the 400 volunteers needed for the community meal, to helping Jones canvas the blocks surrounding the meal’s location to ensure that people in the neighborhood make up half the guests.

The goal was to “ask people to make a pledge. Not only to eat more healthily, but actually to begin taking some control, or at least a closer observation of the food system, so we can collectively begin to change it,” says Jones. “This is an intervention.”

To describe Create: The Community Meal as ambitious is an understatement. In addition to the community meal, Jones commissioned two ingenious mobile kitchens. Each one is comprised of three modules that open Jack-in-the-box style to provide a tiny kitchen, washing station, and hot and cold storage. They can be attached to bikes or stacked on a flat bed and wheeled out into the community for pop-up cooking lessons.

Jones has also spent much of the last year and a half in backyards, schools, and at smaller community meals, collecting food stories from Frogtown residents. He has chronicled their memories and asked questions about how they understand the food system. Jones heard, again and again, that food is one way that we can show our love for one another. The stories informed the project and Jones hopes they will end up in a published collection of some kind. 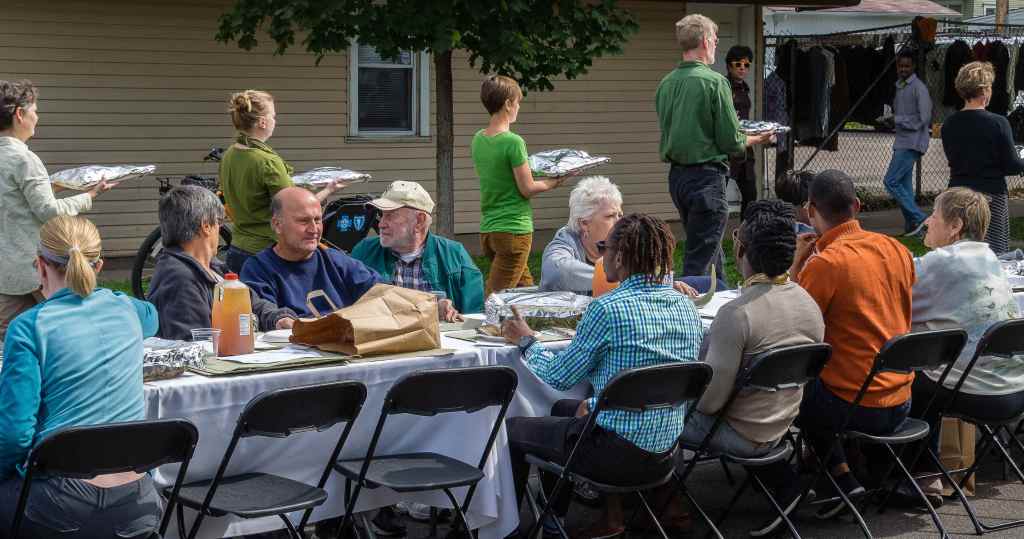 On the day of the meal, the conversation feels almost confessional. Scott Holm tells us he grew up on a dairy farm, but early in his career he spent a lot of time on the road, eating essentially junk food. When he finally got a job based closer to home, he says: “I didn’t want to do that anymore. I decided I could make the effort to cook.” He gets most of his vegetables from the farmers’ market and when a man across the table from him says that all the food he buys is packaged or pre-prepared, Holm offers that it’s easy and quick to cook a chicken like the one we’re eating.

A couple blocks down the table, Sheronda Orridge says that although she has lived in Frogtown for 17 years, she grew up in a Chicago community, where no one had to worry about whether they had food or not. “Neighbors came over to neighbors and they plotted about what they were going to fix and everybody ate together. I’d like to get back to that, being able to combine resources and sit down together, because when you do that, you begin to build community. You know, a lot of great things are done over food.”

After a bit, another bell rings, and our host asks us to make a pledge to impact the food system. Our section of the giant table promises to host small meals in our communities, where we will continue this conversation, and to shop around the perimeter of the grocery store—in order to avoid all the packaged and processed foods in the center aisles. The hosts writes our pledges on one of the handmade-paper placemats created for the event, and then a third bell rings and we all join in to recite “A Closing,” also written for the event: “We wish to never forget the healing power of food, community, and love. We go in peace.”

And so we do, but we do not go quietly. As we walk back to our homes and cars, the air is full of chatter, people talking about planting boulevard gardens, distributing free planters, and launching mobile carts to sell sustainable produce curbside—ideas for change.

Susan Pagani is a freelance writer and editor in Minneapolis. Her work has appeared in Civil Eats, East Bay Express, Heavy Table, Sierra Magazine, Los Angeles Review of Books, Sotheby's Artful Living and the San Antonio Express News, where she was food editor. She has also published nonfiction essays in Switchback and three collections, Literary Orphans, Minnesota Lunch, and The Secret Atlas of North Coast Food. She received her MFA from the Bennington Writing Seminars. Read more >