Want to Be an Artisan Cheesemaker? Here's Where to Start | Civil Eats

Want to Be an Artisan Cheesemaker? Here’s Where to Start 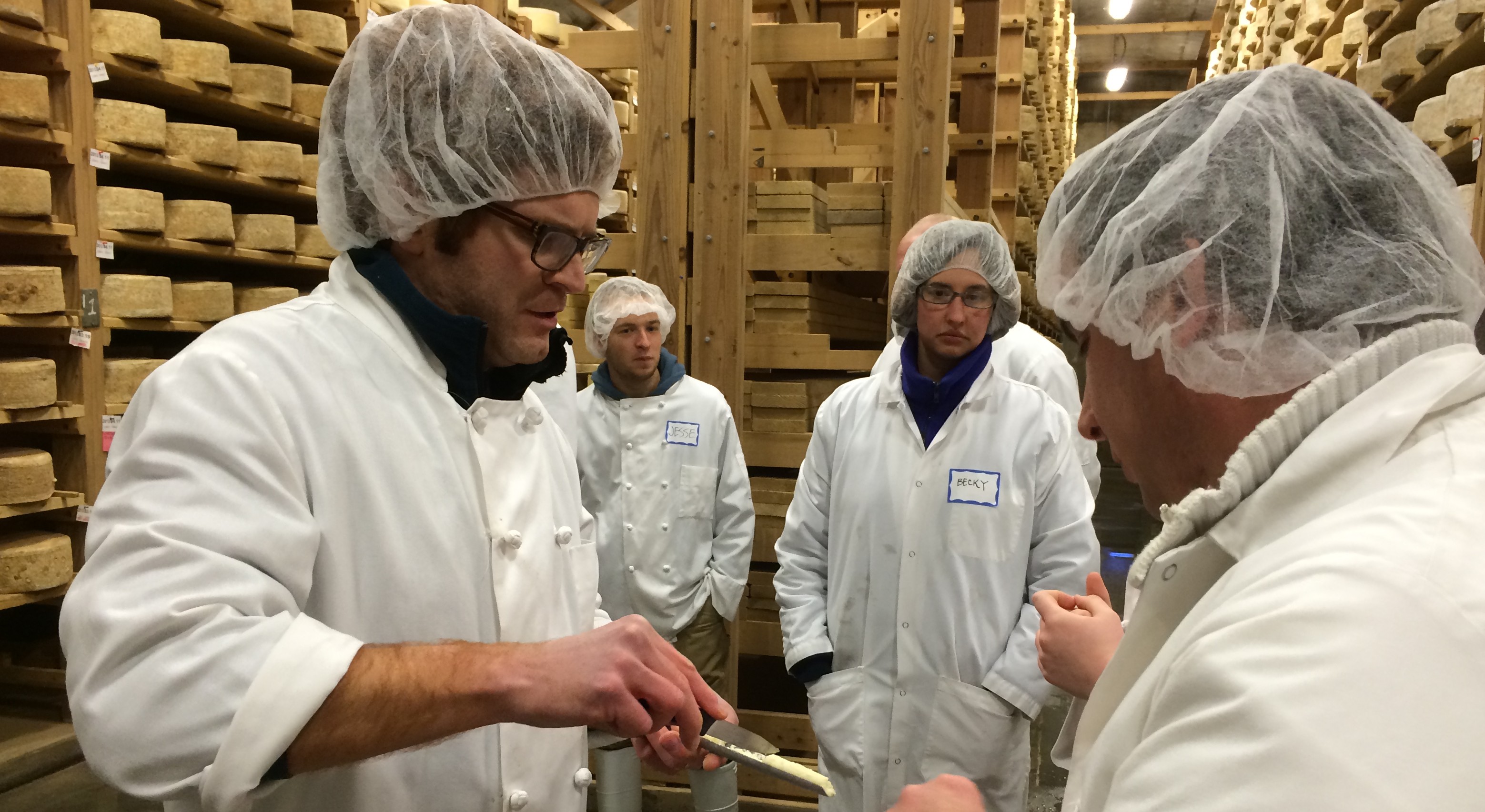 There are two stories about the artisan cheesemaker’s life: The fantasy, filled with bleating goats, calm country days, homemade wine, and an enviable supply of chèvre, and the reality, which looks more like a scientific laboratory with a lot of dishes to wash. As most cheesemakers will tell you, their craft is an incredible alchemy of grass, sunshine, and milk, but it’s no tres leches cakewalk.

The job can be tedious and it is also neurotically clean.

“Cheesemaking is 70 percent washing,” says Vivien Straus, author of the California Cheese Trail and public relations specialist at Northern California’s Cowgirl Creamery. A cheesemaker lives in a white coat, rubber boots, and a hair net. Unfortunately, the marketplace itself is often less tidy, with artisans pitted against subsidized European cheesemakers and large American manufacturers, who can afford to sell their products for less.

And yet for all the obstacles, America is in the midst of a lactose renaissance. In the last 15 years, the country has gone from microwaving Velveeta to winning international awards and converting domestic palates. Sue Sturman, the Anglophone Director at Academie Opus Caseus, claims that today’s new American cheeses are about ingenuity. “Cheesemaking here isn’t fettered by tradition,” she says. “It’s an expression of the people who make it.”

Kraft singles might not be nearing their demise, but American artisanal cheesemaking appears to be gaining in popularity. And for some, the connection between conscientious farming, healthy milk, and excellent cheese is inspiring enough to make a career change.

So where do wannabe professional cheesemakers go to hone their skills?

Avoid programs that will park you in a classroom, says Linda Faillace of Three Shepherds Cheese in Vermont. Nicknamed the “Cheese Whisperers,” she and her husband Larry teach 32 cheesemaking classes a year and advise professionals across the country. The couple urges people to choose a hands-on program or apprenticeship that will give them plenty of time in the creamery.

Their own classes are short (1-6 days) and small enough that students have personalized attention. While most large university courses focus on high-tech microbiology and commodity cheese production (i.e., how to mass-produce 1,000 pounds of cheddar), programs like the Faillaces’ will teach you to listen to the cheese itself.

“It will talk to you, but you’ll have to use all your senses to hear it,” says Linda, who scoffs at relying on gadgets like $800 pH meters to test her cheese. “If you go to a university class, they’ll focus on all the things that can go wrong and all the ways you can make people sick,” she adds.

There are a number of rules and regulations that apply to cheesemaking—and more to come, due to the implementation of the U.S. Food and Drug Administration (FDA)’s Food Safety Modernization Act. In particular, the use of wooden planks–an age-old technique—was called into question recently. But the Faillaces don’t think that cheese requires a hazmat suit or an advanced degree.

“Making cheese is simple,” says Larry. “What’s difficult is to make the same cheese over and over again.” Consistency can take years of practice, which is why the couple suggests not trying to supply the whole cheese shop on your own. Concentrate on one or two cheeses to start. And even then, they say, book a vacation every year—you’ll need it.

Some courses—like the two-week program put on by Sterling College, the Center for an Agricultural Economy, and the Cellars at Jasper Hill— teach students how to age cheese in the Old World tradition of affinage. This stage of the process coaxes the cheese to peak flavor by controlling room temperature, applying washes to the rind and rotating the cheese to manage mold growth. In France, affineurs abound. But in the U.S., where most American cheesemakers handle their own affinage, the Cellars are unique.

That’s all the more reason to open the facility to students. There shouldn’t be any trade secrets in the artisanal cheese community, says Barclay. “We’re not competing against each other. We’re competing against boring cheese.”

The path to cheesemaking often includes a stint as a cheese monger. The American Cheese Society has an online database full of cheese educators and many aspiring mongers apply to work at institutions like New York City’s Murray’s and Saxelby Cheese, where the staff training is something akin to earning a degree in high-end cheese retail.A Unique In-curd-ship

At Cowgirl Creamery, cheesemakers Sue Conley and Peggy Smith, who was recently elected as president of the American Cheese Society, have created an internship that connects cheesemaking to the sustainable food movement. Each year, they invite students from their alma mater–the University of Tennessee (UT) Institute of Agriculture–to Northern California for an 8-week immersion into the area’s organic farming scene and the inner-workings of a thriving cheese business.

One of this season’s apprentices, UT student Stephanie Brooks didn’t expect to meet so many young people passionate about farming when she came west. “In Tennessee, it’s like farming is dying out. At home, the people who care are mostly older and no one else knows much about agriculture anymore,” she says.

Apprentices explore each angle of the Cowgirl enterprise, including the dairy farms that supply it. Conley says she wants the students to understand that the company isn’t successful because it has grown big. They still produce their cheese in small 300-gallon batches. But instead, they’ve kept their integrity and increased their profits by partnering with other local businesses.

“We want to show the UT students that you can stay small and organic and still be successful by working with your community,” she says. In order for Cowgirl to do well, the farmers and retailers they collaborate with have to do well, too. And everyone, cheesemaker, dairyman or restaurateur, depends on the health of the land.

No matter how sophisticated your gouda or how silky your mascarpone, making cheese is only one part of the business. Before you can even start, you’ll have to find a steady milk source, a creamery to use, and customers.

“You get into this because you love cheesemaking,” says Lauren Bowne of Gypsy Cheese Co., “But you’re not always cheesemaking. I have to be the bookkeeper, the marketer, the delivery person. I could spend five hours a day in front of the computer just doing admin.”

When Bowne and her husband Jon left their well-paid jobs in San Francisco to start a small-batch goat cheese company in Sonoma County, they thought they were living their dream. Two and a half years later, they don’t regret the move, but the romance has often been overshadowed by economic realities.

“The money trickles in and you’re always owed something,” Lauren says, explaining that to succeed, “you need to be committed to self-employment.” When you’re your own boss, there are no direct-deposit paychecks and no built-in healthcare packages. John, a lawyer, takes freelance work to help pay the bills, but that means more of the cheesemaking falls to Lauren.

The Bownes actually studied under Linda and Larry Faillace. “The best advice they gave us,” says Lauren, “Was to pick a cheese that fits your lifestyle.” The young parents needed a cheese that would accommodate daycare drop-offs and family dinners, so they went with unpasteurized styles that have fewer steps to prepare, like feta.

Lifestyle is important, but so is your own personality. If you don’t have the social stamina to sell at the farmers’ market every weekend, stick to wholesale. New cheesemakers need to seriously consider their market, says Linda Faillace, and their price point.

“You should pick a price that makes your palms sweat and your mind go, ‘Can I really get that for my cheese?’” she says. “Cheesemakers are often too humble. They forget how much work goes into what they do.”