5 Reasons the Tyson-Hillshire Buyout is a Big [Meat] Deal 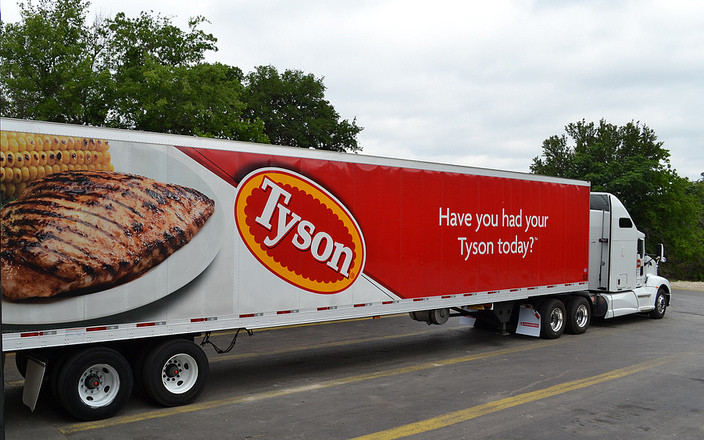 Although it has been in the works for months, the merger of Tyson Foods and Hillshire Brands went public the week before Labor Day, when the U.S. Justice Department approved the deal. The merger brings together the largest meat processing company in the U.S. (Tyson) and the 11th largest (Hillshire), for $7.7 billion. And even if you buy mainly sustainable and grassfed meat, this merger is worth watching. Here’s why:

1. You’re probably eating Tyson meat without even knowing it.

Tyson was interested in Hillshire in part for its branded products: Jimmy Dean, Ball Park Franks, and Hillshire Farms. The “frozen handheld breakfast sandwich” is one of the company’s specialties. Tyson hasn’t had similar success with its own forays into branded meat products (Day Starts frozen breakfasts, anyone?) and sees the merger as an opportunity to direct meat from its processing empire into an already successful national brand. Until now, Tyson has excelled at selling unbranded meat to restaurants and cafeterias and it is the national leader in “private label” meats–those sold as in-house supermarket brands. So when you eat bacon at a restaurant or chicken salad at the supermarket deli, if it doesn’t feature the name of the farm, there’s a pretty good chance it’s from Tyson.

Tyson has become powerful by vertically integrating its operations: It buys up all the component parts of its supply chain, from grain dealers to breeding facilities to slaughterhouses, and incorporates them into the company to gain control over prices and production. As other companies have followed suit, encouraged by market forces and the “get big or get out” policies that prevail across agriculture, independent farmers and their supporting businesses have been bought out. According to the U.S. Department of Agriculture (USDA), the U.S. lost about 70 percent of its hog operations–150,000 farms–between 1993 and 2012 and with them went much agricultural infrastructure. As a result, the few independent farmers producing pastured pork humanely often have to drive 200 miles each way to a slaughterhouse. By buying up so many pieces of the farm supply chain, Tyson has contributed to an environment where many of the producers working outside their system must struggle to survive.

3. Tyson has its eye on the sustainable meat sector.

If you eat “better” quality meat, you might not pay much attention to Tyson. But Tyson is paying attention to you. Organic is the fastest growing sector of the U.S. food economy and even two years after Lay’s advertised its potato chips as local, corporations have not slowed their pursuit of the natural and sustainable markets. And meat is one of the biggest potential growth areas. Most of the nation does not have access to high quality, locally-raised meat in the grocery store, particularly value-added products like sausage and hot dogs. A few towns are beginning to rebuild their local slaughterhouses or sausage companies, but the infrastructure is rare. If the expanded Tyson/Hillshire sets its sights on this vast market and starts putting out greenwashed imitation products, it could block regional efforts to rebuild truly sustainable meat production.

The merged company’s control over the pork supply chain–from hog to grocery case to marketing–would make it extraordinarily difficult not only for independent farmers, but for towns trying to invest in a slaughterhouse or meat locker, a grocery store wanting to carry specialty products, or the artisanal sausage maker trying to expand her market.

4. The Justice Department is sitting back and letting this happen.

Critics of this latest merger include farmers and ranchers, faith and consumer groups, and senators, including Chuck Grassley (R-Iowa), who wrote to the Justice Department about loss of competition and consumer choice. In the end, the Department required Tyson to sell off a small division that directly competes with Hillshire to buy sows from farmers, over concerns that the combined companies would dramatically reduce the options—and therefore the prices—for farmers trying to sell their hogs.

The move was vitally important for farmers in an already highly concentrated industry, but additional questions about the impact on consumer prices and increased vertical integration were left unanswered. In a statement following the merger approval, National Farmers Union President Roger Johnson pointed out, “Antitrust laws were put on the books to keep powerful industries–like the meat industry–from being overly consolidated. Yet nearly every merger request they file is approved by the Department of Justice. As a result, the meat industry grows more powerful by the day and the family farmer continues to get squeezed.”

And it’s not just meat. Consumer group Food & Water Watch follows food industry mergers and Executive Director Wenonah Hauter says that in food and agriculture, “the Justice Department never blocks mergers and rarely offers significant divestments.” It is a similar story from airlines to hospitals to grocery stores–and with the proposed Time Warner Cable/Comcast merger on the horizon, set to create the largest internet company in the country, the way the Justice Department considers–or fails to consider–the consumer impact of big mergers affects us all, whether or not we eat frozen breakfast sandwiches.

5. Tyson will save money, consumers not so much.

While consolidation has pushed down the prices farmers are paid for hogs over the past few decades, these savings are rarely passed along to consumers; the meatpackers and retailers are pocketing the difference. USDA and independent economists studying the pork industry have found that, likely due to the extraordinary concentration already in the industry, consumer pork prices are particularly “sticky,” meaning that consumers pay more when hog prices are high, but when farm prices drop, grocery store prices do not fall as quickly or completely. The price of bacon and processed pork has gone up recently because of Porcine Epidemic Diarrhea Virus (or PEDv), a widespread disease affecting piglets, and, according to Hauter, “a larger Tyson can capitalize on this rising price trend but will have little incentive to lower prices when hog costs decline.” Organic pork, already more expensive, has also been hit by the disease, and will likely increase in price as well.

In a statement when the merger was announced in July, Tyson CEO Donnie Smith touted that the combined firm will “ensure more choices for our customers and consumers.” And he’s right. If by that he means the choice between a Pancake and Turkey Sausage Griddler or a Jimmy Dean Ham and Cheese Croissant Sandwich.