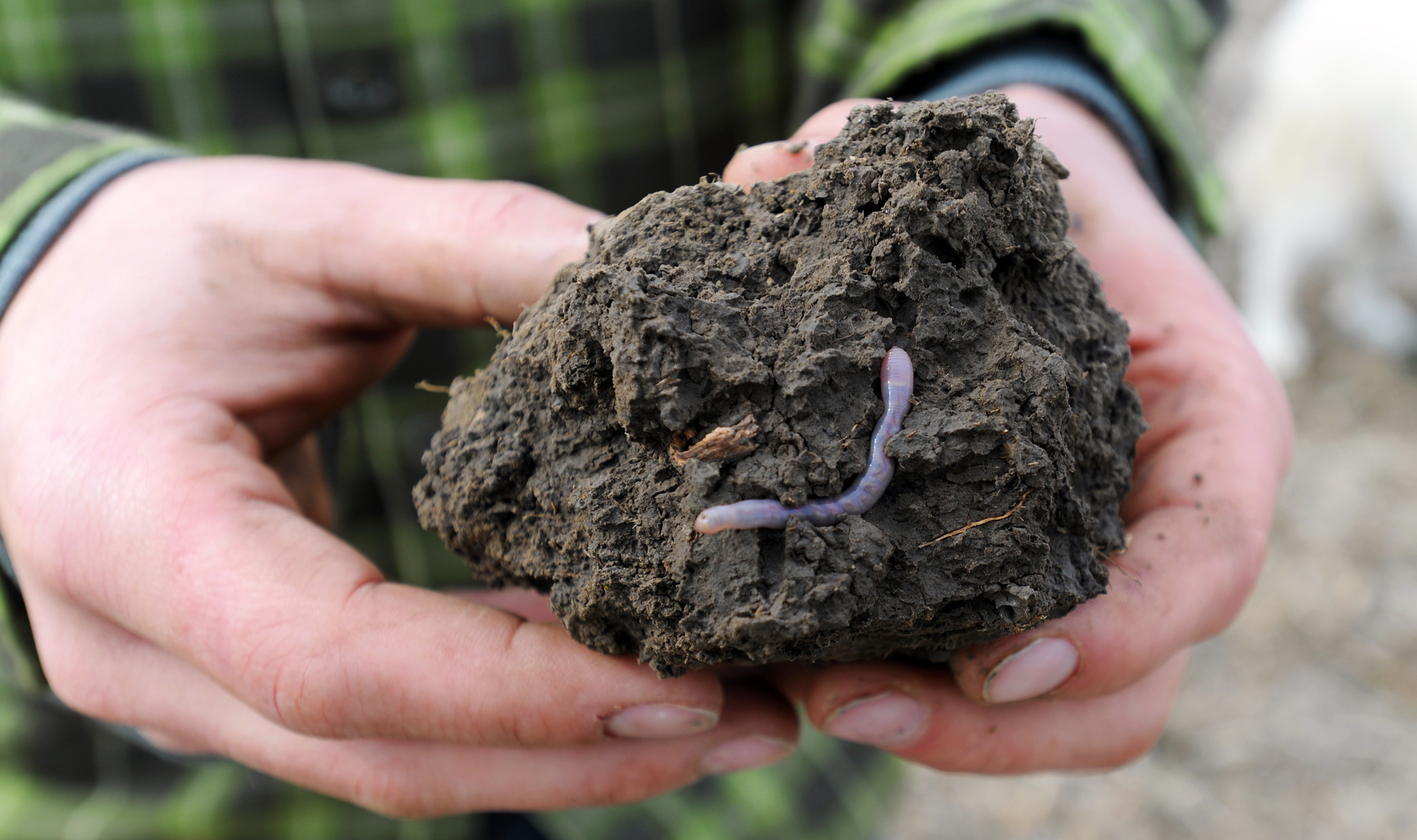 Paul and Elizabeth Kaiser of Northern California’s Singing Frogs Farm grows fruit and vegetables completely without machinery, a system Paul refers to as “non-mechanized, no-till.” He said goodbye to his tractor and tiller seven years ago after he felt he was unnecessarily harming wildlife, saw too many machines break down, and watched his soil quality decrease. Now, his eight-acre farm has a robust community supported agriculture (CSA) program, and his soil is full of life.

Whereas many farmers believe in breaking up the soil with tractors to control weeds, others, like Kaiser, practice no-till agriculture. A subset of conservation tilling, no-till demands that crops be planted directly into the ground without overturning the earth to ready it for planting. Conservation tilling utilizes the residue (dead crops and plants) from the previous years’ harvest by leaving some, or all, of the residue on the surface before planting.

It took Kaiser two years to make the transition to farming this way, but it has made a big difference during years with lower than average rainfalls such as this one. Kaiser explains, “Our no-till soil management has led to an increase of our soil organic matter (SOM) from 2.3 percent to over 6 percent (at a 12-inch depth). For every 1 percent increase in SOM, an acre of topsoil can hold an additional 16,000 gallons of plant-available water.”

Because the soil retains water, Kaiser is able to use drip irrigation to water his crops for one hour every 5 to 6 days. “And we’re still dry farming tomatoes,” he adds.

The latest estimates say the drought to California could cost the agriculture industry as much as $2.2 billion in losses. And even if rain does come this year or next, scientists predict that global warming will increase the intensity and length of future droughts, making now a good time to begin adapting to a drier, hotter climate. No-till could be an important tool during that adaptation.

The Institute for Atmospheric and Climate Science in Switzerland released a study in July suggesting that no-till farming is beneficial in lowering surface temperatures by as much as 2 degrees Celsius (or nearly 4 degrees Fahrenheit) during summer months. This is important because moderating soil temperatures helps reducing soil moisture evaporation, especially in the top two inches.

According to the U.S. Department of Agriculture (USDA) Natural Resources Conservation Service (NRCS) report from Iowa State University, water filters into soil much faster (at a rate of 5.6 inches per hour compared to 2.6 ) if that soil hasn’t been tilled.

Scientists at the University of California, Davis have also found that using conservation tilling can help increase soil moisture retention.

Brock Dolman, a permaculture expert and Director of the WATER Institute at the Occidental Arts and Ecology Center, thinks that no-till can be instrumental during drought years—by protecting water quantity and quality. “At the field level,” Dolman explains, “the beauty of no-till in the wintertime is that rainfall is allowed to soak into that soil.” When left alone, healthy humus develops in the soil, and “humus has the capacity to absorb water and acts as a sponge that becomes available in the system for other plants to use,” he explains.

In the summer, when water is scarce, Dolman says, soil that hasn’t been tilled usually has a layer of mulch at the top. The mulch “reduces evaporation losses and holds more water. This results in both a conservation of water and a reduction in the total amount used.” All of this adds up to what Dolman refers to as “More crop per drop.”

But results don’t come quickly for farmers making the transition to no-till. “You can’t expect to get results in the first season if the soil you are working with is dead,” says Dolman. “The folks who complain about no-till are expecting miracles from a corpse.”

Indeed, no-till farming comes with its fair share of critics. For one, the practice often requires a great deal more herbicides than average to manage weeds, especially early on.

Typically, as tillage is reduced, herbicide management is increased in an attempt to control weeds. Although some surface residues are generated from no-till, they are not enough to provide consistent weed control. This dependence on herbicides generates a host of problems, from resistant weeds to the destruction of beneficial insects.

That said, increasing evidence shows that heavy herbicide use might not be necessary when practicing no-till. And spraying herbicides is a shortcut that organic farmers, like Kaiser, refuse to endorse.

Jeff Mitchell, a Cropping Systems Specialist with the University of California, argues that if you practice no-till farming correctly, weed management isn’t an issue. Mitchell believes that the mindset of the farmer is the most important part of the transition. If the farmer doesn’t completely dive into the system, he or she will fail. It’s an all or nothing method of farming.

This is easier said than done. “Farmers are not used to it, they don’t have the equipment, and it is too hard to change their major systems,” Mitchell explains.

The consensus among no-till advocates is: If you treat your farm as an ecosystem and focus on soil health as the most crucial part of that ecosystem, the system works.

No-till farming is much easier to implement on large farms. For one it requires farmers to allow a few acres of field to rest between crops and that’s much easier when you have several hundred or thousands of acres. Smaller farms also generally need to maximize production on their limited land and might not have the flexibility to take a chance on no-till farming. It can also take years to fully master no-till methods and small farms rarely have that kind of time. Ironically, small and young farmers are more likely to experiment with the practice. Some smaller farmers feel that with less acreage, less capital is at stake. Newer farmers are less set in their ways and might want to try different methods of farming to yield better results.

Overall, the USDA reports that no-till farming in the United States is increasing by about 1.5 percent every year. In 2009 almost 35 percent of cropland had some portion of land dedicated to no-till, and no-till operations accounted for about 10 percent of the overall land. The 2012 Ag Census revealed that nearly 475,000 farms covering 173 million acres were farmed with conservation tillage or no-till practices.

What does Kaiser recommend to farmers thinking about making the switch? “Think outside the tillage box,” he says. “No-till [is]… so vastly different from the past 10,000 years of farming that one has to really commit to understanding soil science, soil biology, and ecology.”