Organic vs. "Organic": How Much Does Certification Matter? | Civil Eats

Organic vs. “Organic”: How Much Does Certification Matter? 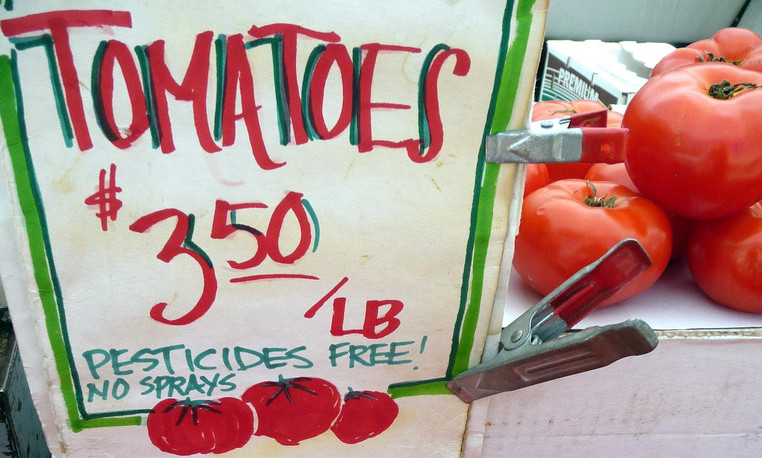 Whenever we go to the farmers’ market together, my husband and I disagree about whether we should buy the pricey certified organic berries (my husband’s vote) or the less expensive ones grown without certification, but described by the farm as “sustainably produced.” If I look deep into a farmer’s eyes and she tells me that her fruit is “no-spray,” I’ll buy her berries, saving almost a buck a pint. (After all, the strawberries we grow in our own backyard are not certified organic, but I feel good about eating them.)

Lately I’ve been wondering–is my husband right, or is no-spray enough? And what about the assertion—sometimes made by conventional growers—that certified organic farms use pesticides too?

In most cases, even certified organic produce is not pesticide-free. But compared to most conventional produce, it can mean a big step in a less-toxic direction.

“The overarching concept is that natural pesticides are allowed and synthetics are prohibited, unless specifically allowed,” says Nate Lewis, a senior crop and livestock specialist at the Organic Trade Association. Furthermore, before they can use any approved pesticides, organic farmers must prove that they have a preventative plan in place—and that the plan is failing to prevent pests.

So while most organic farmers rely on plant-based pesticides such as Pyrethrum (from chrysanthemum flowers), extracts of the Benin tree, neem oil, or an extract of the Japanese knotweed root (an effective fungicide), they can occasionally use synthetic pesticides—with strict limitations.

There are roughly 40 synthetic substances farmers can use under U.S. Department of Agriculture (USDA) organic standards, says Lewis. Some of these are as innocuous as newspaper, which is allowed for use as mulch or as a “feedstock” for compost, or sticky traps, which provide a physical function (trapping insects) and then are removed from the field at the end of the year.

Others include zinc, copper, iron, manganese, molybdenum, selenium, and cobalt—essential plant micronutrients that cannot be used as insecticides or fungicides in most cases. Instead, they’re usually used as soil amendments. (A full list of the chemicals that are allowed under USDA organic standards is available at the Organic Materials Review Institute.)

About 26 of the 40 synthetic substances allowed in organic crop production are considered pesticides. But these have restrictions, too. For example, soap-based herbicides can only be used on right-of-ways and ditches, but can’t come into contact with organic food. Boric acid, which is a synthetic insecticide, can be used for pest control, but can’t come into contact with crops or soil. Similarly, ammonium carbonate can only be used as bait in insect traps.

This list is constantly under scrutiny and is therefore always being revised. For example, until recently, USDA organic standards made an exemption for the use of antibiotics—specifically tetracycline and streptomycin—to be sprayed on organic apple and pear orchards to prevent fire blight, which is highly contagious and can wipe out a whole orchard.

“It was only allowed at bloom time, which is the only time the orchard is susceptible, so there’s no residue on fruit,” explains Lewis. Nonetheless, the National Organics Standards Board (NOSB) let the exemptions for these antibiotics expire—starting October 2014.

But just because a chemical comes from a plant doesn’t make it safe. Rotenone, a toxic pesticide that’s derived from the roots of several tropical and sub-tropical plants such as the jicama, can no longer be used on crops in the U.S.—even conventionally farmed ones.

“Rotenone has quite the sordid past,” says Lewis. Toxic to humans—it’s classified as “mildly hazardous” by the World Health Organization—rotenone has been linked to Parkinson’s disease in farmworkers. The Environmental Protection Agency revoked its use as a pesticide in 2007, after the companies distributing and selling rotenone voluntarily cancelled all food use registrations for it.

Last year, the NOSB recommended that it be put on the prohibited list by January 2016. But according to Miles McEvoy, Deputy Administrator of the National Organics Program at the USDA, the agency has more work to do before it can follow the NOSB’s recommendation. Until that happens, Rotenone can still be used on organic banana crops grown in tropical countries like Ecuador.

Despite these allowances, the pesticides and herbicides used on conventional farms are still significantly worse. Take organophosphates, for instance. This class of pesticide is used on conventional peaches, apples, grapes, green beans, and pears. According to Pesticide Action Network’s database, organophosphates are some of the most toxic insecticides used today. They have been shown to “adversely affect the human nervous system even at low levels of exposure” and hamper neurological development in children. The commonly used herbicides Glyphosate (Roundup) and Atrazine, have also both been shown to act as endocrine disruptors, meaning they interfere with the endocrine (or hormone system) in people and many animals.

Is Talking to Your Farmer Enough?

Oregon farmer Don Kruger, the owner of a 150-acre farm on Sauvie Island and two Portland farm stands, abhors labels. “I honestly would rather talk to the customers, if I could, or have them talk to my staff,” he says.

In the 14 years he’s owned his farm, he’s never sprayed a pesticide directly on any food crop. Yet, he says, “I have no interest in being straight-up organic. It gives me a little wiggle room to do things I might need to do.

Kruger uses a conventional fungicide on his raspberries. “The Tulameen is the best tasting raspberry—it’s fabulous. But the problem is, it’s prone to root rot,” he says. “I could grow another, inferior grade raspberry, but I don’t want to.” He sprays the plant just as it’s starting to leaf—before it blossoms or fruits.

He also uses an herbicide called Impact (a broad spectrum herbicide with topramezone as the active ingredient) on his corn. It kills the weeds—grass, pig weed, thistle, etc.—that would otherwise hinder the corn’s growth. “Otherwise you have to hand hoe it, and it’s really tough to do,” Kruger says. He sprays when the plant is two inches high and that’s it. “There’s no chance it’s on the corn,” he says.

Kruger believes he is offering a more affordable option, a middle-ground for folks who want local food that’s not conventional, but don’t mind that it’s not certified organic either. He is known in Portland for having the most affordable produce around and he prides himself on that.

But not everyone has the time for a 10 minute long conversation with their farmer about his growing practices and the nuances of what and when they spray. Furthermore, there are a lot of unregulated terms—like “no-spray” and “sustainably grown”—that get tossed around. And not everyone is as forthright about their practices as Kruger.

David Lively, vice president of sales and marketing at Organically Grown Company, the largest organic produce wholesaler in the Northwest, says farmers markets aren’t always as transparent as many customers believe. “There have been instances where growers selling produce at farmers’ markets have been busted for selling conventional as organic and product they bought off the market as their own.” Lively thinks—and many others in the organic movement agree—that organic certification offers the consumer extra assurance.

Other Reasons to Go Organic

At the end of the day, organic agriculture is about much more than reducing pesticide use. To grow food organically, farmers must build their soil, using techniques like composting, cover crops, and crop rotations rather than fossil fuel-intensive synthetic fertilizer. Doing so is a lot more work. But on an environmental level, that matters.

Excess nitrogen from fertilizer not only ends up in the atmosphere as nitrous oxide (where it’s a very potent greenhouse gas), it also ends up in our waterways and aquifers, where it causes everything from nitrate poisoning in drinking water, to toxic algae, to the dead zone in the Gulf of Mexico. Organic farms must also agree not to use genetically engineered seeds.

It’s true that organic certification requires a time commitment on the part of the grower. In addition to a 12-page application, as well as regular audits, organic farmers must document a great deal of what they do. The cost to farmers is also a factor, but it doesn’t have to be prohibitive. The USDA has a cost-share program that reimburses farmers 75 percent of the cost of certification, up to $750 per type of farming. Connie Carr, the certification director at Oregon Tilth, which inspects and certifies food producers for the USDA, says farmers take advantage of it.

“So if your certification costs $1,000”—the upper end of what a small farmer would pay per year—“you’ll get $750 back,” says Carr. Fortunately for farmers, this funding was renewed in the 2014 farm bill.

To help streamline the paperwork, which Carr says is no more arduous than applying for a loan or for college, the National Organic Program at the USDA introduced a “Sound & Sensible” initiative in 2013, which works with farmers to remove barriers to certification. Now, re-applying for certification each year is much easier (a farmer only has to submit changes) and some certifiers have launched online applications.

Will these changes lead to more certified organic farmers? It’s too soon to say. But one thing is clear: Consumer demand for organic food continues to grow. Organic food in the U.S. has been growing by an average of 13 percent per year over the past decade and reached $35 billion last year. Most farmers who take the plunge and go organic will have no problem selling their crops—and they’ll be able to charge a premium for them, too. And why shouldn’t they? Hoeing weeds by hand, cover-cropping, and keeping meticulous records is hard work. Maybe next time I’ll spring for those certified organic berries.

Curious about other sustainable farming labels? Stay tuned for a 2nd installment on alternative certification programs.