Feeding China’s Pigs: Is US Agribusiness Losing its Global Domination? 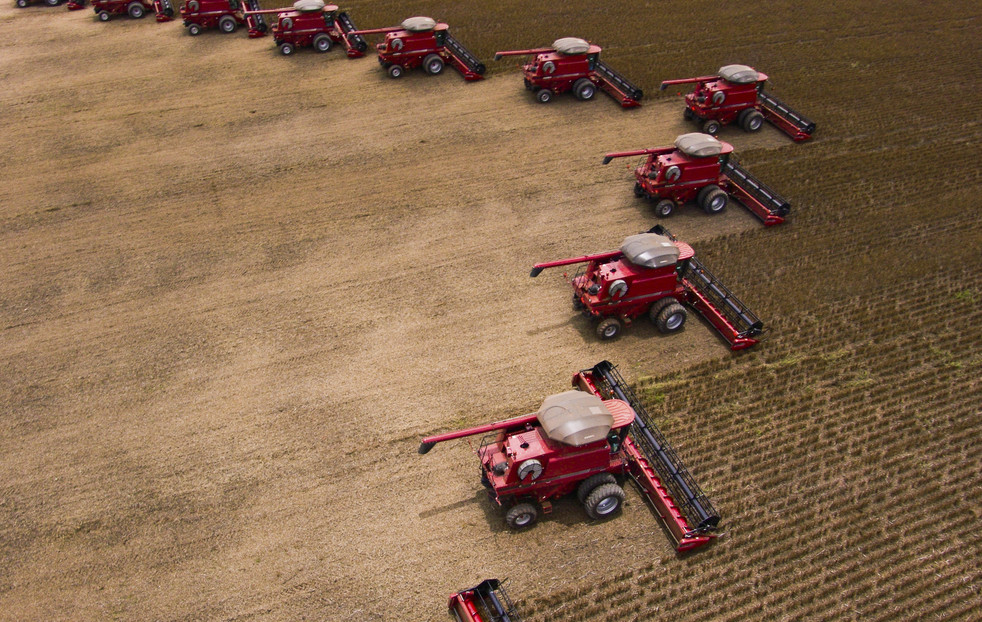 Meat consumption in China has been on a dramatic rise for the last three decades, with one-third of the world’s meat now produced in the country and more than half the world’s pork. Most of it comes from factory-style systems of farming, with large numbers of confined animals fed on grain. A lot of grains.

“We’re heading towards a new era…as the majority of the world’s feed crops are destined for China’s pigs,” predicts Mindi Schneider, an agribusiness researcher at the International Institute of Social Studies in the Netherlands.

As recently as two years ago, the U.S. provided nearly all–97 percent in fact–of the corn China imported. In 2013 alone, this added up to $1 billion worth of animal feed. When it comes to soy, the U.S. has been splitting the market with South American nations like Brazil and Paraguay. It still meant that between 2010 and 2012, we provided 40 percent of China’s total soy imports for a whopping $13 billion.

This soaring need for feed has helped China overtake Canada as the biggest importer of U.S. agricultural products. And while these changes have provided a boost for American Agribusiness corporations like ADM, Cargill, and Monsanto, there are also some new players in town.

His company has been at the forefront of a boom in demand for US soy and corn, and one of a select group of so-called ‘dragon-head enterprises’ given government support to go out and boost their global presence.

Now, in addition to American companies buying into China’s domestic sector (see Tyson’s purchase of a major stake in the poultry producer Xinchang in 2009), Chinese firms are looking to challenge the long-standing hegemony of America’s agribusiness giants.

It started back in 2008, when the state-owned Chinese grain trader COFCO bought a 5 percent stake in the American pork giant Smithfield, but the public didn’t really start paying attention until China’s biggest pork producer, the WH Group, took over the rest of the company last year.

Although the Smithfield deal and the rise in pork exports to China–up 44 percent between 2013 and 2014–has garnered a lot of media attention, the real battleground for the emerging U.S.-China rivalry is in South America’s commodity-exporting countries.

In countries like Brazil and Paraguay, U.S. agribusinesses have long dominated. But that’s changing fast. Last year China jumped ahead of the European Union as the largest purchaser of both soy and other agricultural commodities from Brazil–a key player.

COFCO’s purchase of grain traders Noble Group and Nidera, both companies with major interests in Brazil, earlier this year enabled several dragon-head enterprises to gain a foothold in the country. The deal to buy Noble, incidentally, also gave COFCO control of the fourth largest grain trader in Paraguay, where 96 percent of the soybeans are exported.

“It could be a real game-changer helping Chinese agribusiness become more competitive with the other agri-food companies in Brazil,” says Emeile Peine, a global agribusiness specialist at the University of Puget Sound, Washington. Peine says the Smithfield deal signalled a shift in strategy, wherein companies went from saying, “‘Okay, we’re going to partner with smaller Brazilian companies on the ground to try to establish our own infrastructure’ to ‘we’re just going to purchase our way into the market.’”

And it’s a shift that could be accelerated as companies including Liu’s New Hope Group look to import more corn for use as animal feed. The World Bank reckons corn imports will rise from two to 15 percent of China’s total consumption by 2030.

Remember that 97 percent number from earlier in the story? That’s the amount of the corn we grow in the U.S. that went to China until last year. However, in an effort to reduce this dependency and boost the influence of its own agri-food corporations, China has recently signed a supply agreement with Brazil. It’s a move that deliberately benefits companies like the New Hope Group and the major state grain traders COFCO and Beidahuang.

It’s been a double-blow for America’s agribusinesses, with China also repeatedly rejecting shipments over the past year claiming they contain an unapproved GM corn. Cargill admitted a 28 percent drop in its earnings earlier this year was largely down to China’s corn rejections.

“Unlike soy, where US. agri-food giants took a firm control and are deeply embedded both in South America and China, in corn, Chinese firms like the New Hope Group are poised to be key traders,” explains Schneider. “A major political economic shift is happening in real time. Cargill and Co. are not being displaced, but their supremacy is being challenged,” she adds.

While the arrival of Chinese influence could help Brazil shift its relationship with U.S. business interests, it is likely to come at the expense of its biodiverse grasslands, wetlands, and forests, particularly in the newer farming frontiers of the Matopiba region.

“Corn is going to be the next big factor in the Brazilian agricultural scene,” says Peine. “It’s much more water and nutrient intensive than soy, so its expansion could be an important moment of change in the Brazilian agricultural industry, with major environmental implications. It’s going to be a real struggle between expanding production area in Brazil and people who are trying to limit deforestation,” she adds.

China’s agri-food sector has, so far, shown little concern about such issues. Despite being the largest soy importer in the world, the nation does not demand any of its soy imports to be sustainably produced or certified. And unlike Cargill and other American companies, Chinese agri-food corporations are absent from the Round Table on Responsible Soy, for which members voluntarily commit to not purchasing soybeans from newly deforested land.

Greenpeace Brazil forest campaigner Romulo Batista fears the worst: “As usually happens with every commodity, it is the market that will regulate the increase in areas planted with this crop. If the demand is greater than the supply and the financial returns are high we can expect the same environmental damage usually seen in others monocultures, with new areas of forests and savannas converted into cornfields.”

Tom Levitt is a food and farming journalist and managing editor at ChinaDialogue.net. Read more >