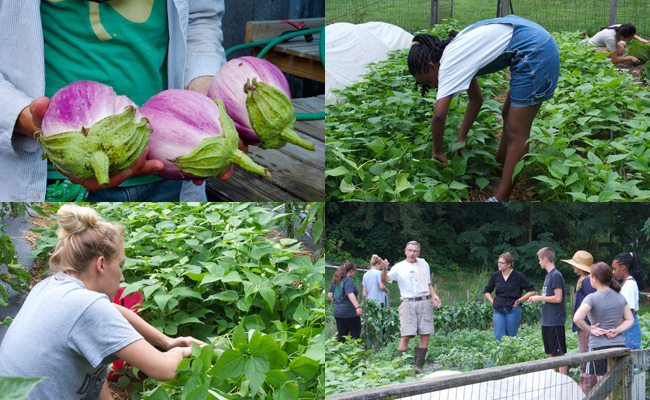 On a hazy, humid July morning, 17-year-old Celeste McMullan crouches in a bed of Romano bean plants. It’s her first time picking beans, but she already seems to have mastered proper picking technique, carefully moving her fingers from the roots upward, removing only the greenbeans that are fully grown.

Before this summer, McMullan had never thought much about greenbeans—or food, in general. Now, she says, “I’m learning what real food is.” At her part-time job at a fast-food chain and at home she’s noticed that a lot of people choose food purely out of ease and convenience. “I told my dad I was going to make a stir-fry, and he was like, ‘All you have to do is dump a bag out,’” McMullan says, “and I was like, ‘No, we’re going to make it the real way.’”

McMullan is one of 15 interns working with the central Pennsylvania–based LEAF Project, a nonprofit that provides paid summer farm internships to teenagers. The mission of LEAF, which stands for Leadership Education and Farming, is to reconnect young people with the food they eat, the land on which it’s grown, and to each other through hands-on farming, learning and community outreach. The interns spend three days a week, from mid-June to early August, on Bert Myers’ 2.2-acre farm near Newville, Pennsylvania, where they plant, prune and harvest mostly heirloom and gourmet vegetable varieties. Other days are spent cooking with local chefs or working at LEAF’s eight partner farms. Three interns stay on into the school year to help plan and prepare for next season. All of the interns are paid a stipend for their work.

This type of program has become fairly common in urban parts of the country, including Brooklyn’s Added Value, New Orleans’ Grow Dat Youth Farm, Madison’s Community GroundWorks and Boston’s The Food Project, as it is commonly agreed that city kids benefit from growing and harvesting their own food. But increasing evidence suggests that the majority of rural youth are no more in touch with the source of the food they eat than those in cities. And 16.5 percent of rural youth are obese, compared to 14.4 percent of their urban counterparts. In other words, there’s a real need for food and farm education in the country.

The LEAF Project grew out of founder/executive director Heidi Witmer’s* own family farming heritage and her experience as an educator. As a farm kid, she had regular chores. Her parents instilled beliefs about the value of hard work, efficiency and personal responsibility early on. After college, Witmer, 34, worked in Vermont and learned about The Food Project. She attended its training institute and launched LEAF in 2013 based on the belief that gardening can have a “profound impact on our own development.”

“It teaches you all these really basic things about compassion for self and others, integrity, consistency, and the importance of meaningful work for all people,” she says.

It’s the first day of greenbean-picking, and Bert Myers is explaining to the interns how to harvest efficiently, working up one side of a row and down another, and how to prevent damage to the plants. His family has been farming this same plot of land since 1866. A clutch of teens gets to work on the Provider beans, squatting and leaning over the verdant rows. It’s mostly quiet, save for the steady swish of hands diving into the plants and the light plink of beans falling into buckets.

Witmer watches, occasionally reminding the teens to check their posture. “Beans are a great way to teach young people how to work,” she says, smiling. “I mean, they’re green. I remember cursing God as a child and thinking, ‘Why did he make beans the same color as their foliage?’” Later, she’ll pull on her straw hat and pick with them.

Just as important as the work the interns do is who they work alongside. The LEAF staff brings together as diverse a group as possible. “One of the tenets of sustainable agriculture is to develop your own ecosystem with a lot of different varieties and cultivars,” Witmer says. “We’re using those same concepts in selecting the youth. We have some rural folks and some town folks, wealthy and low-income, high achievers and youth who’ve struggled. We’re trying to create that ecology that allows for growth.”

Most of the interns have had no agricultural experience prior to LEAF. Truman Heberlig, 16, is the lone exception. His family owned a dairy, and his brother works in agriculture. While much of the work is familiar, it has sharpened his focus. “I was part of the staking crew, and I also have to prune the tomato and pepper plants,” he says. “It helps when you have to prune and tie. It teaches you to pay attention to detail.”

Lessons like these are why farmer Myers partnered with Witmer, as he recognized LEAF’s potential to teach skills and foster individual growth. “Even if they never grow another bean, if they learn these personal attributes, these hard and soft skills about being a good employee, that’s what counts,” he says.

LEAF is still a new program, but Witmer is planning for growth, and she has received requests to establish similar programs in other communities. And, it’s already making an impact. In post-program surveys last year, more than half of the participants and their families reported eating more fruits and vegetables, buying more locally raised food and eating more home-cooked meals.

Half of what LEAF harvests is sold to local restaurants, and the other half is donated to area hunger-relief organizations. The interns learn about the food system firsthand, from seed to plate. Hunger relief is an important piece of that, Witmer says: You can’t teach kids about food without also teaching them about who has access to it and who does not. In 2013, LEAF harvested 600 pounds of produce and provided food to 800 people. This year, Witmer says they’ll do more.

Former Food Project program director Greg Gale has mentored Witmer, and he expects paid first-job models like LEAF will become more widespread. The idea has been at work for a few years, he says, with farm-to-cafeteria programs and school gardens, “but this is out-of-school time and deep engagement with young people in local agriculture.”

Witmer eschews the stereotype of the idle, apathetic teen. In fact, she has seen just the opposite. “Young folks are really capable and have tremendous physical energy and passion,” she says. “We’re trying to harness one of the best resources this area has.”

*who is not related to the author