Video: 3-D Seafood Farms Could Fix the Ocean and Our Diets | Civil Eats

Video: 3-D Seafood Farms Could Fix the Ocean and Our Diets 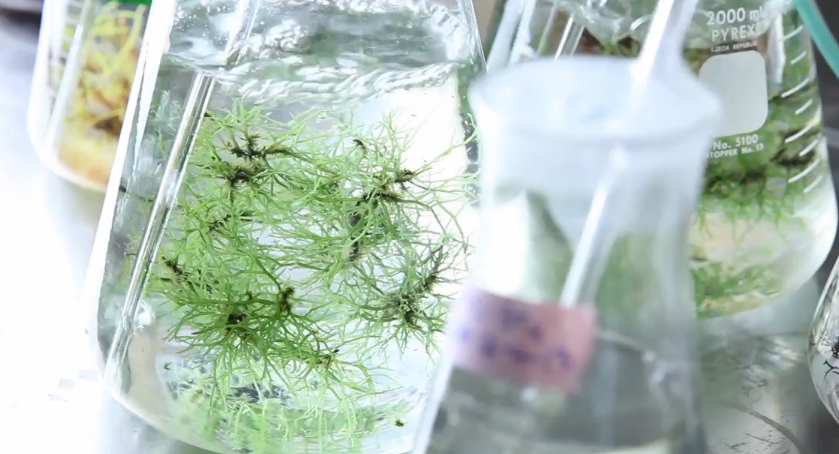 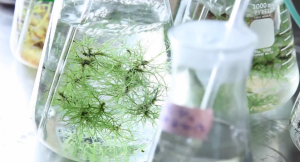 Bren Smith, owner of Connecticut-based Thimble Island Oyster Company, and director of the organization Greenwave started growing kelp and shellfish as a reaction to several crises he faced in his own life: overfishing, climate change, and rampant unemployment in the fishing industry. He was working on the Bering Sea when the cod stocks crashed, and he lost oyster crops to both ocean acidification and two hurricanes.

Based in part on the research of Dr. Charles Yarish at the University of Connecticut, Smith’s 3-D ocean farming model uses the entire ocean column to grow as many different foods as possible in as small an area as possible. “I’m growing more food in 20 acres of ocean now than I was in 100 acres a few years ago,” he said. Oyster cages mark the sea floor, and curtains of kelp sprout along lines suspended by surface buoys. Mesh containers housing scallops, clams and mussels hang among the long kelp leaves. All of these species extract nutrients that leech into the water from land-based agricultural runoff (a significant contributor to ocean dead zones),  and that’s central to Smith’s approach.

His work with Greenwave is aimed at jump-starting a “blue-green” economy: identifying restorative species in any given ecosystem that make the oceans healthier, that are nutritious, delicious, and economically viable. This is an “elegant solution,” to some of the problems inherent in our current food system, Smith said.

Indeed, solutions are needed. Menus of Change (MOC), a meeting hosted by the Culinary Institute of America and the Harvard School of Public Health, highlighted the need for reforming the way we produce food. The MOC annual report pointed to a “perfect storm” of problems associated with industrial food production, including challenges like depletion of arable land and fresh water, antibiotic resistance, drought and other extreme weather associated with climate change, food insecurity, and obesity. A 2011 report from the Food and Agriculture Organization of the United Nations identified the global food production sector as one of the most significant drivers of climate change, consuming about 30 percent of the world’s total energy consumption, and producing over one-fifth of its greenhouse gas emissions.

One session at MOC explored the potential of underutilized sea foods, and the promise of ocean-based food production: it requires no fresh water, no land, and if done properly can actually mitigate climate change, rather than contribute to it. But there are challenges: Panelist William Bradley described unsuccessful attempts at serving sea vegetables to visitors to the New England Aquarium, where he acts as Executive Chef. Another panelist, Chef Bun Lai has had some success in his restaurant Miya’s Sushi, but he pointed out that many Americans are still simply unfamiliar or uncomfortable with the idea of eating plants from the sea.

Bren Smith hopes this will change, and has been working with Chef David Santos at Louro Restaurant in New York to develop innovative ways to prepare sea vegetables. The possibilities are endless. Kelp leaves cut into strips make a perfect al dente noodle; pickled kelp stems are crisp, flavorful and refreshing; kelp butter makes a unique but mild and rich spread; and a simple plate of kelp with a bit of sweet sesame dressing gives any fancy kale salad a run for its money.

“It just make sense that this would be the next super-food,” said Santos, pointing to kelp’s healthfulness, environmental impact, and diversity of uses and flavors.

There are many reasons that sea farming like Smith’s model may be a key component in the way we think about the future of food production, as described in a recent report by Business Insider. Menus of Change focused on solutions that support health, sustainability, and economics. But at the end of the day, these solutions also have to be delicious.  Smith’s 3-D farming fulfills all of those criteria, and shows that similar approaches can be viable.

“I think what’s kind of exciting now, is because we’ve screwed things up so badly, because our backs are against the wall, we have to innovate. I mean all over the world we need to come up with answers in order to really change our relationships to the oceans, and reformat the economy, and that’s where a lot of my hope comes from, and where a lot of the excitement comes from, because we have to do something, and  I think that’s going to cause a lot of creativity, resilience, and solutions,” he said.

But those solutions will only work when we as consumers are ready to step up and embrace new foods and new ways of eating. So go get yourself some kelp and bon appétit.

This post was originally published by Scientific American, Inc.

Patrick Mustain is a Communications Manager at the Yale Rudd Center for Food Policy and Obesity. He is interested in how environmental factors (built, social, media, economic, etc.) affect health behaviors and outcomes, especially those places where media and public health intersect. You can find more of his work at his website. Follow him on Twitter @patrickmustain. Read more >