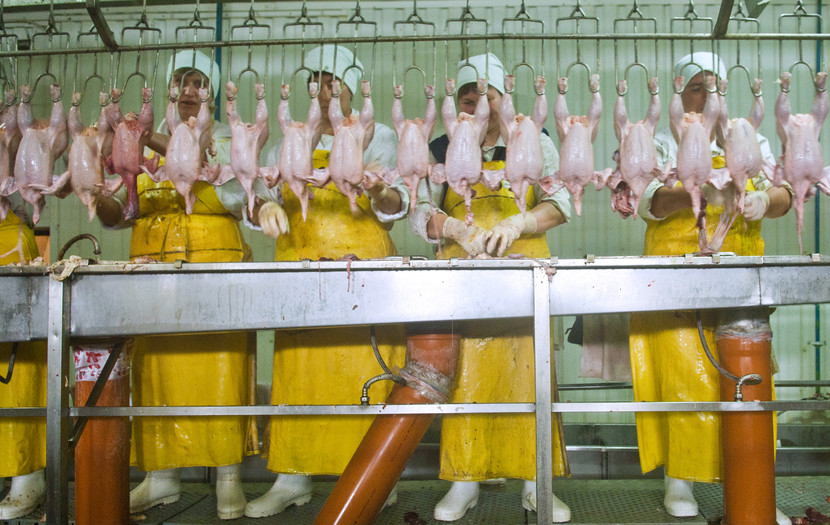 It’s summer, but that doesn’t mean food news stops. Below, we share some of the top news stories of the week.

After more than two years of proposals and push-back by advocates, the U.S. Department of Agriculture (USDA) moved to put new poultry inspection rules in place yesterday. The voluntary rules would result in companies providing their own inspectors (while keeping one from the USDA in every plant), making it essentially a move to privatize the inspections. It will also mean fewer inspectors per plants, with each inspector looking at 140 birds per minute. Advocates at groups like the Center for Science in the Public Interest (CSPI) and Food and Water Watch (FWW) are calling it a major defeat for food safety. According to FWW, “the one USDA inspector left on the slaughter line under this new rule will still have to inspect 2.33 birds every second–an impossible task that leaves consumers at risk.”

2. General Mills Joins Climate Fight and Requires Pledge from Suppliers, Too (The Guardian)

For two months, corporate watchdog Oxfam has been putting pressure on food companies to take a hard stance in the fight against climate change. General Mills, one of the largest food corporations in the world, has apparently gotten the message. The company, which markets food under brands like Nature Valley and Pillsbury, has released a climate change policy that focuses on reducing greenhouse gas emissions throughout the supply chain. General Mills points out that the vast majority of the organization’s environmental impact occurs on farms and processing facilities and as a result, their climate change mitigation strategies will target “upstream agriculture.” Notably, the policy sets a goal of “sustainably sourcing our 10 priority ingredients by 2020, representing 50 percent of our total buy” and emphasizes their commitment to work with farmers and producers across the globe to better prepare for climate change. General Mills also argues that smart government policies are crucial to fight the effects of global warming, but has not yet laid out a specific advocacy strategy on climate change. Meanwhile, Oxfam will continue to put pressure on other large food retailers to follow in General Mills’ path, starting with rival company Kellogg’s.

This year’s corn crop in Brazil is falling victim to an unlikely pest: the corn leafworm. This comes as a surprise to farmers, who were promised that the GMO seeds would stave off just such an infestation. But, the pest has apparently adapted and no longer dies from eating Cry1F, the key protein engineered for pest control. (North Carolina corn farmers reported in 2013 that the fall armyworm had also developed a resistance to the gene.)As a result, corn farmers have had to spray two to three layers of expensive pesticides on their crops just to hold on to their harvests. Now, they are hope to seek reparations for the cost of pesticides from the biggest players in the agro-chemical industry—Dow, DuPont, Monsanto, and Syngenta. These agribusinesses claim to have offered advice on preventing resistant leafworms, but Brazilian farmers retort that they have received little to no technical assistance. Brazil’s corn production is down this year and prices have fallen due to oversupply.

Country of Origin Labeling (COOL) earned a win this week as the U.S. Court of Appeals rejected the meat industry’s claims that labeling laws violate their First Amendment rights. Under COOL, the U.S. Department of Agriculture (USDA) requires that companies disclose the source of certain foods based on the notion that consumers have a right to know where their food comes from and make decisions accordingly, such as in the event of a recall. Final rules for COOL in the meat industry were released in May 2013 and went into full effect in November last year. Meat producers and industry groups have been fighting the provisions, arguing that COOL denies free speech by forcing companies to release information against their will. The recent ruling undercuts this argument and further stokes the debate in the courts on whether consumer knowledge or corporate interest holds greater weight. Members of the meat lobby are expected to challenge the ruling, which has the potential to reach the Supreme Court.

With the global population expected to reach 9 billion by the year 2050, there has been much debate about how to feed so many people, particularly as climate change threatens crops from the American Midwest to the Sudanese Savannah. Big Ag has long argued that the key to ensuring that everyone has enough to eat is to put more land into agricultural production to ensure greater yields. But new research suggests that we can do more to protect our crops by fighting climate change, not cutting down forests. Researchers from the Massachusetts Institute of Technology (MIT) have found that increased levels of ozone, a form of oxygen that is harmful to plants, have a substantive effect on crop health. Their findings suggest that promoting stricter air quality regulations could reduce major global drops in the production of four staple crops—rice, wheat, corn, and soybeans. Last month, the Supreme Court handed the Environmental Protection Agency (EPA) a mixed bag when it ruled on a case regarding the agency’s authority to regulate greenhouse gas emissions. While the decision said nothing about ozone and other air pollutants, EPA’s ability to promote strong air quality standards looks tenuous at best.

Paraguay is home to the second largest and most significant forests in South America, the Gran Chaco. The 250,000 square miles it covers are host to rugged, fertile soils and plant and animal species that are crucial for the continent’s ecosystem. As analysts and environmentalists strive to learn more about the role the Chaco plays in sustaining environmental health in South America, huge agribusinesses are swooping in to convert the forest into agricultural land. With fewer advocates urging preservation of the Chaco like they do with the Amazon, big U.S. ag companies like Cargill, Bunge, and Archer Daniels Midland have been able to convert 2.5 million acres of forest into soybean fields. The farmers and ranchers that once relied on the Chaco for their livelihoods are being forced out, as the companies clear the forest at a rate of 1.6 square miles a day. The alarming (and quickening) deforestation of the Chaco continues despite the fact that companies like Cargill are attempting to rebrand themselves in the name of corporate sustainability. Research teams studying the deforestation rate in the Chaco point out that Cargill prides itself on conservation only when it knows other people are looking, as in the Amazon.

Federal lawmakers are pushing for legislation that would require the GMO labeling debate to remain a federal issue and Big Food is pouring money into lobbying in support for the measure. The Safe and Accurate Food Labeling Act, introduced by Rep. Mike Pompeo (R-KS), essentially limits states’ abilities to pass GMO labeling laws by placing labeling solely under the Food and Drug Administration’s (FDA) jurisdiction. Pepsi, Coca-Cola, and the Grocery Manufacturers’ Association spent nearly $10 million on lobbying in the first quarter of 2014, likely to push the Pompeo bill through the House. This move comes in the wake of a successful effort to pass a GMO labeling law in Vermont (though Big Food is now suing the state), while proponents of labeling continue to promote legislation in states like Oregon and Colorado.

Those in favor of keeping GMO labeling a federal issue argue that doing so would ensure that businesses and producers wouldn’t have to jump through complicated regulatory hoops depending on what state they were in. However, those who oppose the Pompeo bill point to FDA’s toothless history of requiring businesses to keep their customers informed and argue that voluntary labeling requirement would likely do little to increase the American public’s knowledge of what’s in their food. Approximately 93 percent of the U.S. population supports GMO labeling.

This four-part series looks at the changing ecosystem in the Great Lakes, spawned by the construction of the St. Lawrence Seaway in 1959. The manmade channel allowed large ocean freighters and other commercial ships to navigate the St. Lawrence River and into the Great Lakes, bringing with them a host of plant and animal species from waters all over the globe. These newcomers typically stowed away in the ships’ ballast tanks, which crews often empty when traveling through shallow waters requires ships to shed some extra weight. The ships that have made their way to the Great Lakes since the mid-20th century have brought 56 invasive species to their depths, wreaking havoc on the lakes’ complex ecosystems. The contamination of the Great Lakes may finally come to an end, however, as a federal judge recently issued a ruling that requires EPA to enforce decontamination of ballast water from all ships entering the waterways.

Former New York Times food critic Ruth Reichl wrote an op-ed condemning the FDA for its failure to protect the American public from antibiotic resistant bacteria in our meat supply. The U.S. Circuit Court of Appeals handed down a ruling last week that allows FDA to keep harmful antibiotics on the market in the livestock and poultry industries, even if the agency itself named the products dangerous in the first place. There is mounting concern among scientists who fear that continuous, prolonged use of antibiotics to fatten up cows, pigs, and poultry could lead to superbugs with potentially devastating consequences for people. Indeed, Reichl points out that nearly 2 million people in the U.S. become sick each year due to antibiotic-resistant infections and that 23,000 people die due to such illnesses according to the Centers for Disease Control and Prevention (CDC). She writes: “While the F.D.A. continues to drag its feet, it’s time for cooks and consumers to step in. We can play an important, proactive role in protecting against superbugs by changing the marketplace. Insist that your supermarkets stock meat and poultry raised without antibiotics. Demand that your restaurants do the same.”

Did we miss any stories you thought were important? Please share with us below.