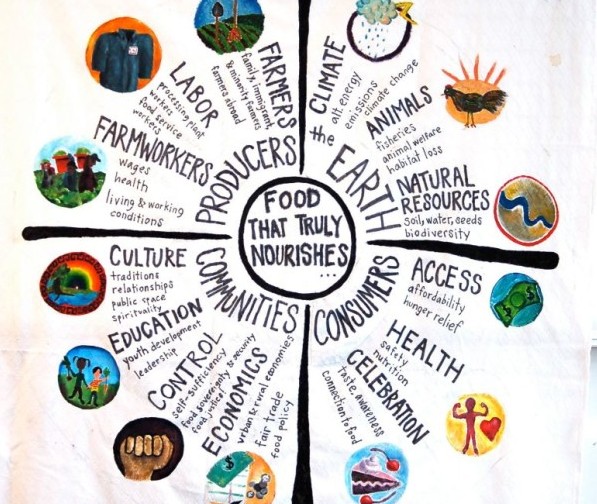 It’s rare that a university system commits to solving a social issue on a global scale. That’s why the University of California’s recently announced U.C. Global Food Initiative could mark a critical moment in the history of world food production. If the initiative unfolds as promised over the next few years, it “will align the university’s research, outreach and operations in a sustained effort to develop, demonstrate and export solutions—throughout California, the U.S., and the world—for food security, health, and sustainability.”

While the food movement has a strong history at U.C., the Global Food Initiative signals a shift to all-hands-on-deck. “We are in a food crisis,” said U.C. President Janet Napolitano at the Initiative’s unveiling in early July. She called on U.C.’s 10 campuses, the University’s agricultural division and the Lawrence Berkeley National Labs to develop ecological, nourishing solutions that will feed a world population soon to hit 8 billion.

In the short term, the U.C. system is looking at food on a more local level, starting with its own campuses. The Initiative’s first phase starts with a deep review of the University’s efforts to support sustainable farming practices–from the food served in dining halls to the success of student gardens.

One of the most powerful ways to build a healthier food system might just be the U.C. grocery bill. As the 10 campuses unite to reconsider their purchasing policies, a system-wide Sustainable Food Service Working Group will oversee the process. The latter formed in 2009 after 10,000 students wrote postcards to the Board of Regents demanding more sustainable fare. That same year, U.C. signed on to the national Real Food Challenge pledge, agreeing to serve 20 percent “real food” by 2020.

Tim Galarneau, who co-founded the Real Food Challenge while a student at U.C. Santa Cruz and now serves as the Community-Engaged Education Coordinator at CASFS, says the group defines “real food” as “local, community-based, economically fair, ecologically sound, and humane.”

Some U.C. campuses are aiming beyond the official 20 percent target. At U.C. Santa Cruz the goal is 40 percent real food before 2020. Meanwhile, Danielle Kemp, Dining Services Dietitian at U.C. Santa Barbara, says at least 26 percent of UCSB produce qualifies as both local and sustainable.

But as colleges around the country have found, buying from independent farmers can be a logistical challenge. Regardless of student demand, most small-scale growers can’t consistently supply food in huge quantities at an affordable price.

Galarneau says that he’s hopeful that the Global Food Initiative can balance the passion of student advocates with the feasibility concerns of administration. In the coming months, school representatives will map best practices across the 10 campuses, with the ultimate aim of giving other schools a head start.

“There weren’t many models to learn from when we began our program,” says Kemp. “Every region is unique, having their own diversity of crops and methods of distribution, so we were really starting from scratch.”

Most college foodservice programs rely on corporate distributors like U.S. Foods, which annually racks up $19 billion-dollars in revenue and uses a high-tech, online database to source ingredients from around the world. Companies like that can send a delivery truck the very next day, but a single farmer usually can’t provide instant turnaround, much less at the high volume required by campus cafeterias.

U.C. Santa Cruz addressed their supply problem by partnering with The Agriculture and Land-Based Training Association (ALBA), a Monterey County, California co-op that trains and distributes product for dozens of small-scale organic growers. The co-op approach keeps prices down, but better quality food still tends to be more expensive than industrial offerings. And so far, the U.C. Global Food Initiative has not pledged any additional funds for Dining Services. (The Initiative’s only new money, $7,500 per campus, is tagged for student projects.)

Professor Daniel Press, executive director of CASFS, hopes that the Initiative doesn’t become an excuse to nickel and dime growers. “It’s important that the so-called ‘power of 10’ results in procurement practices that make conditions better for growers, not that it simply means the U.C. schools will get a better deal,” said Press. He adds that farms who are known for treating their land and their workers well should be able to turn to U.C. as a partner. “They should be able to plant their crop and expand production, knowing that U.C. is there at the other end with a long-term contract. Now that’s a game-changing policy.”

Although students across the U.C. system asked for sustainable food, at UCSB, Kemp remembers that some students (and staff) were surprised when the new food actually came to the table.

“We had to win acceptance for farm-fresh products that weren’t necessarily uniform in size or appearance [like industrially-produced ingredients],” she says. In other words, “real” carrots aren’t always perfectly round and chiseled by a machine to be “baby-sized.” And a “real” apple might have a spot on its peel because it wasn’t doused with fungicides.

“We had to educate our students and staff,” she says.

At U.C. Berkeley, some students argue that the best kind of education happens in the dirt. That’s why they appeared at a July Regents Meeting, asking President Napolitano to “walk the talk” and halt construction of a vacant lot adjacent to the University-owned Gill Tract Farm.

The Farm itself is used by students and faculty to grow produce and conduct agricultural research. In theory, the 10 empty acres next door to it could be put into food production, too, but the University has slated them for a grocery store and a senior assisted living center. Student protestors claim that developing arable land flies in the face of the U.C. Global Food Initiative.

“U.C. has grand ideas, but if they want those grand ideas to flourish, they need to engage students and professors. They talk about sustainability, but then they want to pave over a farm,” says Vanessa Raditz, a U.C. Berkeley Master of Public Health Candidate. “The U.C. Global Food Initiative can’t just be rhetoric.”

In its defense, the University says that the decision to build on the site was made after 7 years of discussion with the community.

“There was ample opportunity for students to get involved. But we don’t have the luxury of making just one group happy,” says Dan Mogulof from the U.C. Berkeley Office of Public Affairs. The University lost 50 percent of state funding to budget cuts and the new revenue from commercial rents will subsidize much-needed low-income student housing, as well as the University’s urban farming program.

“We’ve tried to find a compromise between the needs of our low-income students, Albany residents and urban farmers,” says Mogulof. “In my mind, this is a win-win-win.”

Whether or not that’s true, the Gill Tract debate shows just how many interests are at stake within the University on the issue of food and farming. At its most successful, the U.C. Global Food Initiative may never design one sustainable model to beat the rest. But then again, monocultures never did anyone any good—in agriculture or ideas.