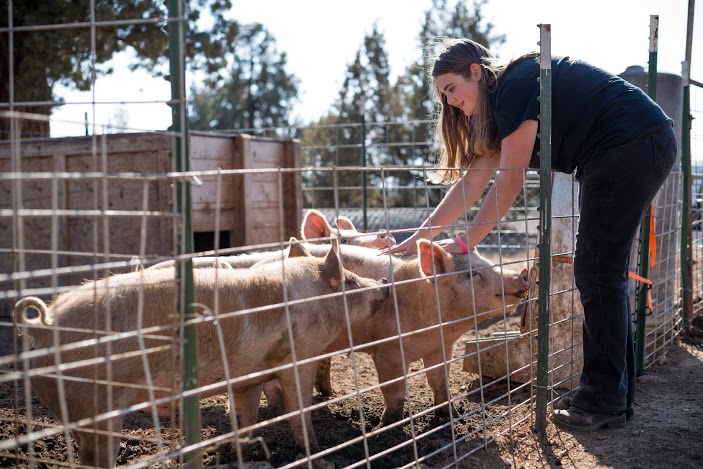 At 7:15 on a Friday morning in a large, culinary classroom at Bend High School, 25 energetic students dressed in crisp, white chef coats begin breaking down two half hogs. Over the next two hours, working in teams, the students will separate the animals into primal cuts — shoulder, loin, belly, and leg — and then into smaller cuts. “The kids can now visualize where their meat comes from,” says Molly Ziegler, the culinary teacher at Bend High School, “and they are learning how to utilize lesser known cuts, or cuts that would often get tossed.” After class today, the students collected bones with tiny scraps of meat to make a simple soup base. “I just took it off the heat,” says Ziegler. “It’s been simmering all day.”

Tomorrow the students will eat the soup in class, sparking conversations ranging from the benefits of nose-to-tail cooking to the nutrition found in bone broth. Class cooking projects span humble stocks and sauces to more haute cuisine. Most recently, slow roasting pork tenderloin was part of a homework assignment. And the source of their pork? Mountain View High School, less than a mile away, where FFA (formerly known as Future Farmers of America) students are raising pigs.

These classes are complementary components of an integrated farm to school program at Bend-LaPine School District, where 29 schools serve more than 16,000 students. Bend-LaPine has students raising animals, butchering animals, and feeding a school meal program. Neatly wrapped packages of pork move from classroom to school kitchen, where they are cooked into succulent carnitas for all 29 school cafeterias.

The program breaks the normal bounds of food in school and has created a whole new arena for students to learn. “It’s a full circle agriculture education experience,” says Katrina Wiest, the manager for the Bend farmers’ market and wellness specialist for the school district.

“Agriculture is a big part of my life,” says Wiest, who was raised on a wheat farm and is married to a farmer. “I feel it’s important that kids know where their food comes from.”

For close to ten years, Wiest has been pioneering the farm to school movement in the high desert of central Oregon: sourcing local food for schools and providing agriculture, health, and nutrition education opportunities in the cafeteria, classroom, and community.

She is known for her “vivaciousness and contagious energy,” especially when it comes to feeding students, says Michelle Ratcliffe, PhD, farm to school specialist for the Oregon Department of Agriculture. “She’s able to articulate the big picture about the benefits for kids’ health, education, the economy, and the environment. She knows it, and she can rally people around that.”

After researching the cost of butchery for FFA-raised hogs, Wiest and her colleagues asked: Why not just do it ourselves? Last year, when the Oregon Legislature awarded nearly $1.2 million in funding for local food and education in schools, Wiest put forth a proposal for a partnership between the Bend-LaPine District Nutrition Services Department and Mountain View High School. The district was one of nineteen to receive this second round of competitive Farm to School and School Garden grants. It’s the only grant focused on the entire life of a livestock animal, from piglet to plate.

From Classroom to Cafeteria 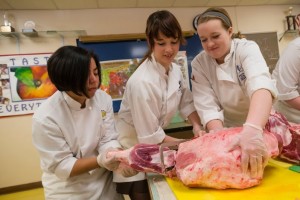 As part of the educational component of the grant, Wiest brought in Camas Davis from Portland Meat Collective to teach the food service staff, culinary teachers, and students how to butcher. And the district invested in a smoker.

Tracie Gleffe is the executive chef at Bend-La Pine Nutrition Services. She heard about Davis guest teaching, and immediately looked forward to the collaboration between the culinary class and school kitchen. “The butchery class got us all excited about the program,” she says.

When Gleffe gets a call that hogs are coming in, she reaches out to Ziegler and asks if her class can take it on. “It’s giving us all an opportunity to learn something new,” Gleffe says of the program that’s branching out and pushing boundaries. “We’ve chosen a different route,” she adds. “It takes a little bit of risk to do that, but the growth because of that risk is so much higher.”

At the made-to-order taco and nacho bar in the bustling cafeteria at Bend High, students can stuff whole-wheat tortillas and top baked tortilla chips with house-smoked carnitas. The carnitas ingredients are simple: a little bit of salt and the pork shoulder. The secret to the flavor is the smoker.

“We smoke every cut of meat that we get for a good four to six hours,” says Gleffe. “Then we finish it off in our steamers,” she says, “and that’s how we keep the rich flavor and tenderness.”

The New Farm to School

“Farm to school programs like the one in Bend-LaPine are teaching students about where food comes from, how it’s grown, and connecting them with their farmers,” says Stacey Sobell, farm to school manager at Ecotrust, which publishes Edible Portland. “We’re raising the next generation of consumers and decision makers, and we want them to not only grow into healthy adults, but to grow into thoughtful, informed adults.”

The school district currently uses more than 30 percent of their budget to buy local product for their meals, which translates to farm-fresh ingredients and more made-from-scratch meals. The district also forges relationships with nearby farmers, feeding the local economy. At peak season, which runs from September to November, Gleffe staffs one person every Wednesday to work with the farmers when they stop by, unloading trucks and filling carts with freshly picked produce for each of the 29 schools.

“We get so much fresh product in fall, you have to think, what can I do with it later?” says Gleffe. Peppers are roasted, peeled, and frozen. “We add them to our creamy tomato-basil soup for extra flavor,” says Gleffe.

Wiest views the program as a big-picture change agent. “We are putting Oregon dollars back into Oregon agriculture. We are saving farms. That’s what it comes down to,” she says. “It makes so much sense to start in the schools. These are our future farmers right here.”

The Bend program offers a window into much larger systemic changes that are needed and possible in the regional food system. “Public schools have enormous collective purchasing power,” says Sobell, “and because they reach all students, no matter their income level, they have enormous potential to create positive change. Challenges still exist; we need to grow the number of mid-size producers in our region who are able to supply schools and other institutions, and we need to build up our infrastructure, so that aggregation, processing, and distribution on an institutional scale are feasible.”

By taking pork from the school farm to the cafeteria, these students are learning about the challenges and rewards of a transparent food supply chain. They are meeting and collaborating with all of the people who participate along the way. Although working at a much smaller scale, if the students and staff in Bend are any indication, positive changes are on the way.

An earlier version of this piece ran in Edible Portland.