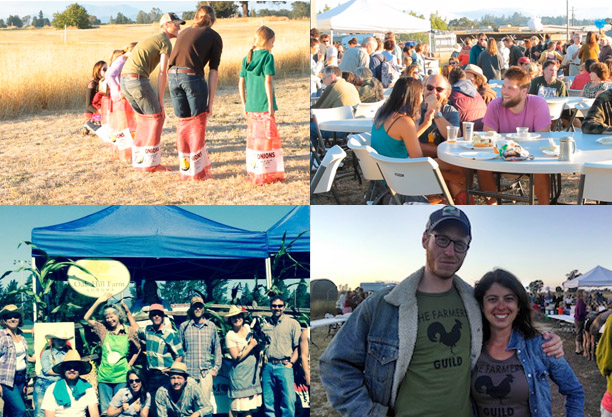 If you find yourself at a Farmer’s Guild meeting, you’re as likely to find a date as you are a tractor. With seven chapters across Northern California, the Guild has become the “it” destination for agrarians looking to mingle. Small farmers and farm-curious folks arrive at these once-a-month gatherings to swap planting tips and talk rural life over beer and a homegrown potluck. The Guild is half party and half knowledge exchange. And it’s entirely about face-to-face connections at a time when most social networking has lost touch with its in-person origins.

“Conventional agriculture is mechanized and industrialized. You buy inputs from one company and sell to another,” says Evan Wiig, the Guild’s Executive Director. “But in sustainable agriculture, you need to develop relationships with so many more people than that and not just by signing contracts. You have to reach out to your neighbors, to chefs, and even to media who want to help you tell your story.”

It was just over two year ago when Wiig and his ranchmates at True Grass Farms in Sonoma County started inviting their friends over for Meatloaf Mondays.

“Farmers aren’t always social butterflies, and rural communities can be isolating,” he says. “I wanted to find a way to bring people together.”

Wiig and his crew were trying to grow crops sustainably, whether that meant pesticide-free vegetables or pasture-raised beef. The scene at dinner was a little like college freshmen asking each other directions to class and where to buy books, except as new farmers they wanted to know how much feed to give their chickens and if anyone could recommend irrigation equipment.

What started out as a crowded kitchen table quickly became an event that dozens of men and women were driving long distances to attend. And right around the point when the ranch house couldn’t fit any more guests, the Guild itself was born. Today it has matured into a nonprofit with locations as far north as Mendocino, as far east as Nevada City and with more chapters soon to debut in Southern California.

Everyone—from farmers to city-slickers—is welcome. You don’t need authentic pig sludge on your boots to get involved, nor do you have to be a brawny twenty-something wearing flannel.

“Younger farmers show up with new ideas and energy,” says Tiffany Nurrenbern, the Farmer’s Guild Project Director, “but older farmers bring real knowledge. The two need one another. We want the generations to mix.”

Hanging somewhere at every Guild meeting is a white board with two columns marked “I need” and “I have.” In what is essentially a rustic version of Craig’s List, attendees can post skills they want to learn, mechanical equipment they have to sell, or a service they’d like to offer.

“We want the Guild to be the kind of place where one farmer can make a mistake or search for a solution so the rest of the group doesn’t have to,” says Wiig.

Before joining the Guild, Nurrenbern spent years working with other agriculture advocacy groups that struggled to engage growers. Farmers aren’t generally the sit-in-front-of-the-computer type, so the online surveys or webinars that many organizations put out often aren’t the best way to capture a farmer’s attention. But enticing a farmer to trek to town in the middle of the day for a dry workshop on financial planning isn’t any easier.

“Most organizations try to get farmers to come to them, instead of going to farmers,” Nurrenbern says. “That’s why the Guild invites outside organizations to our meetings so that they can connect with farmers where they’re already comfortable.”

The Guild recently created a scholarship fund with several partners, including the University of Santa Cruz Center for Agroecology and Sustainable Food Systems, the Center for Land-Based Learning and the California State Grange School, to support farmers who want additional training.

Around the country, other organizations, like the National Young Farmers’ Coalition, share the Guild’s populist approach. As they succeed, it’s clear that progress doesn’t necessarily require high-tech solutions. Wiig says that he was inspired by the National Grange movement, which since the 19th Century has banded farmers together to fight everything from railroad barons to GMOs. The Grange had been in decline in recent decades, but it’s seeing a revival, in part by opening its doors to fresh-faced groups like the Farmer’s Guild. Five Guild chapters now meet in Grange halls, where members from both clubs can learn from one another.

“One hundred and fifty years ago, the National Grange was like the Occupy Wall Street of farming,” says Wiig. “They realized that they would have more success connecting with their own communities than they would trying to talk to the government or make progressive change alone. Our Guild has the same spirit.”

It’s with that spirit that the Guild launched their Free Farmer campaign on July 4, calling on farmers to tell the world what would help liberate them from the pressures of industrial agriculture—from corporate contracts that leave farmers broke to customers who expect seasonal, local, organic food at Wal-Mart prices.

By finishing the sentence “A free farmer ______,” growers across the country are standing up for what they value. To some, a free farmer can afford to buy land. To others, a free farmer doesn’t have to navigate convoluted regulations. Whatever the answer, Wiig believes that revolutionizing our food system depends on farmers having their own voice.

“Most of the time, when farmers speak to the public, they speak through other representatives like the Farm Bureau,” he says. Many sustainable farming advocates argue that the Farm Bureau is in bed with corporate agribusinesses like Cargill and Monsanto and has largely abandoned smaller growers. To Wiig, “The Farmer’s Guild creates a space where farmers can speak for themselves and amongst each other.”

To find a Farmer’s Guild near you or to inquire about starting a chapter in your town visit the Guild’s website.