‘We the Eaters’: Ellen Gustafson Wants to Change Dinner and the World | Civil Eats

‘We the Eaters’: Ellen Gustafson Wants to Change Dinner and the World 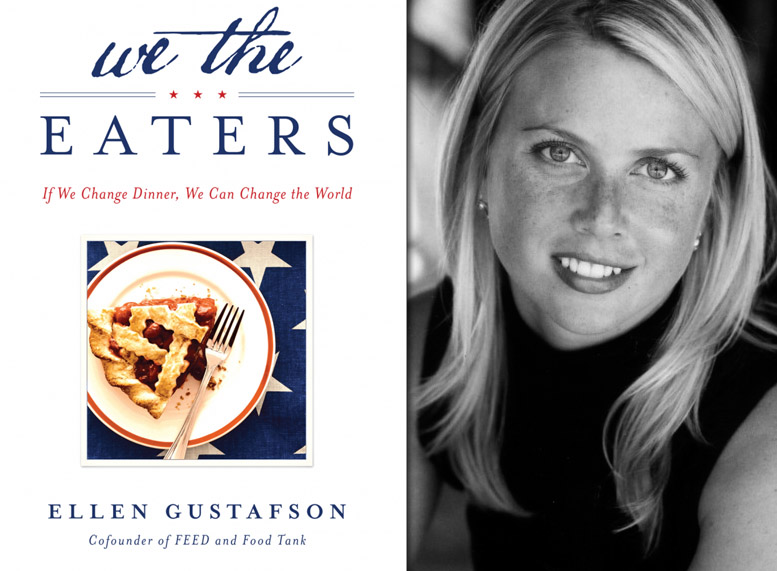 Ellen Gustafson’s We the Eaters: If We Change Dinner, We Can Change the World, may have a clumsy title, but the book takes a trenchant and well-researched look at America’s high tech farming and the denatured food it produces. The food activist goes further, by laying out how processors take that food and fill it with sugar, fat, salt, and additives while draining out the nutrition.

And Gustafson goes further still, describing how fast food corporations and junk food convenience stores are muscling out indigenous farming practices and wholesome food not only in our country, but around the world. Developing nations are getting a double whammy, she says, as nutrient-deficient junk food creates growth-stunting hunger in children, and she documents how this results in obesity later in life.

She knows whereof she speaks. Gustafson is the co-founder of Food Tank (a food think tank) and FEED projects. She was previously a spokesperson for the UN World Food Programme and she has seen the dire results of this harmful food system up close in countries like Uganda and Guatemala.

To make her points, Gustafson penetrates deeply into the creation of the typical fast food meal–a sugary soft drink, a hamburger on a white bun, and fried potatoes–and details the disastrous effect it has along the way. She writes: “Almost every step of the industrial meat supply chain degrades someone or something: the cows, the land, the farmers and industry workers, the consumers, and the communities these industries operate in.”

The book reveals how changes in our eating habits over the past 40 years mirror the growth of the fast food industry. For example, from 1970 to 2011, the consumption of fresh-from-the-market potatoes decreased by over a third, while consumption of processed potatoes increased by nearly 30 percent.

“The fast food industry and companies like Heinz basically took the nutritious potato and the nutritious tomato and made them into a fat, salt, and sugar delivery system called French fries with ketchup,” Gustafson writes.

For part of the book, Gustafson critiques the political, economic, and social effects of the industrial food system, much like Marion Nestle’s Food Politics, Raj Patel’s Stuffed and Starved, and Eric Schlosser’s Fast Food Nation. But the most interesting parts of the book recount her discoveries in areas of hunger and malnutrition.

In Uganda, for instance, Gustafson visited an area of extreme poverty and malnutrition. She expected to find a lack of food, but instead found stores with plenty of white bread, donuts, pastries, and cookies, lots of Coca-Cola, and candy. “Somehow,” she writes, “Our massive snack and drink companies had figured out how to get their processed corn, soy, wheat, and sugar products to those at the farthest reaches of extreme poverty, even as distribution of good quality, nutritious food remained an insurmountable problem.”

Yes, the book is polemical, but that’s not its sum total. Gustafson goes on to say that we in the United States don’t have to forgo hamburgers, we should just make them ourselves from wholesome ingredients.” A cheeseburger on a bun…can either be the worst meal on the planet…or the meal that will change everything.” The book’s last section is recipes for making the typical fast food meal from high-quality, organic ingredients.

The problem, as Gustafson sees it isn’t the menu; it’s Big Ag’s approach to selling cheap and highly processed food, ringing up billions in revenue while paying its low-tier workers a pittance.

How does Gustafson recommend wresting control of the food supply away from Big Ag?

Combine high-level advocacy with grassroots capitalist pressure on companies…by shifting what we buy [and] using our food choices to nudge the system in the direction we want it to go. As an example, we are more likely to be able to effect change in U.S. corn policy if we move our collective dollars away from corn-based products. Sustainable farmers and healthy food entrepreneurs need our support as consumers, but they also need a more fair and level marketplace to operate in, so shifting the priorities of government food policy and changing what is on our plate go hand in hand.

The book’s concluding chapter lays out 30 “action steps” for making more conscious choices that lead to better health of every system in the food chain, from the farm to the consumer.

A few examples:
“Rethink the idea that healthy food costs too much.”
“Don’t buy or drink commercially produced soda. Ever.”
“Eat high tech but low impact,” meaning look for foods with QR codes that let you meet the farmers who grew them.

Gustafson backs up the entire book with a truckload of references. It’s a good piece of investigative journalism.

Jeff Cox is the author of 20 books on organic gardening, food, and wine. He's hosted 'Your Organic Garden' on PBS, was managing editor of Organic Gardening magazine, and writes the science column for each issue of Horticulture magazine. Read more >