All the News That's Fit to Eat: Plus for Organics, Food Hubs, and a School Food Snub | Civil Eats

All the News That’s Fit to Eat: Plus for Organics, Food Hubs, and a School Food Snub 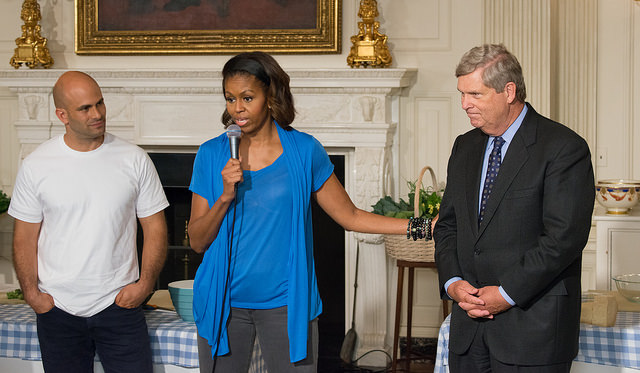 Here’s what caught our attention this week in food news.

People choose to eat organic for a host of reasons: to avoid pesticides, to preserve the environment, to protect farmworkers, and, of course, to be healthy. There has been considerable debate, however, about whether organic foods really boast greater health benefits than conventional foods. A study from Newcastle University in the U.K. gives a serious boost to the argument that organic foods are healthier for consumers. The research team analyzed 343 existing studies pitting organic and conventional foods against each other–the largest meta-study on this topic to date–and found a statistically significant difference in the levels of antioxidants and pesticides between the two categories. The study stops short of making bold, causal health claims about these findings, but it does emphasize a link between higher levels of antioxidants and positive health outcomes. Furthermore, organic fruits and veggies carry significantly less pesticide residue than conventional produce. According to EPA’s most recent estimates, over 850 million pounds of pesticides are used in conventional agriculture each year. In addition to environmental threats, from air and water pollution to illnesses in animals species both on and off the farm, pesticides are dangerous for human health, particularly among farmworkers. While the antioxidant question promises to reignite debate about the nutritional benefits of organic foods, it’s clear that reduced pesticide use is a health benefit for all.

You may recall that earlier this summer, tensions were running high between the White House and House Republicans over a proposal to allow school districts to opt out of healthier nutrition standards for school meals. Now, it appears that the debate has driven a wedge between White House Chef Sam Kass and members of the School Nutrition Association (SNA), the organization that led the fight for the exemption. Kass, who spoke at SNA’s annual convention in 2012, was denied a spot on the speakers’ list for this year’s meeting in Boston. In fact, SNA’s CEO stated that she “felt it was best he not come” at all. Perhaps Kass’ absence was a boon to an East Wing looking to distance itself from poor nutrition. With cameo appearances from the Pillsbury Doughboy and Chester the Cheetah of Cheetos fame, the SNA convention is starting to look more like a junk food carnival and a publicity stunt for Big Food than a serious forum for discussion on how best to nourish our kids.

Local foods are finally breaking out of the farmers’ market scene. Large institutions like schools and hospitals are increasingly taking advantage of food hubs, or entities that bring together food from a network of regional farms, to meet their high food demands. With help from the U.S. Department of Agriculture (USDA), food hubs are able to connect with buyers looking for bulk produce. These linkages cut out the middlemen and allow farmers to enjoy a greater share of the profit from their sales while institutions gain easy access to fresh, high quality local foods. The trend toward farm-to-institution relationships can reinvigorate rural economies, a key priority of USDA, and encourage much-needed improvements in food system infrastructure.

A group of entrepreneurs in the Pacific Northwest may have found the most compelling organic crop management tool yet: birds of prey. Falcon Force, a unique pest management company based in California, visits Washington’s berry fields each year to unleash falcons and Aplomados into the sky to scare off smaller birds munching on fruit. The falcons carry tracking devices and have been trained to return to their handlers, but for the most part Falcon Force simply relies on the birds’ natural instincts to kick in, with falcons swooping in on pest birds and the latter scattering in fear. The technique is rare, with very few master falconers involved in agriculture, but provides farmers with a low-cost, environmentally friendly way to protect their crops.

After two years of drought, farmers in the Mexican state of Chihuahua were optimistic that this year’s lush apple crop would finally result in a profit. Unfortunately, an influx of cheap U.S. apples has flooded the marketplace in Mexico, with many apple growers still struggling to make ends meet. Mexican farmers are blaming their competitive disadvantage in part on the North American Free Trade Agreement (NAFTA), which went into effect 20 years ago. NAFTA eliminated trade tariffs between the U.S. and Mexico in an effort to promote economic growth in both countries, but instead led to the loss of hundreds of thousands of farming jobs in Mexico. The devastation to Mexico’s agriculture industry likely propelled the increase in immigration from Mexico to the U.S. over the past two decades, and could explain some of the drug-related violence that continues to plague the country. Mexico’s apple growers also cast blame for the current situation on their government, which has largely failed to create structural support for domestic farmers in the wake of NAFTA. Nonetheless, farmers are trying to push for an investigation into the U.S. apple industry to see if it has been “dumping” below-market-value fruit into Mexican markets. If dumping has occurred, Mexico may be able to implement retaliatory tariffs and protect their domestic apple industry.

Did we miss anything important? Let us know in the comments below.