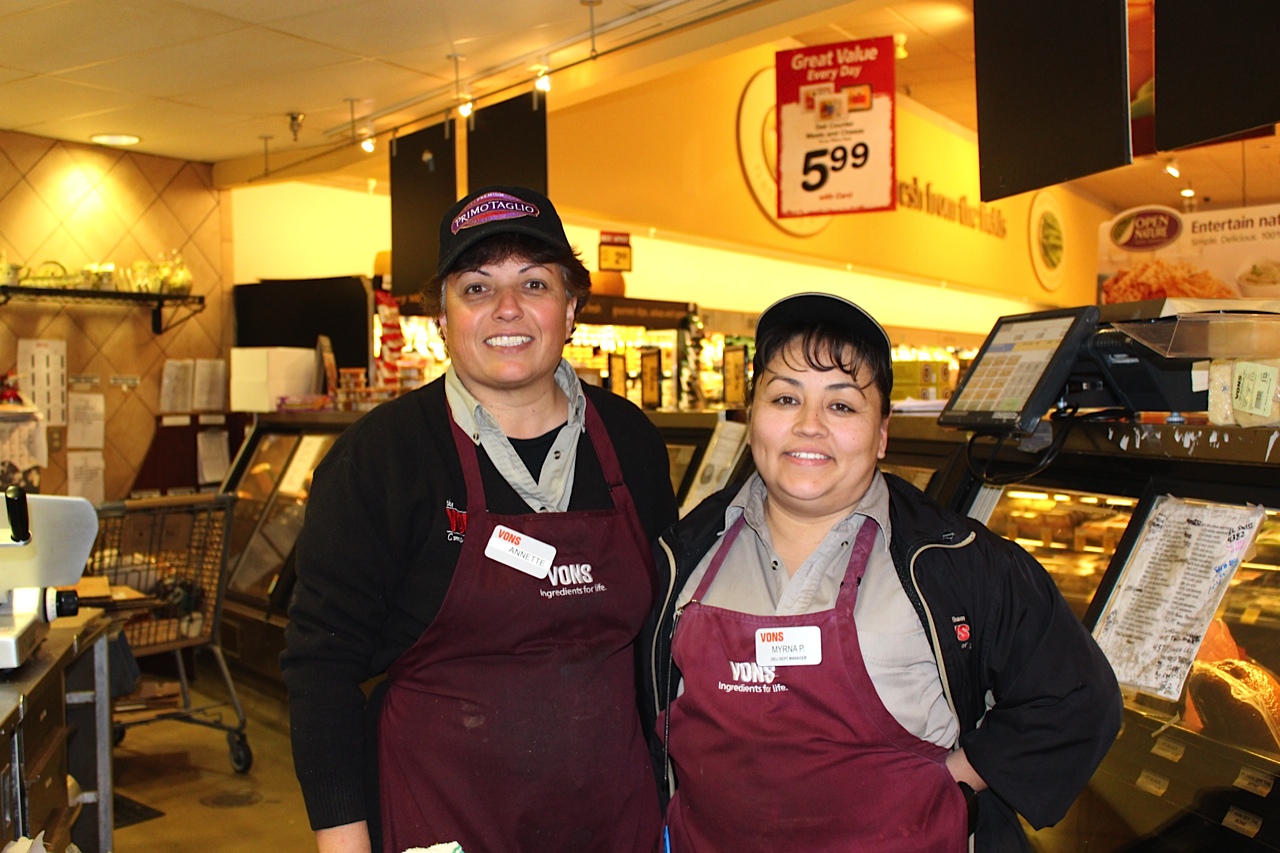 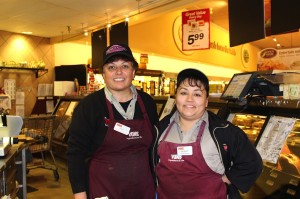 Have you ever bought groceries from a checker with the sniffles? If so, you’re probably not alone. In fact, most food retail employees can’t afford to miss work when they’re under the weather. Many don’t have medical coverage and few can cover lost wages when taking unexpected time off.

Janifer Suber, a clerk at Vons–a Los Angeles-based division of Safeway, Inc. with over 300 stores nationwide–says employees at her store often take matters into their own hands when a co-worker is sick. She recalls one instance when an employee had a stomach virus that had gotten so bad she missed several days of work, but only after co-workers had pooled their money to cover the co-pay for the doctor’s visit and the lost paycheck.

As Suber sees it, the lack of health coverage for food retail workers is also a public health issue. “Because you’re sick, you could pass on whatever you have to customers and other employees and that’s a chain reaction,” she warns. To consumers, she points out, “This affects your family. You’re going to take something that you shouldn’t take home to your kids, to your wife.”

When food retail companies refuse to pay workers adequately, it’s not just their colleagues who have to fill in the gaps. Taxpayers must also make up the difference to ensure their neighbors can get by. According to a new report called Shelved: How Wages and Working Conditions for California’s Food Retail Workers Have Declined as the Industry has Thrived (PDF), 36 percent of California’s food retail workers receive public assistance to meet basic needs, costing the state $662 million annually.

The report points out the cruel irony: “Workers who sell food in California, the largest producer of food in the U.S., are twice as likely as the general populace to be unable to afford sufficient quantities of the food they sell or the healthy kinds of food their families need, despite the financial health of the food retail industry.” 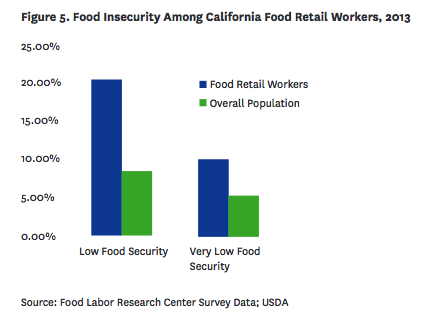 Shelved paints a grim picture of the overall California food retail sector (i.e., grocery stores): As big manufacturers reap ever-growing profits, workers in the industry actually lose money. Based on research from the Food Labor Research Center at the University of California at Berkeley, the report found that a nonunionized, low-price, low-cost business model has gripped the state’s food retail industry, causing a widespread decline in employee wages. And the implications stretch far wider than California.

As is the case in many parts of the U.S., giant retailers like Walmart and Target have captured a growing share of California’s grocery market over the past fifteen years. Walmart alone accounts for approximately 24 percent of grocery sales nationwide and has expanded rapidly in the past decade. These big box stores are notorious for their low wages and anti-union stance, and for creating an environment wherein smaller businesses must adopt similarly harmful labor practices in order to stay competitive.

Furthermore, grocery store consolidation has happened across the U.S. in recent years, and California is home to a high percentage of the nation’s chain stores, including 346 Krogers (the second largest food retailer in the country) and 503 Safeways (or more than 35 percent of its operations nationally). A surge in demand for “natural,” organic, and gourmet foods has also led to the growth of chains such as Trader Joe’s and Whole Foods, which are largely non-union. In addition, union grocer Albertson’s shuttered 13 stores in southern California in 2014 alone, adding to a steady decline in unionized grocery jobs statewide.

While unions aren’t immune to wage decreases—union food retail workers have experienced a disproportionate drop in wages—their members are still more likely to have higher median wages, access to healthcare, and full-time work than non-union workers.

The simultaneous decline in union groceries and the proliferation of non-union stores help explain why workers have seen their wages go down, despite an economically strong food retail industry. From 1990 to 2012, grocery stores saw a 23 percent bump in employment and general merchandise stores like Target and Walmart saw their employment figures jump a staggering 176 percent. Job growth in the food retail sector far outpaces overall job growth in California.

Yet, grocery workers’ hourly wages have fallen in that time. The median wage dropped from $12.97 in 1999 to $11.33 in 2010 in inflation-adjusted dollars. In contrast, overall private sector workers have seen a modest 1 percent wage increase over the same time period.

As a result, what were once reliable middle-class jobs now put a majority of workers below the poverty line at $22,400 per year for a family of three. Adding to workers’ financial strain, many retailers across the sector have pared down health and benefits packages for full-time workers and have cut down on employees’ hours to disqualify them for employer-sponsored healthcare.

Many of the ills plaguing California’s food retail workers are worse for people of color than white workers. In Los Angeles, for example, Latino and Black workers were three to five times more likely to be sent home from work early without pay, to have a shift canceled with no warning, to be denied a break or to experience wage theft. Meanwhile white workers were more likely to be promoted or offered additional on-the-job training than workers of color.

Jim Araby, Executive Director of United Food and Commercial Workers (UFCW) Western States Council, attributes some of these disparities to union/non-union divide. “There’s a story of two workforces,” he argues. “The unionized sector has been union for so long and these jobs are very good jobs. The demographic shift is more gradual on the union side.” As a result, people of color are more likely to occupy non-union jobs than white workers, many of whom have held union jobs for 30 years.

Suber, who is part of a union through Vons, believes that the racism that plagues the food retail sector is more subtle than it was in previous eras, making discrimination charges harder to prove on paper. “People can’t just come out and say the n-word to your face anymore, so they find different ways of discriminating against you based on the color of your skin,” she says. “It’ll take a little longer for you to get promoted. They’ll find a way and say, ‘This person doesn’t work as hard.’”

For example, the labor practices at Costco—currently the largest food retailer in California with 13.3 percent of the statewide grocery market—have been widely celebrated for its investment in its workers, from living wages to benefits packages. Furthermore, groups like Agricultural Justice Project, which just named the first Food Justice-Certified food retailers in New York State, and Restaurant Opportunities Center (ROC) have promoted employer-led initiatives to improve working conditions and wages for workers in the food industry.

Additionally, community organizers from OUR Walmart have helped prevent corporations like Walmart from taking over California’s coastal markets, a boon to unionized grocery stores and workers alike.

Despite sustained blows to food retail unions, Suber believes in fighting for livable working conditions for future generations. Unions, she adds, can help workers come together to take a stand against injustices and to eliminate fear from retaliation.

“We have to learn to overcome that fear and stand together so that these corporations know we’re not going to tolerate this. We just want a fair wage, fair healthcare…The people that came before me, I wouldn’t have what I have today if they hadn’t fought for my rights through the union. So I’m going to stand up, I’m going to continue to fight and pass the word along.”