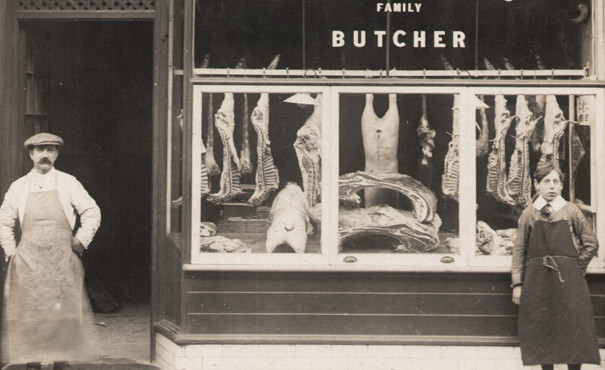 There are over 200 men and women in The Butcher’s Guild. They are the cutters and slingers who buy whole animals straight from the farm. They insist that their meat is never doped with antibiotics nor hormones. And, in a defiant stance against industrial meatpacking plants that slice through as many as 34,000 pigs a day, these butchers offer customers a conscientious product prepared with skill.

In 2009, Marissa Guggiana, author of Primal Cuts, and Tia Harrison, co-owner of the butcher shop Avedano’s Holly Park Market and co-owner of Sociale restaurant in San Francisco, decided to create a community of meat rebels. They wanted to build an organization where butchers could share their craft and vision for a better meat system.

Since then, membership has more than doubled each year. The Guild’s annual fall conference in Napa, California—the group’s main event—pulls in crowds for expert instruction, tastings, and the chance to talk shop with the best in the trade.

“The meat industry has been so destructive. But that means that it has the power to be hugely transformative, too,” says Guggiana. “Butchers are the fulcrum point between farmers and consumers. When a butcher decides to buy from a farm, they can transform a farmer’s entire business and influence how that farmer raises his animals, because they’re in touch with consumer demand.”

America’s 140,000 butchers are the closest that many customers will ever get to a farm. From behind the meat counter, they have the opportunity to teach people as much about animal husbandry and rural life as they do about how to cook a roast.

“Butchers can be such a force for good, if they’re awake,” says Guggiana.

It’s that commitment to being awake that the Guild stresses in its mandatory oath. To join, butchers (a designation that includes chefs who break down whole animals in their restaurants and farmers who process their own livestock) must vow to have a “good heart, source, hand and voice.”

Guggiana knows firsthand what a less progressive creed looks like. After years of writing plays in New York City, she came home to help her family run a meat processing company in Sonoma, California, where they repackaged cuts from Australia to be shipped to buffet tables in Las Vegas. Everyday on her way to the plant, she passed sheep grazing on local farms that had been bypassed by the global market in the name of efficiency.

“It didn’t seem like a right living to me,” she says of her family’s business in those days. She asked her father if she could try to source some of their lamb from neighboring farmers. But, as Guggiana discovered, buying from the farmer down the road can be more complicated than placing a bulk order online to a mega-distributor.

For one, small farmers have a limited, usually seasonal, inventory. Animals born in the spring might not be ready for slaughter until fall or winter, making summer a lean few months. Plus, when you buy a whole animal, you pay the same price per pound for the loin as you do for the neck. Yet, customers expect bargain prices on certain cuts and aren’t interested at all in others. A butcher can be left with six shoulders that they have to turn into sausage or spaghetti sauce before the meat goes south, which means a further investment of time on product that was expensive to begin with.

Then there is the issue of finding trained staff. Most meat is sold to restaurants and grocery stores already portioned out, so the art of breaking down an animal is increasingly rare even in professional food service.

Guggiana spent months encountering challenges and trying to improvise solutions. “I didn’t really know what I was doing at first,” she says. “I recreated the wheel and when I decided to interview butchers across the country for Primal Cuts, it was clear to me that we were all doing the same stupid stuff.”

Butchers weren’t talking to each other and so they were retracing steps and repeating mistakes. “Every butcher I spoke to wanted to know how other butchers were making money. They wanted gossip, business strategies and recipes,” she says. “I don’t think they knew they were a community yet.”

At this point, Guggiana joined forces with Harrison, who had the idea of launching an industry-wide conference. The two women chose the model of a guild, since throughout history butcher guilds were some of the strongest at preserving their craft, rewarding excellence and ensuring the next generation of practitioners.

The Guild now hopes to earn non-profit status and expand its reach through regional chapters that can lead initiatives throughout the year. The organization is currently raising funds through a Barnraiser campaign as they prepare to launch into the next stage of their meat revolution.

This year’s conference runs from September 9-21 and will examine the “Future of Meat,” with a particular focus on how the “great minds of protein can build a language and a brand for good meat.”

“Big meat has co-opted all of our words like ‘sustainable’ and ‘natural’ and is waiving them about like a drunken sailor,” says Emily Green, the Guild’s public relations and marketing manager. “We need to take back our power…”

As Harrison smartly put it in the Guild’s fundraising video: “Good butchers buy good meat from good farms, which improves local economies and the environment.” Maybe the message is as simple as that.