All the News That's Fit to Eat: Superweeds, Young Farmers, and a Move to Protect Honeybees | Civil Eats

All the News That’s Fit to Eat: Superweeds, Young Farmers, and a Move to Protect Honeybees 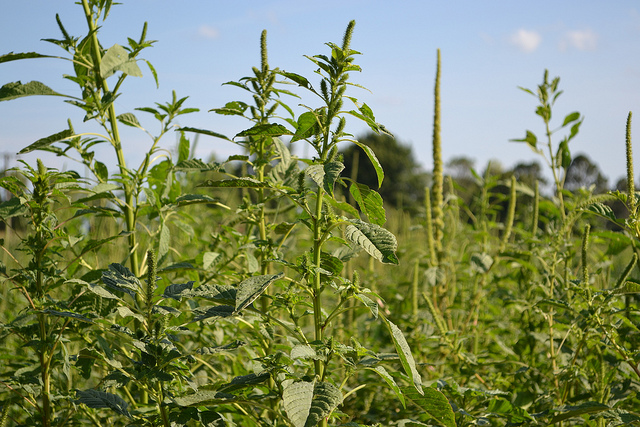 Here are the food news stories that caught our eye this week. Have a great weekend!

Farmers in Iowa are concerned about the discovery of Palmer amaranth, an herbicide-resistant weed common in the South, on farms in five counties across the state. The weed spreads like wildfire, with one plant capable of producing over a million tiny, durable seeds and growing up to two inches a day, and threatens commodity crops like corn and soybeans. If Palmer amaranth continues to spread across Iowa, the state could lose nearly two-thirds of its corn and soy crops–a blow of $11 billion to its agricultural economy. Around 90 percent of the corn and soybeans grown in the U.S. is genetically modified (GM), which means it’s been bred to stand up to strong chemical herbicides like glyphosate that farmers routinely spray on their fields for weed control.

However, with superweeds like Palmer amaranth becoming resistant to such herbicides, the only seemingly viable solution is to develop even harsher sprays. Environmental groups like the Union of Concerned Scientists and the Center for Food Safety point out that large commodity farms aren’t set up to withstand weed invasions sustainably and must rely on harmful practices like over-tilling and rampant herbicide use to protect their crops. Dow AgroScience, an agricultural chemical company, is pushing EPA to approve their corn and soybean plants that have been genetically engineered to resist 2,4-D in addition to glyphosate, which could spell disaster for Iowa’s environmental and public health. 2,4-D is a compound found in Agent Orange, the chemical weapon used during the Vietnam War.

With the invasion of Palmer amaranth in Iowa’s corn and soybean fields, this could be an opportunity to pressure EPA to support a shift toward more environmentally sound farming practices. The agency will receive public comments on Dow’s request for approval for GM corn and soy until June 30.

The Center for Science and Democracy, a branch of the Union of Concerned Scientists (UCS), released a report this week that found that Big Food frequently tries to bury research that points to sugar’s harmful effects on public health. Two of the biggest culprits are the Sugar Association and the Corn Refiners Association, a pair of industry front groups that dismiss the links between over consumption of sugar and several diet-related diseases, including diabetes and heart disease. Companies that have a stake in the sugar market (i.e., almost all processed food companies) typically enlist their own scientists to “debunk” independent research on sugar. Lobbying groups then use this data to sway members of Congress and federal agencies to weaken nutrition standards, from school meals to nutrition labels. UCS recommends that any study published on sugar’s effects on health reveal potential conflicts of interest in order to increase transparency in policymaking.

3. New USDA Website Aims to Get Young Americans ‘Back to the Land’ (The Los Angeles Times)

In an effort to draw more and more young people into farming as a profession, USDA has launched a website designed as a one-stop shop for beginning farmers. The site consolidates information on a range of agricultural policies, loan and financing opportunities for new farmers, and technical assistance in order to support the next farming generation. Beginning farmers face several unique hurdles to starting successful businesses (a reality not helped by the recession and a sluggish recovery), including a lack of access to start-up capital, limited experience in the fields, and barriers to land ownership. USDA seems poised to begin addressing these concerns, noting that the majority of current U.S. farmers are due to retire in the coming decade. It’s crucial that farmers getting their start today are prepared to feed our country in the future.

The Obama administration topped off last week’s National Pollinator Week by creating a new inter-agency task force designed to protect declining populations of bees, butterflies, bats, and birds. These pollinators are crucial for both the U.S. and global food supply, with over one third of crops grown in the U.S. relying on these animals to reproduce and thrive. Sadly, honeybees in particular have been experiencing colony collapse disorder, an increasingly common phenomenon that wipes out large bee populations and jeopardizes the stability of the agriculture industry.

The task force, headed by Secretary of Agriculture Tom Vilsack and Environmental Protection Agency (EPA) Administrator Gina McCarthy, is the first of its kind, and many see it as a step forward on the President’s efforts to curb climate change. Part of the task force’s role will be to protect and expand pollinator habitats, and to educate businesses and individuals about safe practices to ensure pollinator health. While some are praising Obama for moving in the right direction, many environmental groups are still pushing for the President, USDA and EPA to limit the use of neonicotinoids, as these pesticides are a principal factor in contributing to colony collapse disorder.

Efforts to curb an on-going Salmonella outbreak linked to Foster Farms chicken are taking shape on Capitol Hill. Representatives Rosa DeLauro (D-CT) and Louise Slaughter (D-NY) have introduced a bill that would give the USDA Food Safety and Inspection Service (FSIS) the authority to recall meat contaminated with antibiotic-resistant forms of salmonella, such as the one that has been cropping up in Foster Farms chicken for over eight months. Previously, FSIS claimed they didn’t have the executive authority to force a recall, which left Foster Farms on its own to issue a voluntary recall (they haven’t). Thus far, illnesses related to the Salmonella outbreak have been reported in 27 states and Puerto Rico, with a surge in cases over the past few weeks. While USDA has not taken an official stance on the legislation, the bill’s authors are hopeful that it will help eliminate an on-going public health risk in poultry processing.

Lawmakers in New England are hoping to expand the market for so-called “trash fish” by pushing USDA to purchase surplus supplies of spiny dogfish to serve in the National School Lunch Program. Environmental pressures and overfishing in the north Atlantic have shrunk the populations of common whitefishes like cod, leaving growing numbers of less popular fishes in their wake. Some of these species, like spiny dogfish, are high on the marine food chain, and as a result have higher levels of mercury in their systems than other commercial fish populations. High mercury content in fish has been linked to health problems, and young children are particularly vulnerable to risks from eating mercury-laden seafood. Studies show that samples of spiny dogfish have an average mercury concentration of 0.5 parts per million–well over the FDA’s safety threshold for fish consumption. Furthermore, schools are not likely to label products made with dogfish, like fish sticks or tacos, meaning that children and parents would have no way of knowing whether they were being served the high-mercury fish.

Did we miss any other big stories? Tell us about them in the comments below.